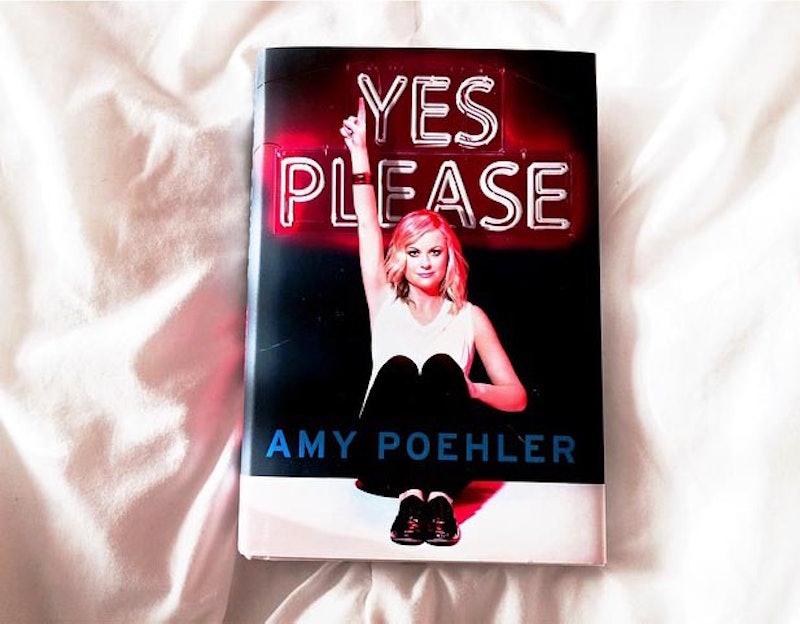 Finally, in 2014, the word "feminism" was more important than ever before. Even Hollywood stars were reclaiming the word "feminism," and it was fantastic to see a heightened awareness of women's issues in the public consciousness. (See, not all of 2014 sucked.) If all goes well, we'll continue to see that fire spread straight into 2015.

Whether that happens, however, isn't just up to Hollywood: it's up to us, too. We have to stay energized, educated, and connected to each other, and we have to keep talking up what's important to us. These conversations won't just be about abortion rights, equal pay, and maternity leave (which, of course, they'll include) — they'll also center on funny culture quirks like the decline of the Brazilian wax, "mansplaining," and whether or not a real feminist can love songs with misogynistic lyrics.

That's where this book list comes in. For 2015, I picked out 15 books that each give a vibrant take on feminism. That's the 360-degree view of feminism — not just for the academic or the political or the reluctant ones. The stuff that's in these pages is what's going to keep the conversations lively, and keep feminism at the forefront of everyone's minds in the year to come.

So, whether you're a diehard feminist who knows what she's all about, a confused one who's not totally sure how to wear the term, or a person who is a bit weary of the F-word, there's a book for you below. Pick out one for your New Year reading list.

How to Be a Woman by Caitlin Moran

This book reminded me how to be a badass woman. It also caused me to almost pee my pants laughing at least 10 times. Moran uses cheeky British sarcasm to call out what she dubs "All The Patriarchal Bullshit." She urges women — all women, of all ages — to reclaim the word "feminism."

We need to reclaim the word 'feminism'. We need the word 'feminism' back real bad. When statistics come in saying that only 29% of American women would describe themselves as feminist — and only 42% of British women — I used to think, What do you think feminism IS, ladies? What part of 'liberation for women' is not for you? Is it freedom to vote? The right not to be owned by the man you marry? The campaign for equal pay? 'Vogue' by Madonna? Jeans? Did all that good shit GET ON YOUR NERVES? Or were you just DRUNK AT THE TIME OF THE SURVEY?

As a feminist who has watched trashy TV and mouthed the words to way too many blatantly misogynistic songs, Gay's collection of essays gave me hope that I — an imperfect person who has my moments of confusion about women's issues — can still call myself a feminist. Gay uses her experience as a woman of color, a college professor, and a pop culture critic to slice into what's wrong with our society today.

I believe feminism is grounded in supporting the choices of women even if we wouldn’t make certain choices for ourselves.

When Wolfe suffered an injury to her spine that caused a major drop in her ability to orgasm, she embarked on a quest for information about the vagina's link to the brain. I would describe this quest as academic/medical/gigolo-y — she does at one point research a male masseuse with a very particular specialty. Using tons of medical evidence, she proves that sexual violence and even negative comments about the vagina shut down synapses in the female brain and prevent a woman from thriving. She also finds that good consensual sex with a respectful, thoughtful, communicative partner (yes, even if that partner is a fling) can make a woman happier, more confident, and more creative.

Many of the signals that either stoke or diminish female desire have to do with the female brain's question: Is it safe here?

The Wife Drought by Annabel Crabb

Ever come home from work, collapse, and waste the night away watching Netflix... only to realize that you, a working professional, are out of clean underwear for tomorrow? During these moments, I picture the typical overworked, full-time employed mother's post-work plight and feel a pang of sympathy. Crabb understands how today's moms tick; she draws a clear picture of a modern household and concludes that working women need wives! Not real human ones, but a variety of mitigating forces like paid-for housework and childcare, a spousal balance of chore-doing, and respect for the hard work that "housewifery" is. Because no one should have to do it all, and because a homemaker of any gender's work must be respected.

If we value work at home then we should value it properly, and that means not just lamenting that women don’t get paid for it, but also that our system doesn't really encourage men to do it.

Want to become a better feminist... and person? Read the late Angelou's collection of poems. Her voice breaks your heart and heals it at once. It's not a wonder that this woman's writing has touched millions. If poets are the soul of a nation, then this self-proclaimed feminist's words prove there's hope after all.

You may write me down in historyWith your bitter, twisted lies,You may trod me in the very dirtBut still, like dust, I’ll rise.

How to Build a Girl by Caitlin Moran

Yes, another Moran title on this list. If there were some kind of international prize for brutal honesty that makes you cry-laugh, Moran would win it. In this coming-of-age novel, How to Be a Girl draws from the author's early life as a working-class girl with humor and a healthy dose of British swear words. Moran doesn't apologize for — and in fact, she relishes in — the troubling, not-so-ladylike experiences of her youth. And I love her for it.

Because what you are, as a teenager, is a small, silver, empty rocket. And you use loud music as fuel, and then the information in books as maps and coordinates, to tell you where you’re going.

You know those subtly sexist moments that either caused your head to explode or suddenly go numb? Solnit has had those too, and she offers insight on how to handle these situations in her collection of essays. When Solnit describes the experience of being condescended to via mansplaining, you'll feel like she's reading a page straight from the book of your life. Her essays contain witticisms and dark humor, but the takeaway — that sexism is not something anyone has to put up with — won't elicit much giggling. This is a brave book.

After my book Wanderlust came out in 2000, I found myself better able to resist being bullied out of my own perceptions and interpretations. On two occasions around that time, I objected to the behavior of a man, only to be told that the incidents hadn't happened at all as I said, that I was subjective, delusional, overwrought, dishonest — in a nutshell, female.

Babygate: How to Survive Pregnancy and Parenting in the Workplace by Dina Bakst, Phoebe Taubman, and Elizabeth Gedmark

It's rough out there for expecting moms and couples — they're often discriminated against with built-in employment policies just because they're building a family. This book is a roadmap, complete with quizzes, testimonies, state-by-state laws and regulations to be aware of, plus comparisons to countries outside of the United States. (Prepare to be very jealous of Swedish people.)

Who needs consciousness-raising and equal pay when you’re an Amazon with an invisible plane?

Into the Go-Slow by Bridgett M. Davis

Davis' debut novel, Shifting Through Neutral, was a finalist for the 2005 Hurston/Wright Legacy Award, and she's made some noise again with this novel. Into the Go-Slow's intriguing plot has a universal appeal for anyone searching for her feminist identity: After her sister's death, Angie, an African-American college grad living in Detroit, takes off to Nigeria to retrace her beloved sibling's final steps. What she uncovers forces her to decide what type of woman she wants to be.

Afterwards, she made a cup of tea with sugar and pet milk and sat at the kitchen table. She could hear Funke getting out of bed. Rain poured in sheets. Out of nowhere, the fan in the main room came on and the mini refrigerator hummed — a magical burst of electrical current running through the house. That gave her resolve. When Funke walked into the room, Angie said, “Tell me what you know about [my sister] Ella.”

The Abramson Effect by Debora Spar

If you've ever been frustrated with the way people treat or talk about your female boss, or if you are that female boss, you won't want to miss Spar's insights. Jill Abramson's famous firing shortly after her debut as executive editor of the The New York Times raised, and still raises, many questions about how comfortable Americans are with female top-dogs. The story of how this firing came to be conjures many questions about gender and leadership. As Spar puts it, "This stuff doesn't happen to men. It just doesn't."

I was in a book group in 1973 ... We read The Feminine Mystique one week, and the next week everyone went out and got a job. The book group never met again.

Pollitt argues that women's abortion rights are being eroded right now, and she calls for a stop to it all. Citing statistics and historical tragedies that serve as a slap in the face to anyone working to take away a woman or family's right to choose abortion as an option, Pollitt's meticulously proven points empower every reader.

It is an essential option for women — not just ones in dramatic, terrible, body-and-soul-destroying situations, but all women — and thus benefits society as a whole.

Want to laugh? Want to be inspired by Poehler's killer attitude? Here you go. Poehler lights a fire under her readers to dream big, peppers the journey with a healthy dose of irony and self-deprecation.

What will it take to make a woman president here in the United States? The conversational tone of this book appeals to readers young and old, and its emphasis on interviews of an array of famous, fascinating people — people like Gloria Steinem, Maya Angelou, Nancy Pelosi, Nicholas Kristof, Melissa Etheridge — make it fun to read. Their answers to the question the title poses will hurt you, inspire you, and make you a better leader.

It does seem a bit crazy when you think of it: When so many other nations have women presidents, why doesn’t the United States? Margaret Thatcher was elected prime minister of Great Britain three times. Argentina, Iceland, the Philippines, Nicaragua, Ecuador, Finland, Ireland, Liberia, Chile, and South Korea have elected female heads of state. Yet the United States, presumably one of the most progressive countries in the world, lags dismally behind.

We Should All Be Feminists by Chimamanda Ngozi Adichie

Gracious and witty, Adichie argues that gender should not be a script for raising boys or girls. She comes across as a warm and nurturing person, like that big sister, auntie, or teacher that inspired you (or that you wish you had). She touches upon serious matters such as sexual violence, as well as the more subliminal insidious behaviors that marginalize women and limit men around the world. Her message is a positive one: culture can change if we do.

More like this
Who Is Pete Davidson Dating? He "Courted" Emily Ratajkowski At A Knicks Game
By Jake Viswanath
Cyber Monday Deals 2022: The Best Fashion Sales To Shop
By Dominique Norman
44 Impressive Secret Santa Gifts That Won't Break The Bank
By Sadie Trombetta and Lauren Grant
Under-The-Radar Fashion & Beauty Deals You Don’t Want To Miss
By BDG Commerce
Get Even More From Bustle — Sign Up For The Newsletter