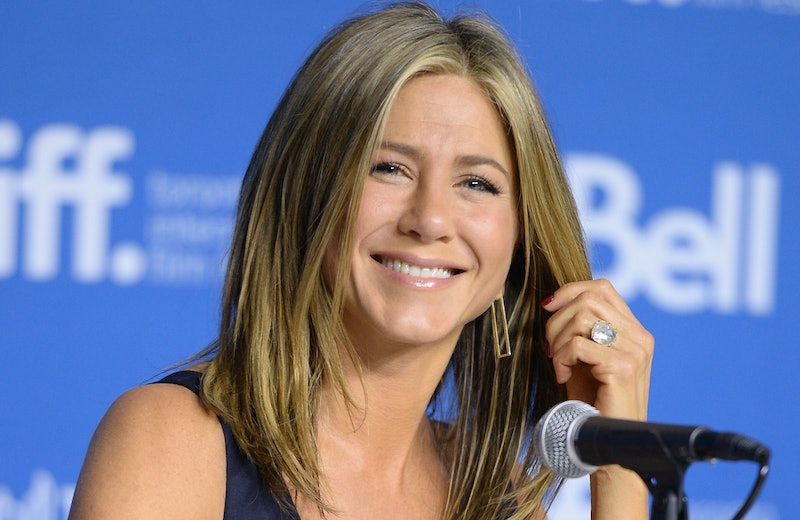 Like most women, I love me some Jennifer Aniston. I will never let go of her endearing portrayal of Rachel Green on Friends . I will always be jealous of her perfect hair and eternal tan. I will never stop reading tabloid articles about her imaginary pregnancies, marriages, and feuds. (Especially Aniston's ongoing feud with Angelina Jolie — that only exists in the minds of the media.) I will always use her men's magazine covers as diet and fitness inspiration. Even with all of that devotion, I never ever thought that I would be talking about Jennifer Aniston as a serious actress. Yet here I am.

There has been a lot of buzz around Aniston's performance in the movie Cake, and the award show nominations have already started rolling in. On Wednesday, the Screen Actors Guild nominated her for an award. On Thursday, she is apparently also up for a Golden Globe. And now I am wondering if this is a sign of the awards season to come. Is there a stream of nominations in Aniston's near future. Will Aniston be an Academy Award nominee? Better yet, will Aniston be an Academy Award winner? I never thought I would realistically ask that question.

It is definitely surprising, but so great for her if it ends up happening. How did Aniston go from being a beloved sitcom star to the lead actress in romantic comedies to a serious contender for some Oscar gold? It was once an improbable thought, but it's very close to becoming a reality. Why do I think that? The SAG and the Golden Globe winners have been known to be fairly accurate predictors in the Oscar race.

The Golden Globes have a little bit of an unfair advantage since there are actually two different categories for film actresses — Drama and Musical or Comedy. These means that they have twice the amount of nominees and winners to throw out there to end up predicting all of the Academy Award contenders and champions.

Additionally, Anthony Breznican, a film writer who has covered award shows for 14 years with Entertainment Weekly, has explained that the Golden Globes can serve as a good indication of Oscar nominations and winners, because the Hollywood Foreign Press members want to reward movies that they feel will also be future Oscar contenders. It's a group of less than 100 members and this correlation adds to its legitimacy. He added, "It's more about 'how can we honor ourselves by giving out the awards,' rather than who could use the exposure."

So it's not about giving Aniston a surprisingly serious nomination for the sake of doing so or for the sake of gaining press coverage. The Hollywood Foreign Press strives to be accurate and on point, and this could very well mean that Aniston is on the Oscar track.

The SAG Awards have an even better track record when it comes to Oscar accuracy. Since its first awards show in 1995, the guild's acting nominations and winners have predicted the Academy Awards' nominations and winners more consistently than any other award show. So this is definitely a good sign of things to come in Aniston's future.

Whether Aniston receives an Oscar nomination or not, she has really come a long way from her role on Friends and she should be proud of the accolades she has received thus far. Plus, she has to be sneering at Jolie's lack of nominations this year. (You know you were thinking it too.)