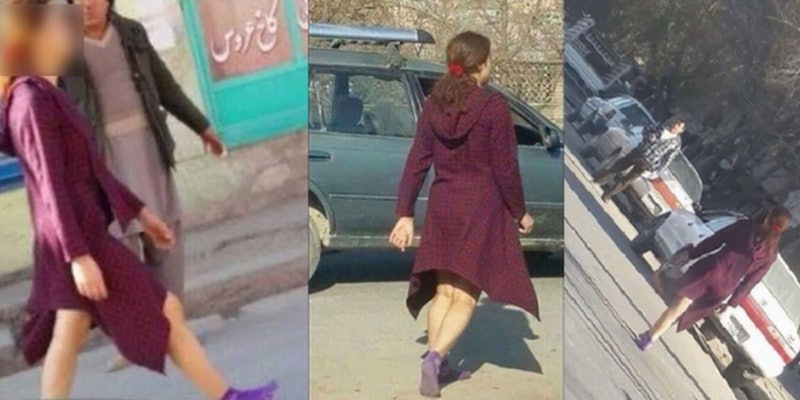 A woman in Kabul was recorded walking around the city in a dress that exposed her legs, an incredibly brave and dangerous feat in a country where, due to Taliban rule, women are required to wear full-body clothes that cover all skin. Hyat Ensafi, a local journalist who took the photo, posted it to Facebook where thousands of users commented on it, either in defense of her radical actions or in opposition. Ensafi told BBC he was shocked and said, "I knew I had to catch this special moment because I never saw a woman here walking down the streets like this." Though Ensafi tired to track her down for comment after the photo was taken, she walked away very quickly.

The issue of women's rights in Muslim countries is complicated. Due to Islamic law, many Muslim countries require women to cover their heads and show little to no skin. In Iran for example, women are required to cover their heads and in Saudi Arabia women are required to wear the hijab (head covering), abaya (a full black cloak that doesn't show the outline of the body), and niqab (face-covering). A lot of Western media and opinion calls this sort of body policing inherently restrictive, which I agree is true when enforced as law. But it's important to remember that showing skin isn't the only way for a woman to feel empowered; in fact, many women say that covering their skin to the extent that they do in Muslim countries is a feminist act and empowers them. Conversely, for some women to be able to reveal their skin is an important part of their feminism.

As long as women are able to make an autonomous choices about their bodies (which, unfortunately, they can't in places like Afghanistan), there's no right or wrong answer.

More like this
25 Quotes About Love To Share During Pride Month 2022
By Madeleine Aggeler and Emma Garza
How To See The Lunar Eclipse On May 15-16, 2022
By Kaitlyn Wylde
What The History Of Pride Month Means For Celebrations Today
By Jay Polish
Is TikTok’s “Villain Era” Trend Just An Excuse For Bad Behaviour?
By Chanté Joseph
Get Even More From Bustle — Sign Up For The Newsletter