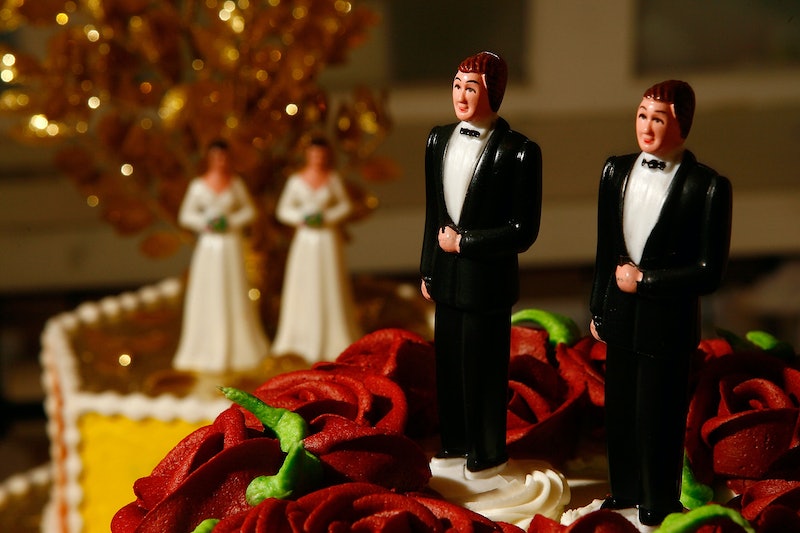 Opponents of gay marriage, this one is for you. New evidence from the Williams Institute suggests that same-sex couples are less likely to divorce than heterosexual couples, so anyone who has ever argued that gay couples are "ruining" the sanctity of marriage, well, it looks like you're totally and completely wrong. Oops.

According to data gathered and analyzed by the Williams Institute (a research group focused on "sexual orientation and gender identity law and public policy" at UCLA), within the first four years or so that same-sex marriage has been legal in New Hampshire and Vermont, just 1.1 percent of same-sex marriages have ended in divorce. If you include the data from six more states regarding same-sex civil unions and registered domestic partnerships, the same-sex dissolution rate per year ticks up to about 1.6 percent of all legally-recognized partnerships. Both of these same-sex splits per year rates are lower than the 2 percent of heterosexual marriages which dissolve per year in the United States.

As the Williams Institute also points out, the number of same-sex couples choosing to get married following the Supreme Court's 2013 Windsor decision is rising quickly — even in states where same-sex marriage was already legal. This suggests that as public opinion of same-sex marriage continues to improve, more and more couples will be drawn into the institution (even those couples who were previously unsure about marriage), though these couples may or may not be more likely to divorce in the long-run, so continued analysis is required.

Unfortunately, persisting inequality in marriage laws also makes it more difficult for same-sex couples to separate: as a same-sex spouse, you can't get a divorce in your home state unless that state recognizes your marriage in the first place, which could partially account for why divorce rates are so low.

But as long as we're talking about positive news, here's some more food for thought: according to another recent study published by the University of Melbourne earlier this summer, children of same-sex parents may fare better than those of similar heterosexual couples too. So advocates of "traditional" marriages and families, take that.