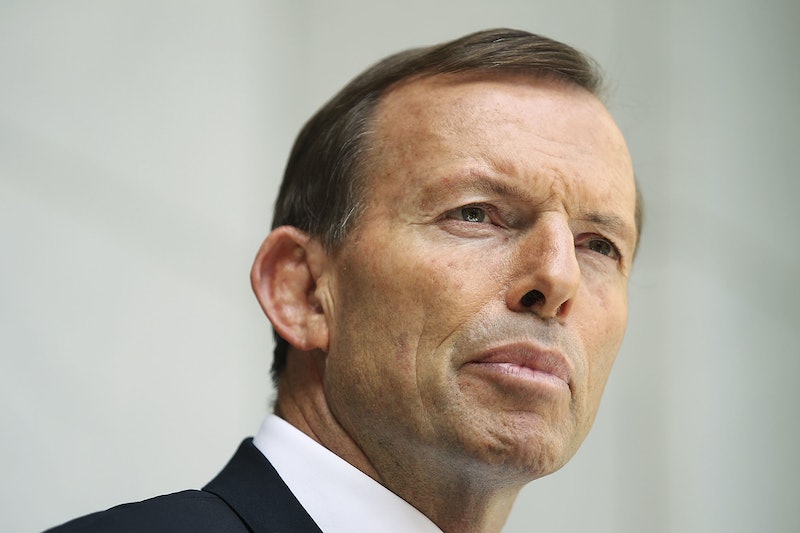 EARLIER: Following reports that at least one gunman in Sydney had taken over a dozen people hostage in a chocolate shop and that the Sydney Opera House was evacuated due to a suspicious package, Prime Minister Tony Abbott took to the podium to address what he knew about the incident. And, as with most unfolding events as confusing and upsetting as this one, the politician could reveal very little about the hostage situation. As he said, "This is an unfolding situation, and as the situation unfolds, there will be operational updates provided by the New South Wales Police. I want to assure people that the ordinary business of government should go on and it will go on."

That said, his statement wasn't entirely free of details. Though Abbott made sure to mention that, in these cases, "all sorts of claims are made, so I do urge everyone to exercise caution in their reporting," he also hinted that the hostage situation could be politically motivated. That's likely thanks to the fact that news cameras captured two female hostages hanging up an Islamic military flag in the window, seemingly forced by a gunman. Said Abbott:

The whole point of politically motivated violence is to scare people out of being themselves. Australia is a peaceful, open and generous country. Nothing should ever change that, and that's why I would urge all Australians today to go about their business as usual.

Earlier in the day, Abbott released a statement about the incident, clearly trying to help citizens of Australia keep calm. Read the statement:

New South Wales Police and the Australian Federal Police are currently responding to a reported hostage-taking incident in Martin Place in Sydney.

I have spoken with the NSW Premier Mike Baird and offered him all possible Commonwealth support and assistance.

The National Security Committee of Cabinet has also convened for briefings on the situation.

This is obviously a deeply concerning incident but all Australians should be reassured that our law enforcement and security agencies are well trained and equipped and are responding in a thorough and professional matter.

We will provide regular updates as further information becomes available.

And updates certainly seem necessary. Very little at this point is known about the hostage situation — including just how many hostages there are. Some outlets are reporting 12, while others say the number exceeds 50.

Abbott isn't the only one hoping speculation remains low during the situation, with the police in Sydney urging media to "be responsible in their reporting." The statement also encouraged those in the area to remain indoors and "stay away from open windows," and confirmed that evacuations in offices in the area have taken place.