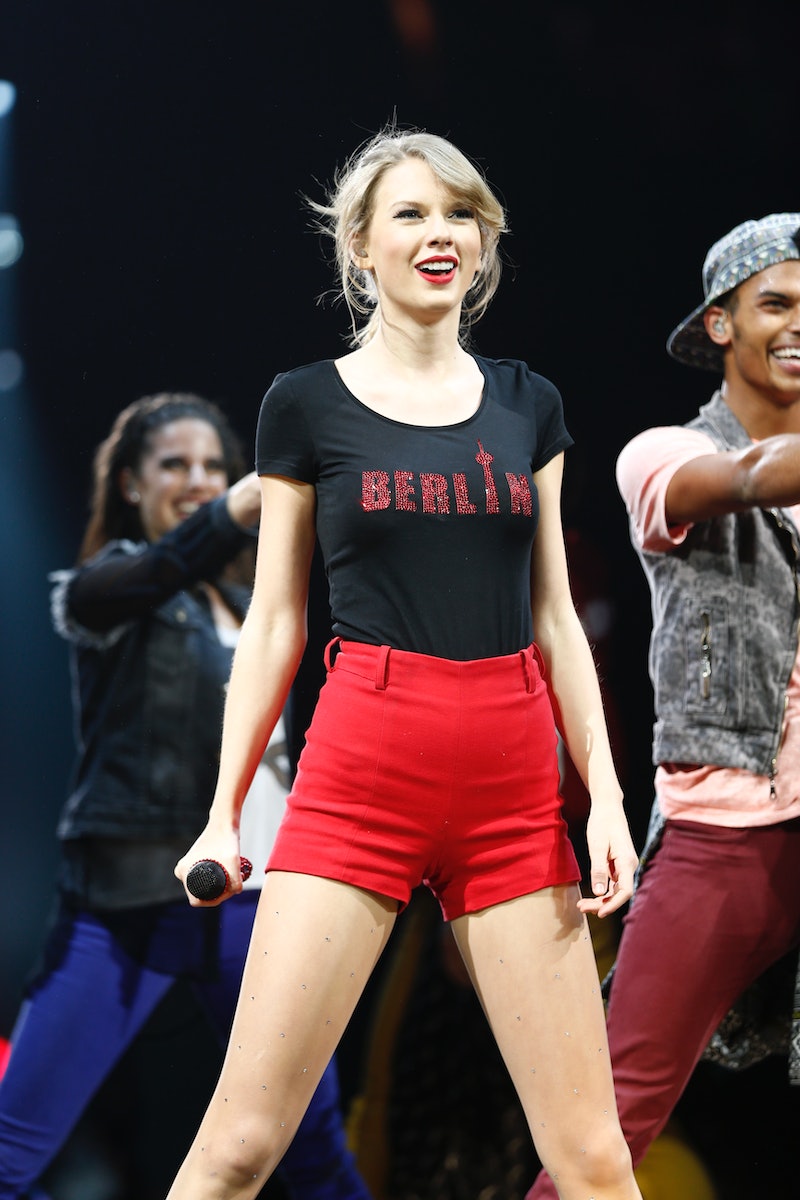 Guys. You guys. It's finally happening. I don't know about you, but ever since Taylor Swift's latest offering 1989 came out, that album, plus her feminist awakening, cemented her as one of the celebrities you need to watch and idolize out there in the world today. I mean, she's no Beyoncé, but her star status has definitely moved from love-her-or-hate-her-and-her-music to love her-love-her-WHY-AREN'T-YOU-LOVING-HER. You know you've truly "made it" as a celebrity when Beyoncé and Jay Z attend your 25th birthday party; it's exactly like having the American Prince William and Kate Middleton at your celebration. However, it appears that Swift's wild birthday weekend didn't end there, as Swift and Beyoncé also attended a Justin Timberlake concert — at which Jay Z got on stage to help Timberlake sing "Holy Grail."

That sentence has too much epicness in it for me to handle, but it does beg a very important question: are Swift and Beyoncé now best friends? "Blank Space" might have claimed the 1989 singer has a long list of ex-lovers, but the rest of us know that Swift actually has a long list of best girl friends. In fact, it constantly feels like she's picking up more and more of them every day. Does this weekend stand as proof that Beyoncé is about to become the latest? Should we expect to see Swift dancing around in the background of Beyoncé's next "7/11"-esque music video? Will Swift start emblazoning Jay Z's lyrics in needlepoint to give to Beyoncé?

Um, I hope so. Beyoncé might be the queen, but Swift is a rising princess and there are plenty of good reasons for why the two of them need to be best friends right now.

I'm not saying every feminist in the world has to know each other and get along as if we're all members of some kind of secret feminist club/army waiting to take over the world, but the number of celebrity feminists that are willing to identify with and own the word are few and far between these days. Beyoncé is fighting for the legitimization of the feminist movement in mainstream culture and Swift admits she is learning, and still has a lot she wants to learn, about the movement. The two of them could benefit from one another.

2. They Both Love to Dance

Much love to Swift, but one of them is significantly better at dancing than the other. And that one of them is Beyoncé. But, hey, Swift has got the hair flips and the back arching down, so maybe Beyoncé could teach her a few smooth moves to break out at the next award show. Then again, Swift owns her awkward dancing and I'd hate for that to be taken away from her when I love it so much.

3. They're Both the Subjects of a Lot of Romance Rumors

All I'm saying is, they've both been touched by royalty, which would practically make them royalty if they weren't already. Imagine Swift and Beyoncé (and Jay Z) getting invited to the same party that Kate Middleton and Prince William are throwing. Just imagine.

5. They Both Have Great Hair

What do you mean this isn't a good basis for a friendship? You know nothing, Jon Snow.

6. They're Both at Good Places in Their Lives

For what seems like the first time in her career, Swift knows who she is, what she wants, and what she doesn't want. She's calling all the shots, she's making her own decisions, and she's making music that, quite frankly, she should be incredibly proud of. Meanwhile, Beyoncé did something no artist has ever done and dropped a surprise album that catapulted her to superstardom instead of bombing. They're both at such good places in their lives that a friendship between them could only help them grow even more.

All right, so Swift hasn't done a duet with Lorde or Selena Gomez or any of her celebrity friends who are singers. But I heard that mash-up of "XO" and "Out of the Woods" and now I want it to happen for real, you guys.