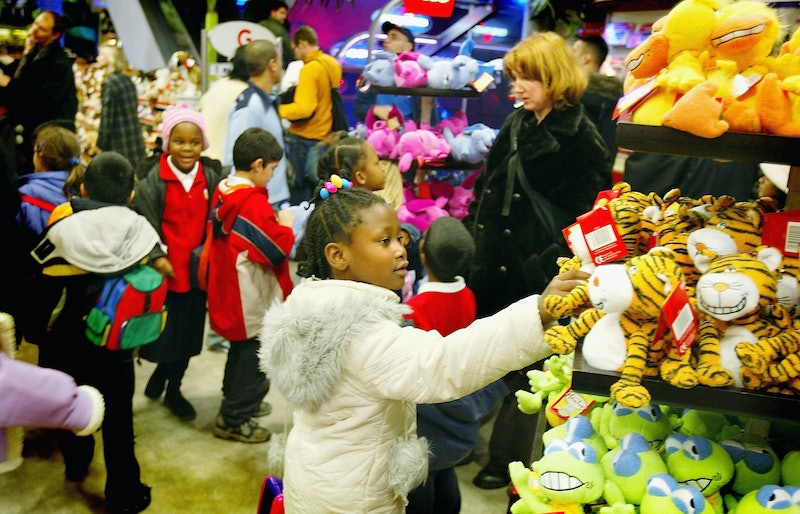 A few months after I turned fourteen, I started working at a toy store. At first, I was only a gift wrapper (it was the holiday season), but my manager decided to give me more responsibility after I had “proven myself” on the wrapping circuit. On Christmas Eve that year, she let me answer the phone for the first time. I can remember it so clearly: I picked it up and said the greeting I’d rehearsed for like an hour, and the woman said, “Do you have Tickle-Me-Elmo?” (Note: this happened to be the apocalyptic Tickle-Me-Elmo year when all the stores were sold out. The fact that she was calling this late in the game was already pretty sad.)

“Sorry, no, we actually don’t carry Mattel products,” I said, and you have to understand, I was so proud of myself for knowing that. In my script of how-the-world-should-work, the woman would reply, "Wow! Thank you so much for that helpful and well-informed answer. I’ll try somewhere else. Great job, kid!" Instead what I got was, “What the f*ck? You don’t have f*cking Tickle-Me-Elmo at a toy store? Are you sh*tting me right now?! What the hell am I supposed to—”

I hung up. Right in front of my manager. I just slammed the phone down and opened my mouth to explain. When nothing came out, she just shook her head and said, “Don’t even worry about it.”

She already knew what I would come to learn over the course of working Christmas Eve over the next four years: Just under the veneer of hot cocoa and holiday cheer, there exists inside of us all a hellish, angry beast ready to be unleashed. Here is the sum of what I learned about humanity from all those Christmas Eve shifts:

Your life is not as valuable as someone else's parking spot

People even cut me off in the parking lot so they could get in toy store. Like, did they realize they were not going to get in there unless I have parked my vehicle and opened the store myself, right? Did they think they and their impressively large Lexus was just going to break in by punching a hole through the door, powered by their gift-rage?

I don't mean to brag (is something I say when I'm about to brag), but I am the master of gift wrapping. If it were a timed sport, I would have won gold medals at the Olympics. There are very few things in this world I will actually, genuinely, shamelessly brag about, and my gift-wrapping skill is one of them (my other is picking good topping combos for pizza). On top of having impressive little ol' me in their employ, our store offered FREE gift-wrapping. They weren't even allowed to tip us, so there wasn't a catch. We were just nice humans.

This does not stop each and every parent who has the gall to shop on Christmas Eve from breathing down your neck and trying to backseat gift wrap. They will rage if you use a perfectly good, unbent scrap of paper instead of pulling a new one off the roll; they will writhe in agony if you wrap something horizontally when they wanted it vertically; and no matter how many times you swear on Santa's life that you took the damn price tag off, they will make you unwrap the whole damn thing and show it to them before they believe you.

Divorce can be ugly

One of the most memorable Christmas Eve customers we ever had walked into the store and asked for all the noisiest, cheapest things we had. I assumed his family was traveling and he was shopping in advance for New Year's Eve, and since we didn't have a lot of dads come into the store to surprise their kids, it struck me as really sweet. That is, until he confessed he was trying to get the most annoying things ever for his kids, who were spending Christmas with the ex-wife he was apparently not too fond of. #dark

A lot of last minute Christmas Eve shopping is totally justified. "I hope Santa knows I want that T-Rex stuffed animal," a small child chirps that very morning, and whoosh—out mom or dad bolts to the store to see if there is any hope of retrieving it before the clock runs out and the illusion of Santa is ruined forever. But sometimes the parents who are coming in on Christmas Eve are so completely out of their element that you wonder what their kids actually do all day. Luckily, I enjoy nothing more than giving people the guided tour of "Shiz You Should Buy Your Kid (Because I Secretly Want It, Too)", or else a lot of 3-year-olds would be opening advanced science kits and 12-year-olds would have books meant for someone half their age.

The "meaning of Christmas" certainly has a different ideal from household to household, but I think, at the core of it, we would like to believe that it's about celebrating family and being thankful that you can spend time together. But more often than not, you see parents strung out on this impossible idea of "giving their kids the perfect Christmas" with presents, distracting themselves to the point of shopping on Christmas Eve, when really the perfect Christmas should just be spending time with family at home (and also cake). Nothing is ever going to be "perfect." (Can you imagine how boring life would be if it were?)

Candy can fix almost anything

Science says that people get 60% less angry if you offer them candy. OK, science never said that, but I'm saying it now, and I can't imagine science arguing with me. It is so much more difficult for people to yell at you when you are holding a bowl full of sugar. I mean, they shouldn't have been yelling in the first place, but a girl's gotta do whatever it takes to survive. (And also eat every last lick of the remaining candy when they're finally gone).

More like this
53 Extremely Useful Things People Call Their Most Amazing Finds Of The Year
By Rebecca Martinson
20 Genius Kitchen Storage Solutions For Decluttering Your Space
By Emma Garza
Is The Insta-Famous Always Pan Actually Worth It?
By Jessica Goodman
Poshmark Vs. Depop: How The Reselling Apps Compare
By Emma Carey
Get Even More From Bustle — Sign Up For The Newsletter