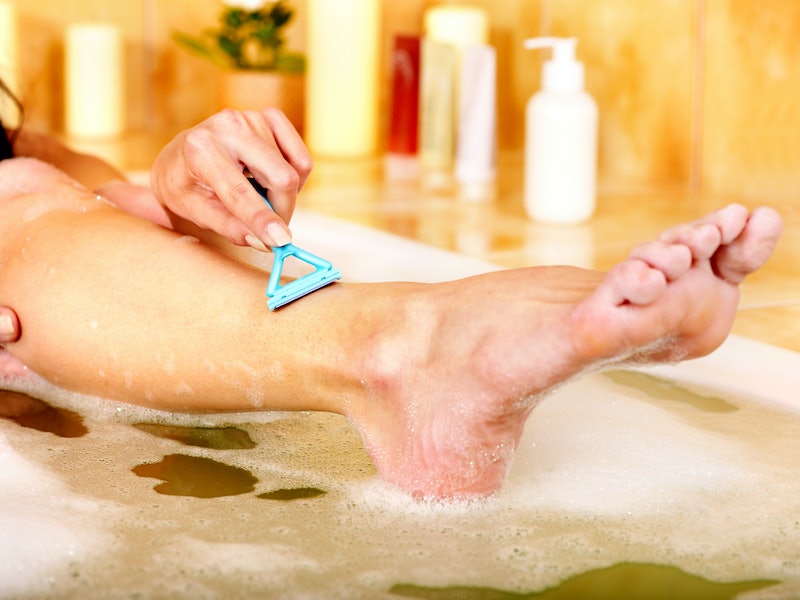 Shaving. Ugh. Amirite? Probably one of the best thing about the colder-weather seasons is that we can go longer without shaving — and therefore longer without common shaving mistakes we make. Especially during No-Shave-November, because girls can totally do it too. But really, is there anything in a beauty routine that takes as long to do that causes the same level of misery? And besides that fact shaving is simply not fun, it's also expensive. I mean, stores even keep those refill blades locked up. It's probably because razor blades are the most expensive thing that retailers carry that the fewest number of people actually want to pay for (but still have to buy). And honestly, having products like that is pretty messed up. Especially since, as women, we pay more for our gender-specified products than men. But I've digressed.

Because shaving sucks and razors are expensive, I'm guilty of some shaving no-no's. I've definitely shaved way faster than I should have, and used a blade way past the time to toss it. But the outcome is almost always the same: bumpy, itchy, irritated legs. And I know I'm not the only one. Shaving properly can not only save your skin from cuts and irritation, but it can also save some money in your bank account.

And since shaving is already annoying enough, there's no point in doing it wrong if you're going to do it at all. Here are the common mistakes people make when shaving, and how to fix them.

1. You're Using an Old Razor

Old razors have dull blades which make it more difficult to get a close shave, and can even cause razor burn. What's even worse is that old blades harbor bacteria. You definitely don't want to be cut by a razor that's covered in germs. Knowing when to switch out your razor depends on how often you use it and how well you clean it. A good rule of thumb is if it ever starts to feel like it's tugging at your skin rather than gliding across it, it's probably time for retirement.

3. You're Not Waiting Long Enough

Shave at the end of your shower so the warm water has more time to soften your follicles, making it easier to shave.

4. You're Not Exfoliating First

Exfoliating helps remove dead skin cells so they don't clog up your razor, which could not only cause a less-close shave but also razor burn.

5. You Shave with Soap

In a pinch, shaving with soap really isn't the worst thing, but if you can help it, don't do it. Regular bath soap is drying. Since shaving also dehydrates and irritates the skin, pairing the two is almost ensuring an irritating time. If you don't want to pay for shaving cream, just use conditioner instead.

6. You Don't Rinse Your Blade Between Strokes

As you shave, your blade is collecting shaving cream, hair, and even dead skin cells. That build-up happens fast, and every stroke you make after the first one is giving you a worse shave and increasing your risk of razor burn. Do yourself a favor and just rinse the damn thing.

7. You Use Too Much Pressure

Using a lot of pressure doesn't actually make your shave any closer. All it does it collect even more dead skin cells in your blades (ew) and cause more friction and therefore irritation than normal. As previously mentioned, your razor should be gliding over your skin, not scraping it. And if it's not gliding, it's time to replace it.

8. You're Not Taking Your Time

If you're crunched for time, just skip shaving instead of trying to squeeze it in. When you're rushing you'll more than likely irritate your skin or get some razor burn. I'm of the opinion that slightly hairy legs are better than itchy, painful legs.

9. You Dry-Shave in a Pinch

We've probably all done this, but it's actually really bad for your skin. Dry-shaving is a sure-fire way to incur razor burn and skin irritation. Always make sure there's at least some lubrication between your skin and razor, even if it's just a splash of water.

10. You Don't Moisturize After

Don't put the lotion in the basket, put it on your legs! Shaving can really dry out your skin and cause irritation. Prevent both of these things from happening by always moisturizing right after shaving, while your legs are still damp from the shower.

More like this
Everything To Know About Daxxify, The Newest FDA-Approved Skin-Jectable
By Olivia Rose Ferreiro
15 Must-Have New Beauty Launches, According To Our Editors
By Rachel Lapidos
This Week’s New Makeup Releases & More Beauty Headlines
By Audrey Noble
13 Caffeine-Infused Eye Creams, Patches, & Serums For Puffy Under Eyes
By Olivia Rose Ferreiro
Get Even More From Bustle — Sign Up For The Newsletter