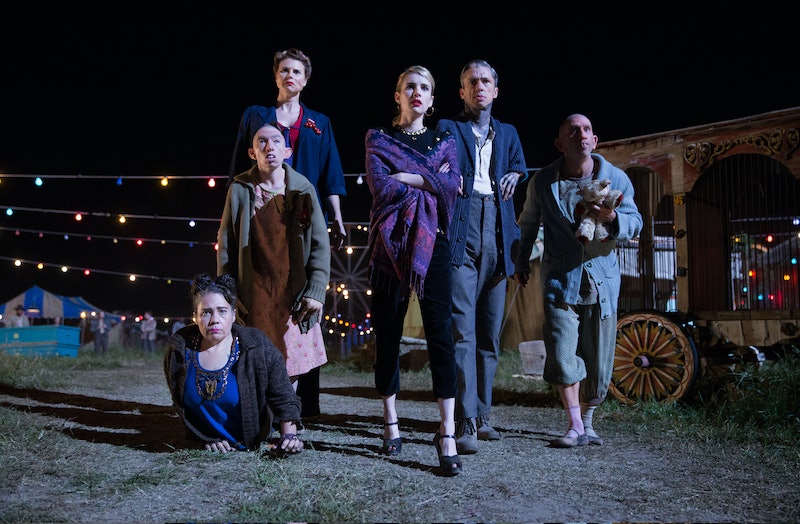 Twisty may be gone, but Neil Patrick Harris is about to creep up American Horror Story: Freak Show significantly. The promo for American Horror Story: Freak Show 's "Magical Thinking" episode shows NPH coming to the freak show as Chester, the new owner. He seems just like your regular ol' charismatic, freak-show-owning magician — but of course, he's hiding something darker. The promo shows that he has a sick obsession with a ventriloquist dummy (as Chester says breathlessly, "I'm sorry. She relaxes me." ... eeee). Plus, it looks like the dummy has a human counterpart that will appear. This is all bringing back horrifying memories of the ventriloquist doll from Goosebumps.

It's not shocking that a new psycho is coming to the freak show, but I wonder if Elsa is going to actually go through with selling the show to Chester. Since in "Orphans" it showed that Elsa really does make it on TV (uh, that may be the most surprising twist of American Horror Story: Freak Show so far), she's probably selling the show to focus on her Hollywood dream. Since she left Pepper to her terrible fate, she may be unintentionally damning the freak show by leaving it in the hands of Chester.

But let's take a look at what else the "Magical Thinking" preview has in store for our favorite characters:

After Dot's failed attempt at seducing Jimmy, it looks like Bette is going to have her own romance with Chester. The preview doesn't show Dot's involvement, but I guess now that the two sisters are supporting each other, Dot is understanding of the situation. It also looks like they will be assisting Chester in his magic act. Unfortunately, all of this involvement with Chester probably won't end well for either woman.

Although Jimmy may have cut off his hands to make money for a lawyer, the preview shows him with his hands intact. So, is it a flashback (since it does look like Stanley is still trying to convince him to sell them) or had Maggie imagined that Jimmy's hands were in the museum? Only time will tell.

In the preview, Desiree says, "Say abracadabra. I can make it all disappear." It appears she is saying this to a pretty stunned/fascinated/horrified Dell. Could it be something to do with Stanley since Dell killed Ma Petite on his orders? It could also be about Dell's sexuality since he has been hiding the fact that he's gay and he may have slept with Stanley. If Desiree kills Stanley (or cuts off his penis, which is what I'm hoping for), Stanley's hold over Dell would certainly disappear.

After a very Dandy-less episode with "Orphans" (I guess AHS was giving us some time to recover after "Tupperware Party Massacre"), we will see our favorite psychopath back. Hoorah! He's still working with police officer that he got to kill Regina and now he looks like he's tracking Chester. A distraught Dandy says, "Do they love him?" which must have to do with the fact that he discovered Bette and Dot are assisting Chester. But since we see that Chester is no angel either, Dandy and Chester could have an ultimate showdown. Is it wrong of me to be rooting for Dandy? (Uh, 'cause I so am.)

Oh, AHS! How you tease us! I guess I'll just have to keep rewatching the preview for "Magical Thinking" since I have to wait until Jan. 7 to see what's really going to happen.