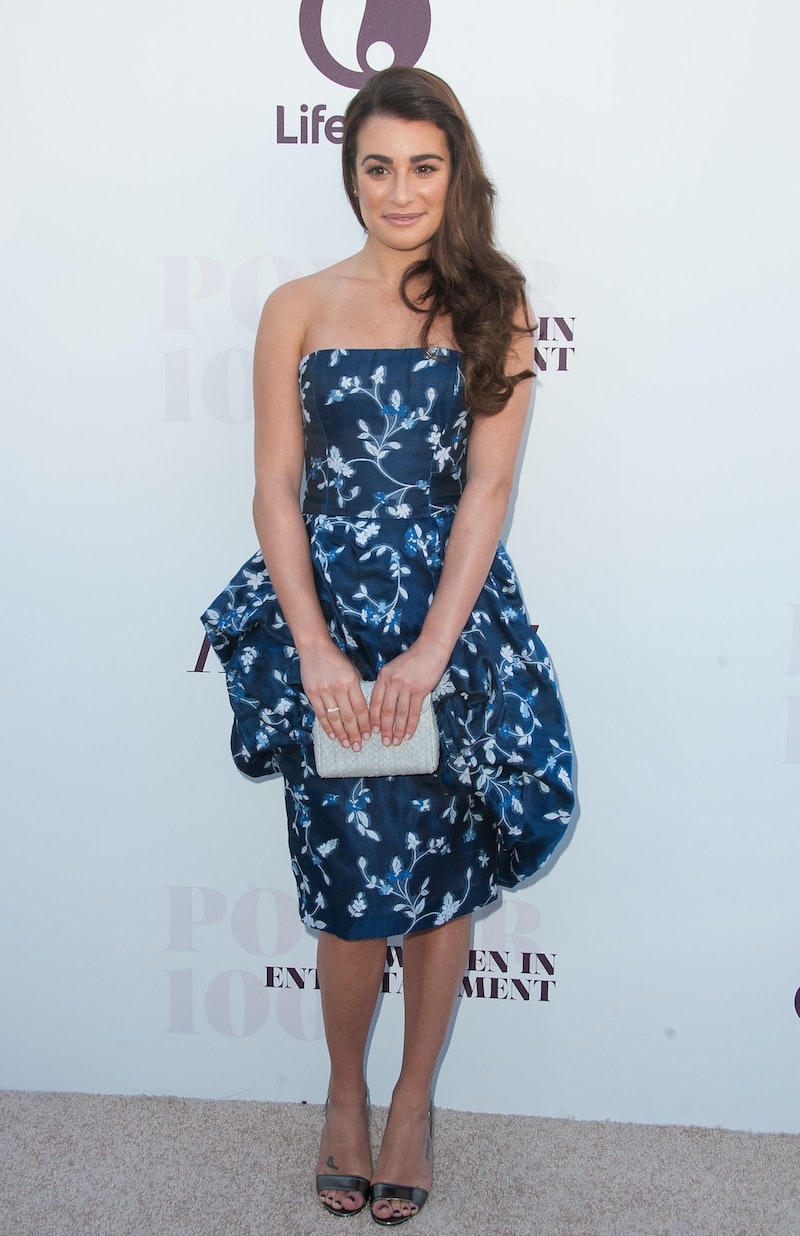 I'm not exactly sure what the moment was. Perhaps we have blogger and model Nadia Aboulhosn's increasing popularity or British fashion model Cara Delevingne to blame (or glorify, depending on how you feel about the whole situation). But at some point — at some unidentifiable moment — 2014 became the year of the strong eyebrow game. (Is anyone tired of hearing that? Because I'm not). From Emmy Rossum to Lily Collins, the celebs rocked the thick arches, saying goodbye to the over-plucking that was the entirety of the 90s. As for the newest honorary member of the brow club? Well, this one's a little more unexpected. Here's welcoming Lea Michele's eyebrows — who made an appearance at The Hollywood Reporter's annual Women in Entertainment breakfast only 10 days ago.

So, why dedicate an entire article to the former Glee protagonist's new, bushy beauties? I know that celebrities aren't the characters that they play. Duh. But I also know that actors get type casted. We associate them with their biggest roles — with the roles that made us love them or hate them. Maybe it's wrong. But we're only human. Most of us know Lea Michele as Rachel Berry, and that means we know her as the prim and proper, cardigan-loving, knitwear aficionado with a big voice and an even bigger sense of self-awareness when it comes to her talent (Blair Waldorf would have been proud). Before Rachel Berry became "the new Rachel Berry," Lea Michele's role, and her many media appearances, suggested a certain normcore-ness to her aesthetic. So seeing her embrace the powerful and defined brow is kind of stupendous.

The thing is, the strong brow kind of goes hand in hand with making a statement. Like most bold trends, it's about wanting to be seen, rather than wanting to fade into the background. It's about being extroverted aesthetically — even when you are introverted spiritually. It may seem silly, but strong eyebrow game is making a comeback for a reason, and I for one am pleased to see women choosing a wild, untamed and (let's face it) far more natural look than they have in the past. Since 2013, hair has started making a comeback, what with the return of the bush and all. And I can't help but wonder whether this is all a sign that we're taking positive steps toward the embracing of the au naturale and stepping away from the painful and rigorous beauty routines we've grown so accustomed to. Gosh. If I hadn't been one of those ruthless over-pluckers in the early 2000s who totally screwed up the hair growth at her brows, I'd be embracing 2014's SEG all the way.

And now, enjoy this photo of Nikki Reed and Lea Michele — their eyebrows definitely steal the spotlight. And I mean in the most fabulous of ways.

More like this
'Stranger Things’ Natalia Dyer Has A Genius Hack For Taming Her Fringe
By Tomi Otekunrin
The $6 Shower Essential That Julianne Hough Loves
By Olivia Rose Ferreiro
The $6 Drugstore Beauty Product Taraji P. Henson Uses Every Single Day
By Danielle Sinay
The Best Beauty Looks From The 2022 BET Awards
By Audrey Noble
Get Even More From Bustle — Sign Up For The Newsletter