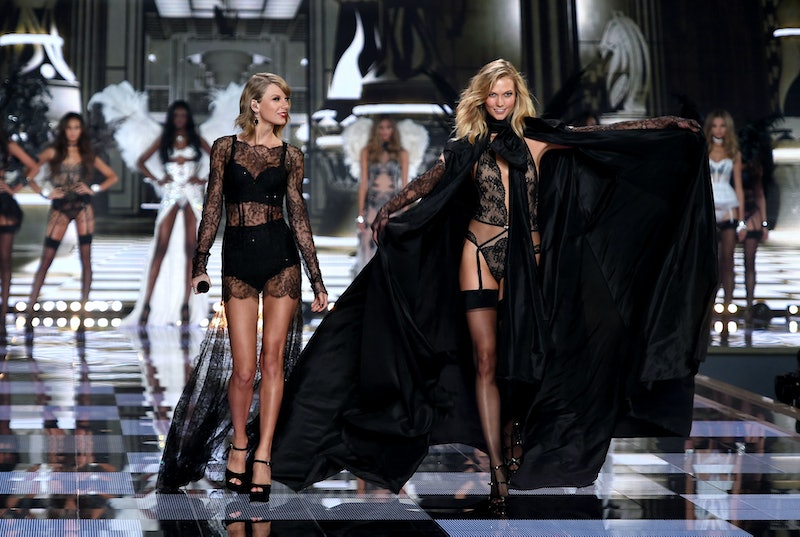 Every year, talented designers, producers, models, performers and stage crews come together in brilliant collaboration to produce the fantastic, glorious, epic, show-stopping spectacle that is the Victoria's Secret Fashion Show. I have to fess up to my utter delight as I watched this year's show (I happen to believe that the 2014 VS Fashion Show has been the best one to date, actually). Watching it sent shivers up my spine, and I gasped, awed, and fawned dreamily over each woman as she walked perfectly down that magical runway. It was like fashion crack, and I was riding my high happily throughout the entire performance.

I don't know about you, but after I've witnessed something so beautiful and brilliant, I want to mutually fan-girl with my besties and share that feel-good fashion high. However, after talking to several of my girlfriends, I was surprised to hear that a lot of them have never actually seen a Victoria's Secret Fashion Show (oh, the humanity!). When I asked them, "Why ever not?!" the answers varied, but were all generally the same female complaints. My fellow plus-size friends felt that since they couldn't fit into anything actually sold at Victoria's Secret, they weren't interested in seeing the fashion show. And my other girlfriends (who are able to shop at Victoria's Secret) thought that the show was more about "perfect models with unachievable bodies that are pranced around for the enjoyment of men."

Granted, Victoria's Secret isn't at all plus-size friendly, and yes, models with fashion industry standard "perfect" bodies strutting around in lingerie has its appeal for the male gaze. But I digress. And I still have to disagree with my friends on this one. There is so much more to these shows — a vision, a story, and talent to be shown off and appreciated... no matter your size and no matter your gender. In fact, I strongly believe that the Victoria's Secret Fashion Show is a complete wet dream for women especially, and here are five reasons why:

Getting Taylor Swift to perform (twice) for the 2014 Victoria's Secret Fashion Show was an absolutely brilliant idea. Her recent album, 1989, has been number one on the Billboard charts for weeks now, and it's no wonder why. This young internet sensation, exceptional pop star, and idol for girls and women everywhere has captured our hearts, as she seems to speak for all of us through her music and art. She's talented, stunning, intelligent and relatable. So having our favorite girl singing on the stage (clad in the most stunning lingerie-inspired gown you can imagine) just adds to the female appeal, as T. Swift never goes out of style.

Much like Taylor Swift, Ariana Grande is a flowering, youthful pop star that we have all sung along to whilst feeling dramatically empowered on the radio (OK, OK. I'll admit it). It was profoundly appropriate for the star to perform during the "Victoria's Secret U(niversity)" segment (tossing that giant ponytail of hers). Her youthful energy, sound and spirit made a bang bang, as they accompanied a delightful display of fun, urban-inspired fashion. She'll show you how to graduate.

I think that a lot of people tend to forget that this is a fashion show. It's not just about the models and the lingerie. For me, they are merely the beautiful living Barbie Dolls that are showing off the main event: The fashion. The lingerie is important, yes — but it acts only as the base for the complete ensemble. Every model is totally adorned with gorgeous costuming, including shoes, leg decorations, flirty skirts, billowing gowns, gorgeous corsets and boleros. The lingerie, while not completely out-shined, is definitely equally accompanied by its costume counterpart for the whole dazzling, desired effect.

Guys love to look at a woman in lingerie, sure — but women love to be that person (and not just for dudes), strutting powerfully, confidently and seductively; totally in charge of our gorgeous goddess selves. Most of us have, at one time or another, daydreamed of being a magical fairy of the forest, a princess of a great castle, or a glamorous Hollywood movie star. There aren't too many outlets for this, really, but Victoria's Secret has it covered. This year, the models went from being golden angels to glamorous old-Hollywood movie stars to effervescent fairies of the woods (a segment actually titled "Fairy Tale"), to grand, royal ladies in vintage-inspired gowns and costumes. Even the runway was lit up in all its magical, colorful glory to reflect the scene and atmosphere of the fantasy element of each segment. The show loudly and clearly communicates that this is a dream come true for us women.

One thing the Victoria's Secret Fashion Show always has is an abundance of wings. And I'm not talking about your run-of-the-mill, elastic-strapped wings usually worn at Halloween. The wings used in the Victoria's Secret Fashion show are fiercely expensive, hand-made by an entire team of professionals, one of a kind, and gloriously, devastatingly epic. These wings are made especially for the eyes of women, I can promise you. They are gilded, jeweled, hand-painted and crafted with every girl's dreams in mind. I mean, who has watched those models sashay down that runway, donning their glorious wings, and not thought, "I wish that were me?" All I have to say is, welcome to the club, girl.