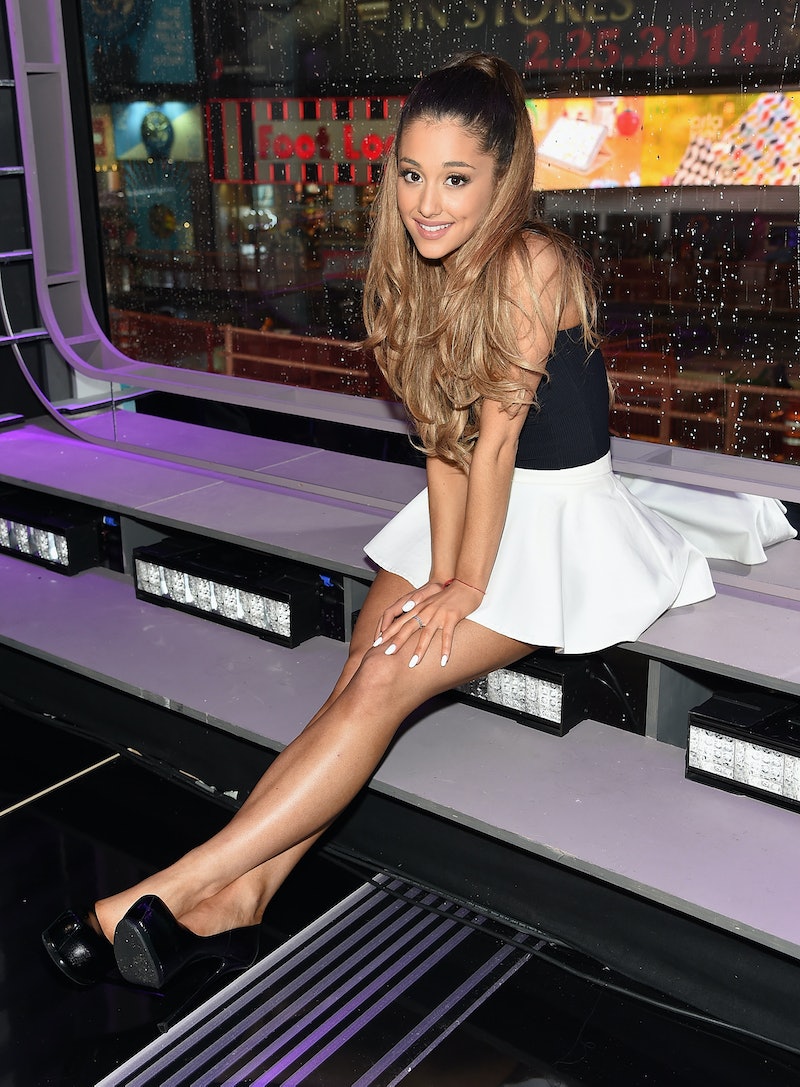 With Ariana Grande's new album My Everything arriving on Aug. 25, the gorgeous mini diva is everywhere in the media. The singer and actress and her thick, lush, ponytailed and perfect hair is even taking over two magazine covers this month — Grande covers both the September issue of Seventeen and Billboard 's new issue. Those are maaaj glossy scores for the massive-voiced Grande, who is just 21 and who has seamlessly stepped into Mariah Carey's Louboutins. Despite being born in the '90s, Grande is playfully paying homage to the mod style of the '60s with her look in both her covers, all the while sidestepping the fact that her former co-star Jennette McCurdy has thrown some serious shade her way over the drama with their now-defunct Sam & Cat Nickelodeon series. Hey, locking in two high-profile covers — and looking amazing doing it — is the best revenge, right?

That said, those paging through both magazines can't expect too much new from the singer's look. Grande, who admitted that her big hair secret is that she wears extensions due to the fact that she damaged her natural strands when she had to dye her hair this not-found-in-nature, Kool-Aid shade of purplish red for Sam & Cat, is known for her ever-present, half-up and half-down pony with loads of volume at the crown. She boasts the kind of thickness that most girls dream about and while she could use some thinning shears to tame and sleekify the tips, her coif is her signature, along with her knee-high, white Rockette-style boots and sky high heels. Even if it was Barbarella's signature look first.

Yes, Grande's most recent style — as seen in Seventeen, Billboard, and her "Break Free" music video (see above) — is a mix of ladylike and '60s-era Jane Fonda. As Grande's career balloons, so does her hair's height, so if these covers are any indication, the singer and actress is still destined for big, big things.

But which mod look is best?

The plaid mini, navy blue thigh-highs, and brown leather boots are such an adorbs early autumn combo, but the matching blue headband highlights the volume and height of Grande's hair on the Seventeen cover. The blowout is sleek and shiny, and Grande's follicles look supremely healthy and touchable; you could run your fingers through these locks. This style isn't too, too much of a divergence from what we expect from the songbird and her young fanbase can totally copy this style. And you'll want to too.

Now, I'd totes expect Lady Gaga to cover a magazine while wearing a helmet-scarf hybrid (or is that a hoodie?!) that matches her dress. Though Grande's Billboard shot still fits within the confines of her signature look, she does somewhat step out of her comfort zone on the industry trade, appearing like a futuristic polka dot astronaut.

NASA did tweet at her this spring, so she is a bit of a space case, in the good way.

The Billboard cover, which finds her rocking mod white eyeliner, allows Grande to embrace a fashion-forward, unusual look, even if the bold print reminds me of her striped video for her smash hit "Problem." On Billboard, she isn't playing it safe... at all. And considering how picture-perfect the star's look typically is, that's incredibly exciting. One secret apparently hiding in that hair? Grande has the ability to surprise us.

So it's no surprise I prefer Grande's Billboard look to her Seventeen cover — and can't wait to see what's next.

You can see more of Grande's cute images from her Seventeen cover and read her quirky quotes about Freddy Krueger and more in her Billboard cover story tease.