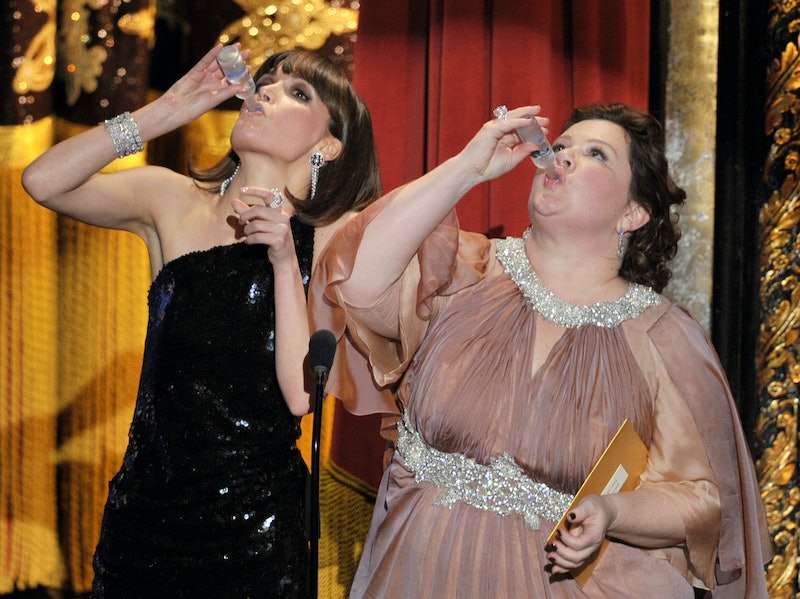 We've figured out how to send human beings into space, how to pilot driverless cars, and how to turn Matthew McConaughey into a respectable, Oscar-winning actor — but we still have yet to completely understand the science of the hangover. Though we humans are several millennia deep into the practice of consuming fermented beverages, saying some stuff we didn't really mean, and then waking up the next day craving Flamin' Hot Cheetos, for a long time the closest thing you could find to a scientist studying hangover prevention was your freshman dorm R.A., who brought you a bacon-egg-and-cheese the morning after you got into the Jaegermeister and told everyone at the Spring Fling that you were a "golden god."

But over the past few years, the adorably named Alcohol Hangover Research Group has begun examining the science of what goes on inside our bodies during a hangover, and, thus, what might cause our hangovers. The folks at the AHRG haven't figured it all quite out yet, but they're dedicated to getting to the bottom of this, and I have decided to join their ranks! By which I mean, I decided to spend most of the week before New Year's Eve getting buzzed every night and trying different products alleged to prevent hangovers, and then recording my results the next day — all so that you could learn how to prevent the dreaded New Year's Day hangover. Because I am the most selfless human being alive. You're welcome!

Look, here's a shot of me hard at work in my lab:

However, if you're planning to get just enough of a buzz on tonight that you can tolerate watching Ryan Seacrest make awkward small talk with the members of Florida Georgia Line, there may be some hope for you yet. Read on, and maybe, just maybe, you'll wake up to your first hangover-free New Year's Day in...however many years its been since you started drinking.

I decided to start with a regimen of my own creation. The closest I have ever gotten to developing a hangover prevention method was "eat a whole box of crackers before you go to sleep." I've done this pretty reliably for the past decade, and I don't know if it actually does anything to prevent a hangover, but I know that no matter what, it's going to happen after I start drinking, so I decided to build it into my plan.

From there, I added in two Advil, because someone had to told me in college that that might help with hangovers, and I had somehow, amazingly, never bothered to actually check in the decade since.

How Drunk Did I Get?: I didn't feel very drunk at the time, but then I came home and decided I had to iron all of my clothes at 1 a.m., so, you know, pretty drunk.

Results: I woke up after about seven hours of sleep feeling just as good, if not better, than I usually do when I wake up. Though the "Advil before bed" thing has been an unsubstantiated hangover hack for years, there is actually a scientific explanation: the AHRG theorized that hangover pain is caused by your body having an inflammatory response to the chemicals in alcohol. Thus taking an anti-inflammatory like Advil would help fight the response.

I don't know if the carbs actually helped, but they sure were fun at the time!

Note: Now, I am aware that combining drinking and Advil is controversial, as the ibuprofen can lead to stomach ulcers for regular heavy drinkers, or those who use Advil and also drink every day. So, let me present all of this with the caveat that I am not a doctor (in fact, I graduated from college by taking a fake-out science course called "Debates in Contemporary Biology"), and thus you should take all my research with a grain of salt. That said, if you drink every day, or have just consumed more than a few drinks, skip this prevention tip. It's not worth the potential health risk. This is a remedy for occasional drinkers recovering from a night of moderate drinking.

Rating: A. This felt like one of those adulthood lessons I was supposed to learn right after college but never did, like how to do my own taxes, or why you can't just throw jury duty notices under your couch and hope that they go away forever. I wanted to sing a song to my Advil bottle the next morning.

Last year, there was a lot of talk about Sprite being a hangover prevention beverage, because the drink helped your body cope with low blood sugar (which causes headaches), and also process certain alcohol by-products that make your hangover feel awful. After a long night of drinking, I am always looking for something to pair with that entire box of crackers at the end of the night, so slamming a Sprite before bed sounded ideal.

How Drunk Did I Get?: I became very outspoken about my pubic hair styling preferences in front of a group of people that I barely knew, and then came home and immediately composed an interpretive dance to Radiohead's "Lucky" before falling asleep with every light in the house on.

Prevention Regimen: A 20 oz. bottle of Sprite before bed, possibly consumed while I was in shower? My notes get a bit fuzzy here.

Results: No. Just...no. I don't know if Sprite may help the day after as a post-hangover supplement, but Sprite did nothing to prevent my hangover. Which makes sense because, while some people think hangovers are caused by low blood sugar, many other scientists now believe that hangovers are actually worsened by high blood sugar levels. The whole next day, I felt like my head was made of lint and my soul was trying to escape my body through my mouth.

You know how every so often, there's a new trendy supplement that's supposed to make hangovers a thing of the past? There was even a Gwyneth Paltrow-endorsed hangover cure called Mercy a few years ago, which I haven't seen in a while, so it must not have been successful in consciously uncoupling us from barfing (thank you ladies and germs, I'll be here all week).

This year, the trendy supplement is "dihydromyricetin," a flavonoid used in some traditional Chinese, Japanese, and Korean medicines to treat fever and infection. But some recent research has put forth the idea that it might be the x factor in successful hangover treatment — UCLA neuroscientist Richard Olsen used the chemical in some casual research and found that he had great results, and a 2012 article published in The Journal of Neuroscience found the chemical helpful for fighting the symptoms of alcohol withdrawal (aka hangovers).

Dihydromyricetin is available in a few over-the-counter formulations in the U.S.; I used a company called Rally Capsules.

What Did I Drink?: Three Bluepoint Toaster Lager beers (5.3% ABV) over the course of four hours.

How Drunk Did I Get?: When I went home, I got a fistful of baby carrots out of the fridge, decided to pick something up off of my kitchen floor, and did not realize that I had also placed the baby carrots directly onto the kitchen floor for at least 30 seconds. I also kept doing those "Tom Cruise in Cocktail"-style high pours with a bottle of seltzer, though I didn't actually spill any seltzer, so maybe that's a point in my favor.

Prevention Regimen: Two Rally Capsules consumed with a glass of water (as directed on the package), plus a new fistful of baby carrots that had not been placed onto the kitchen floor.

Results: I took the capsules as soon as I got home, and honestly started feeling less drunk within a half hour. I was sober enough to have a sensible conversation with my boyfriend an hour later, and an hour and a half later, I was able to get online and pay my credit card bill, which we can all agree is probably the soberest behavior imaginable. In fact, I was so sober that I was able to have a middle-of-the-night panic attack a few hours after falling asleep, which happens to me like twice a month anyway.

Rating: B. I don't think it was the supplement's fault that I woke up and started freaking out over all the poor financial choices that I've made in my life, it was probably just a bad coincidence (or possibly a testament to its power to rapidly return you to your soberest self). But because of that, I couldn't really accurately convey how my body felt the next day, as I was quite tired. But I definitely didn't feel "hungover tired," I can tell you that much.

In my non-scientific advice, which is not medically sound and thus you can't sue me if something goes wrong: head for the Advil. If you're planning on going nuts tonight, nothing can save you and you have my sympathies; but if you're just trying to throw back a few and feel decent enough tomorrow to go work the brunch shift/ deal with your kids/ deal with your parents/ deal with your neighbors, who like to start their New Year's Day festivities with some 9 a.m. tuba serenades, just go for the two Advil.

Now, if you'll excuse me, I am going to spend tonight wearing sweatpants, watching Harry Potter, and never drinking again.