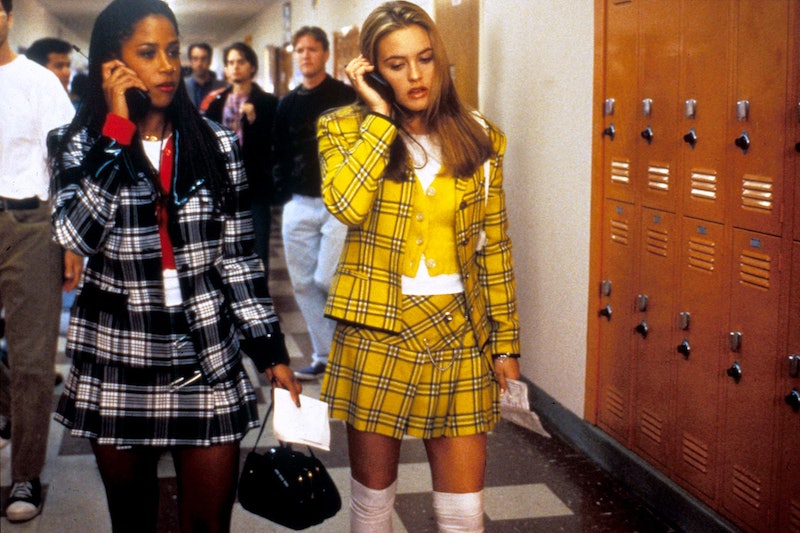 Maybe I was only five years old in 1996, but I still remember it being a pretty epic year. Kindergarten was starting (which signaled the beginning of a very long and anxiety-ridden couple of decades of school). Baz Luhrmann's Romeo and Juliet — a film Rolling Stone would refer to as packed with "rabid flamboyance" — hit the screens (presenting me with my first crush: Leo). And Celine Dion's "Because You Loved Me" was soundtracking just about every TV commercial and Payless Shoe Store on the globe. Oh, and let's not forget Disney brought us Brotherly Love (and those darn Lawrence bros really had it going on). But the most influential pop culture moment in my life was most definitely Clueless. Granted, the movie came out in 1995 — but it was influencing five to 15-year-olds all through 1996. Cher Horowitz summed up just about every fashion trend that would pervade the next 12 months. And 11 years down the line, we're seeing a resurgence of all those knee-high socks and clawed hair clips. Is 2015 fashion going to be just like 1996's, then? Well, maybe not exactly.

Back in '96, there were certain fashion statements going on that most of us can agree need to be discontinued for all of eternity. Think "patriotic pride" tees and ADIDAS track pants (I'm pretty certain we're all disillusioned enough to discard the former and bored enough to leave the latter to the guys on the soccer field). The Spice Girls were also reaching their climax around this time (manifested in a 1997 film debut) so most of us were trying to pull off Baby's pig tails. I don't foresee any of this coming back — nor would I honestly want it to.

As for 2015, exciting things are in the works in the fashion industry that would have seemed utterly nonsensical to our five-year-old selves growing up in the grunge/power suit hybrid decade: think origami silhouettes and Victorian-esque ruffles. But we know trends come in waves. And we know that 90s trends returned in 2014. So it makes sense that 2015 would carry on in similar fashion, expanding on the year that brought us Trainspotting AND Matilda (and those combinations of movies just about showcase everything we'll see in the year to come). So with that, take a look at my trend predictions. We're only a few days away from living in Clueless once more.

Besides my observation on the backpack handbag trend (which has already started to come back — I swear only as of yesterday), I'd say this is what we can expect from our year to come. Keira Knighley has been making loafers cute for years now, but I predict an even larger trend explosion. Along with wooden heels, flannel jammies, suede, maxi skirts and yes, bell bottoms (they have to have their "wave two" at some point — skinny jeans simply do not provide the same ease of movement!).

So I'm not particularly looking forward to the whole cut-out shoulder thing that seems to be in the works, but I am exceedingly pleased about breaking out the knee-highs and pleather again. Maybe 2015 will finally be the year that the princess-loving side of my personality will be able to breed with the folk-music-loving, nerd-chic adoring parts of my identity. And if that's the case, bring on the New Year.

More like this
Most Comfortable Underwear For Big Butts
By Audrey Williams
Social Media’s Favorite Fashion Influencer is Meredith Blake from ‘The Parent Trap’
By Morgan Sullivan
Are Skater Shoes the Next Y2K Trend to be Revived by Gen Z?
By Lauren Alexis Fisher
7 Nail Polish Color Trends That Pros Predict Will Be Huge For Fall 2022
By Olivia Rose Ferreiro
Get Even More From Bustle — Sign Up For The Newsletter