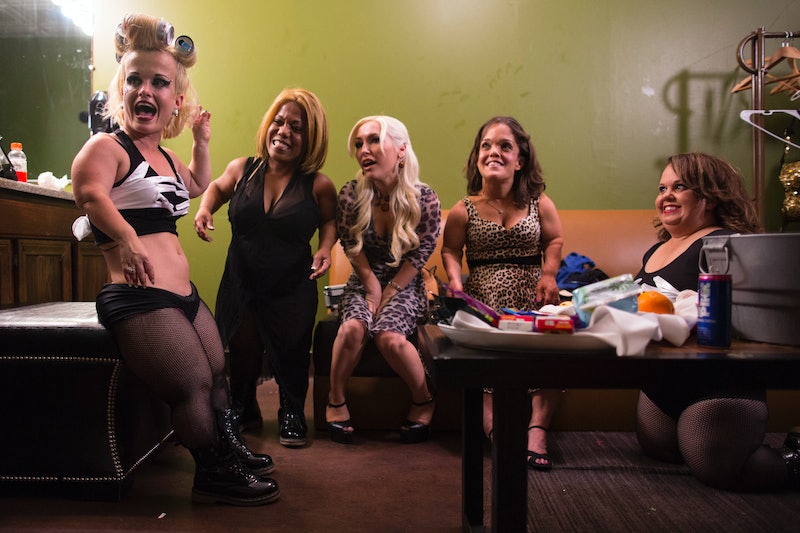 It seems like only yesterday that we bid the cast of Little Women: LA adieu when the Season 1 finale aired on July 22, 2014. Now less than six months later, these little ladies are back whether we're ready or not. And Little Women: LA Season 2 is going to hit the ground running with the promise that one of the cast members is pregnant.

All of this excitement and adrenaline just makes me want to get up out of my seat and do the booty dance. The Little Women: LA fans of the world know what I'm saying. But if you have no clue what I'm talking about, you came to the right place.

A lot went down in Season 1 of Little Women: LA, and in order to properly enjoy Season 2 of this Lifetime reality show, you've got to know its ins and outs so you fully understand all of its nuances and intricacies. While last season brought new friendships, new loves, and new career opportunities into the world of Little Women: LA, we also saw fights, crumbling relationships, and some uncertain futures.

Now aren't you intrigued? Whether you're a Little Women: LA newbie or have watched every episode of the series so far, we could all use a refresher before Season 2 premieres on Jan. 1, 2015. Here's what went down during Season 1.

Christy McGinity was one of the most outspoken and divisive cast members of Season 1 of Little Women: LA. As she made new strides with her boyfriend then fiancé then husband Todd, she strained her relationships with her fellow cast members. Most notably, Christy faced off with Terra Jole on a couple of occasions. Terra claimed Christy, who has been sober for years, had told her she had a sip of alcohol. Christy vehemently denied this, yet Terra, who for some reason really cared about this, wouldn't relent. The two ended the season on good terms, but knowing how Christy acted throughout much of Season 1, it's probably just the calm before the storm.

There Were Bride Wars

Speaking of Christy, she also got into it with Traci Harrison last season. Now the two say they have always had a tumultuous relationship, but the fact that both of them were engaged and in the midst of planning their weddings didn't help anything. Traci thought Christy was constantly trying to steal her spotlight, while Christy just thought Traci needed to get a grip. Ultimately, Traci uninvited Christy from her wedding because she wanted it to be as drama-free as possible. That was probably for the best.

There Was a Lot of Talk About Babies

Starting a family was a major topic of Season 1, so the fact that one of the cast members is now pregnant actually makes a lot of sense. Christy thought she was pregnant when she was late, but it turned out to be a false alarm. Still, Christy was very excited about the prospect of having a child with Todd, but she was also frightened. Todd had lost his daughter with his first wife after she had only been alive for a few hours due to double dominancy, when a child inherits the dwarfism gene from both the mother and the father. Still, it seemed like the couple would eventually move forward with trying to get pregnant at some point.

Elena Gant also expressed interest in trying to get pregnant with her husband Preston. Elena visited the doctor to find out what type of dwarfism she has and also learned that there is a 25 percent chance of her child also being born with dwarfism. She was worried about telling Preston's mother about this, but she was completely fine with the news, as all good mothers-in-law should be.

There Was Ex Drama, of Course

What's a reality show without a little drama from exes, amirite? Well on Little Women: LA, there was a lot of ex drama. Tonya Banks, who had been dating Trevor, a guy she met while speed dating, didn't seem to know whether she was ready to move forward with her love life or continue to pine for her ex, who is also the father of her child. She eventually chose to continue to see where things go with Trevor, but not without ripping Elena a new one for butting into her business. Briana Manson tried desperately to keep it together in front of her daughter while bitterly fighting with her ex-husband about keeping his new girlfriend away from their child until Briana met her. This was one of the most difficult moments of Season 1 to watch.

There Was a Battle of the Blondes

For some reason, whenever two blondes are in a room, pop culture must pit them against one another. Little Women: LA is no exception. Terra looked down upon Elena, a fellow celebrity impersonator, as a cheaper version of herself. However, when it seemed like her boyfriend Joe Gnoffo was flirting with Elena, you could tell that Terra was really upset. There was also a pin-up photo shoot that Terra didn't invite Elena to and then called her up to join at the last minute. However, by the end of the season, any bad blood between the two seemed to dissipate.

With all of this drama happening in just one season of Little Women: LA, who knows what kind of hijinks these ladies will get up to in Season 2? Let's hope a lot.

More like this
It’s Official: 'The Bachelorette' Is No Longer A Fairy Tale
By Samantha Allen
13 Photos Of Formula 1 Racers Charles Leclerc & Carlos Sainz That Will Drive You Crazy
By Radhika Menon
Armie Hammer's Exes Share His Alleged Voice Messages About Cannibalism & Abuse
By Grace Wehniainen
Everything To Know About 'Real Girlfriends In Paris'
By Kadin Burnett
Get Even More From Bustle — Sign Up For The Newsletter