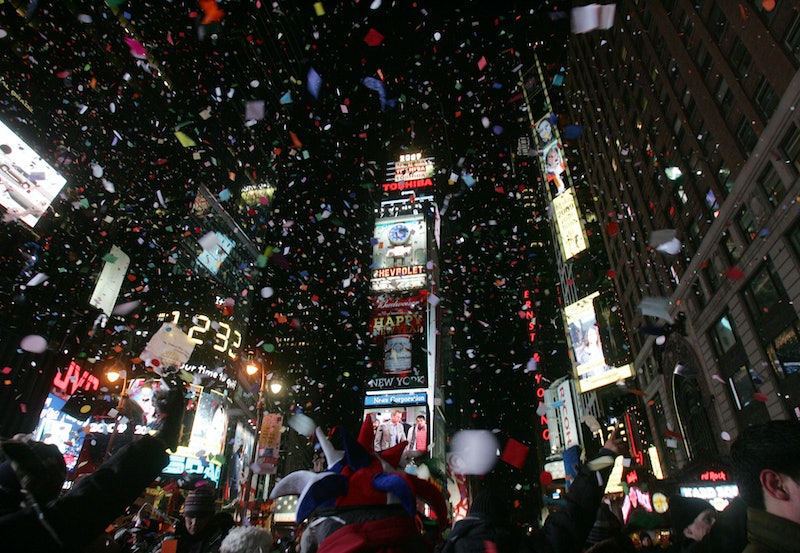 In my 22 years on this earth, I've come to the conclusion that there's only one kind of person who really enjoys New Year's Eve, and that person is intoxicated. To everyone else who is sober for the night, whether by choice or because they're unlucky enough that it's their turn to be designated driver, it's an event full of loud (drunk) people, louder noise, insane traffic, and, worst of all, being forced to watch Ryan Seacrest instead of Dick Clark hosting New Year's Rockin' Eve. The only silver lining there is knowing our girl Taylor Swift is going to perform.As a self-declared hermit, I have a few tried-and-true suggestions for what you can do instead. They're all tested by yours truly, of course, during my years of coming up with increasingly creative ways to get out of social engagements once the excuse "Mom won't let me" started getting me weird looks around age 13. Sure, going out always looks like fun the day after, but carefully filtered Instagrams of the night before don't convey how humid the club was, and how you had to wait 20 minutes to use the gross bathrooms, and the sinking feeling of oh god did that sweaty middle-aged man just grope me? If that's not your cup of tea (or glass of champagne, in this case), here are some of the many, many alternatives to going out for New Year's Eve tonight.

You had to know this one was coming. You have less than 24 hours to watch so many shows before they're taken off Netflix on January 1st. Quick, if you start now you might be able to fit in Gladiator after the fourth viewing of Love Actually!*friends optional

Any card game works, really, but there are just so many hilariously messed-up possibilities with this one. Plus, you get to find out which of your friends is the most twisted, and it's usually not the one you'd expect.

Even if you love Christmas more than Buddy the Elf, which is a lie because nobody could love Christmas as much as him other than me, it's been a week. You have to let go until next year. Play some Christmas music while you're doing it if it makes you feel better.

Just because you're staying in doesn't mean you can't get tipsy. But making your own drink is cheap, creative, and you can make it as strong as you want without the bartender giving you the hairy eyeball. Don't feel down if whatever beverage you concoct has already been done, though. I found that one out the hard way when I got all excited about combining sparkling water and wine, only to have my mother talk about making the same drink in her college years. By now, people have made just about every alcoholic combination under the sun.

5. Come up with ridiculous New Year resolutions you have no plans to commit to

The more outlandish, the better. Always wanted to travel to New Zealand to fulfill your dream of getting to see old Lord of the Rings film sets? Write it down. It's fun to think about, plus some of it might be more achievable than you think.

6. Plan out which gyms you’re going to hit up for free trial memberships this year

Since you're totally going to work out more. Maybe list them by proximity to your home, or likelihood of seeing your not-so-secret local barista crush being there.

7. Troll Tinder with your friends, feeling superior to all the lonely, desperate souls trying to match with you on NYE

Group-trolling Tinder is one of the finest pleasures in life. Well, until...

8. Realize you're one of the lonely desperate souls on Tinder during NYE and immediately stop

Drinking your shame away with the help of that signature drink is understandable, but not recommended.

Sure, that piece on cooking your first Thanksgiving may not be relevant now, but you could be missing out on valuable information.

Take a drink every time someone mentions Taylor Swift or a Kardashian. Just sure you don't emerge at 3 a.m., hours after the ball dropped.

11. Listen to an entire season of a podcast

May I suggest Serial or Guys We F*cked?

Rest easily in the knowledge that while everyone else is paying $150 for a cab ride and starting their new year with a massive hangover, you’re happily in bed with the internet to entertain you.

More like this
Jennifer Lopez Found The Perfect Ben Affleck Throwback Video For Mother’s Day
By Stephanie Topacio Long
Meet The Disney Imagineer Bringing 'Guardians Of The Galaxy' To Epcot
By Charlie Mock
Starbucks’ Chocolate Cream Cold Brew Tastes Like This Retro Candy
By Emma Garza
The Meaning Of Angel Number 555, According To Numerologists
By Kristine Fellizar
Get Even More From Bustle — Sign Up For The Newsletter