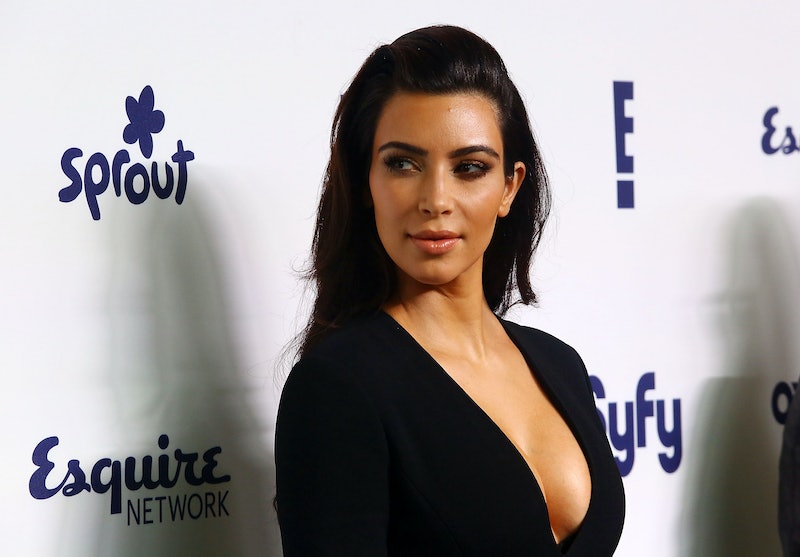 Kim Kardashian on the cover of a magazine isn't exactly big news. She's beautiful and popular and married to one of the biggest music stars on the planet. It only makes sense that'd she'd land a cover here and there. So when Kim Kardashian covered ELLE UK's January issue and people started complaining, it may have surprised some people. But here's the thing — it was the magazine's confidence issue. And, yeah, for the most part Kim K always seem confident, right? But after Kardashian has commented multiple times criticizing her own baby weight gain, people didn't think the cover really fit. However, Elle UK's editor, Lorraine Candy, is defending Kardashian's cover and saying that we should all show Kim K a little respect.

While it makes sense that Kim Kardashian on the cover of a magazine (she is the most famous woman in the world, after all, as Candy said in her blog post), it also makes sense that people wouldn't exactly look at her and think 'confidence.' The baby weight comments, the corset weight-training, the comments about how she "used to be skinny" and therefore discrediting her current, post-baby body... all of that kind of adds up to a picture of a woman who is more comfortable criticizing her body than embracing it, right?

But haven't we all been that woman at one time or another? Haven't we all been tempted to criticize ourself playfully when we're not feeling 100 percent in shape? No, Kardashian's comments didn't set a wonderful example for women, but she's only human. And if you looked at who Kim K is as a whole — her brand, what she stands for, how she dresses, how she lives her life — I don't think what you would take away is "wow, she really doesn't love her body or embrace her curves."

Candy relayed a similar sentiment in her post, saying that although she wasn't shocked at the response to Kim K's confidence cover, she thinks we all should think twice before we judge Kardashian and her level of confidence. She notes Kardashian's ability to grow her brand, transform her career and be wildly successful as reasons why we should think twice before we sneer at the January cover girl.

"Our exclusive survey of 5,000 British people last month showed women are suffering from a huge confidence gap, which is why I commissioned this issue and chose to put Kim on the cover – because I felt that elements of her more accessible brand of confidence could be useful to you. There is something new about Kim: about her career trajectory, her looks, her attitude. Take time after reading the issue to work out how you can break the mould – and create a new one, too"

The above paragraph is how Candy ended her thoughts on the matter, and she summed things up pretty perfectly. Maybe Kim K isn't exactly your style or role model, but there are still lessons we can learn from her success, and why shouldn't we take the opportunity to learn from them if it's offered to us?