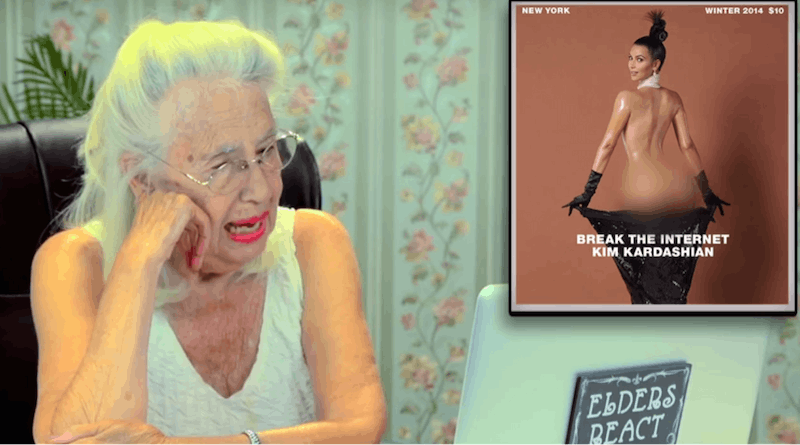 Fine Bros videos of kids and old people reacting to various things are the kind of gift that just keeps on giving. The duo recently they hosted an "Elders React to Kim Kardashian" video, and right off the bat, the elders want you to know that they are wise to her game. The amount of shade from these older folks is almost too much for a single camera lens to handle without freezing over. "She's famous for being famous," one of them says without missing a beat. And props where props are due; Apparently Kim is so famous that even Baby Boomers are well-versed in her sex tape climb to fame, reality television history, and marriage to Kanye West.

But unlike us and our devout worship of Kim's butt (or "tush" as one man endearingly calls it), your grandparents are not swallowing the Kim K Kool-Aid. The eye rolls! The indignant scoffs! The psycho-analyzation of what does and doesn't constitute talent and the hazards of fame! This video is the conversation you most feared having with your elders that you can now watch from the safety of your own home. Because believe me, once the Fine Bros show them the picture of Kim's butt that broke the internet, you'll be glad you weren't sitting across from the guy who quipped, "Lucky me. Probably good I'm sitting down."

But the final verdict?

Kim's butt apparently has inspired all the ROFLCOPTERS this man has left inside of him. Others boggle that it must be photoshopped (huh, who'd have thunk it?) and comment about the "lucky" person who greased her derriere. But ultimately they all did what no human in the presence of those pictures has failed to resist so far: admire the rear that made the world go round.

"We are in the era of the big butt," observes one woman, who couldn't be more right, if 2014's chart-topping "All About That Bass" and "Anaconda" (which also inspired an Elders React video) serve as an indicator.

To see the full and occasionally disturbing commentary from our (SURPRISE!) dirty older relatives, watch the video below: