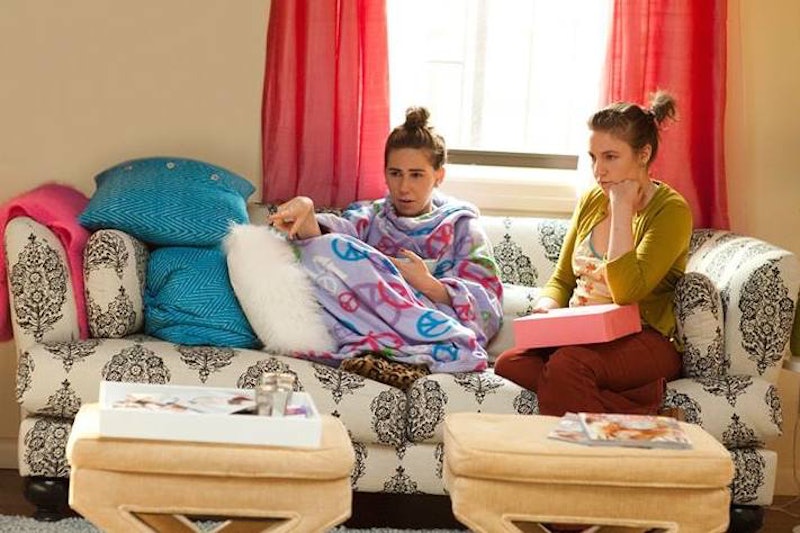 As our hangovers slowly subside and we change from our old pajamas into new pajamas, I want to give a shout out to the TV marathons that have kept us company all day. No, I'm not talking about Friends . I'm talking about HBO's Girlsathon, a marathon of every episode of Girls to prep loyal fans for the January 11th return. It's the perfect treat to pacify those of who relate to the angst of being a 20-something, and hell, I'm sure Hannah would be watching it herself if she could.

Let's face it, the characters of Girls are the epitome of millenials, and it's part of millennial make-up to be able to binge-watch a show in style. That, mixed with a heavy dose of narcissism, guarantees that if Hannah, Marnie and the gang were real, they would be ALL OVER that marathon (and it's accompanying hashtag, #girlsathon). Of course, everyone's binge-watching style is different (Shoshanna thinks she marathons like a Carrie with a Charlotte in the rising), and I believe our ladies are no exception to that.

So if the girls of Girls, still recovering from ringing in 2015, joined in on watching the Girlsathon, here's how I think it would go down.

Hannah doesn't have HBO exactly, thus far she's managed with her parents HBOgo account, her biggest fear being a spontaneous change of password. As she lounges in bed, clad in salamander-print pajamas, she gets incredibly introspective about her personal habits. "Do I eat that much? I can't possibly eat that much," she thinks, chomping on a salted caramel cupcake. She sends a text message to Elijah asking if he wants to bring over some white cheddar popcorn and watch some episodes.

Her platonic snack booty call is thinly veiled, but effective. Within minutes they're giggling in bed together, reminiscing about how Shoshanna got too drunk and called Marnie a two-timing skeletor last night.

Marnie is still sore about Shoshanna getting too drunk and calling her a two-timing skeletor last night, so she decided to ease her emotional wounds with an all-day marathon. She can't afford HBO—she's still trying to make the whole singing career work, and once that takes off she'll see if she has the funds—but she did buy the DVD box sets once upon a time. Back when she had a steady job. Sigh.

Her actual booty call is thinly veiled, but effective, and they're about 2 episodes in before sheets are ruffled and the marathon is long forgotten. Hours later, Marnie is uneasy with her latest dalliance, but justifies that this is for the music.

So Shoshanna's parents could actually afford to cover a cable bill and she has the luxury to watch the #girlsathon is real-time, thank god. Shosh is like, really good at live-tweeting, btw, I think it's something about the rapid pace and succinct use of emojis that makes the act so natural to her.

Clad in her snuggie, Shoshanna's head is still ringing from last night's festivities. The specifics are lost on her, but she vaguely remembers getting too drunk and calling Marnie a two-timing skeletor. Regardless, she's optimistic that she's going to take the year by storm. She tweets an insightful remark about her donut hair ("Omg, so presh") and whispers to herself, "New year, new me."