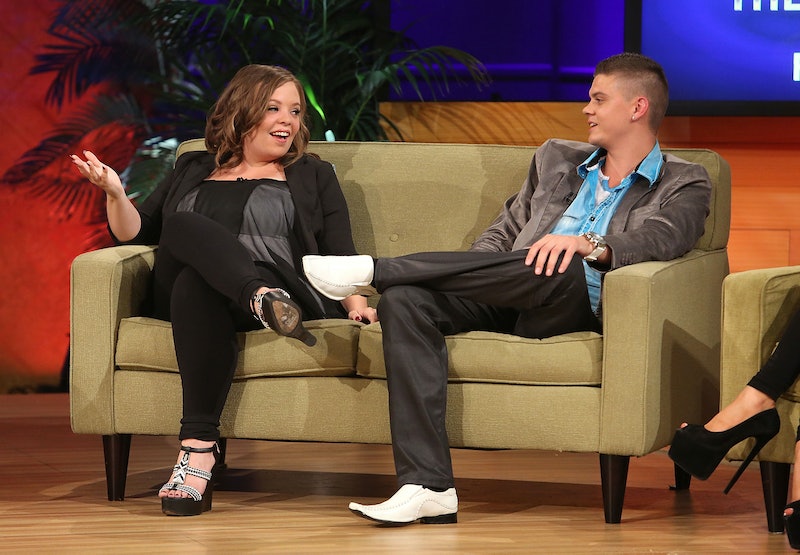 It's been a Happy New Year for MTV fans. If you've been following the cast of Teen Mom on Twitter, you may already be expecting this good news. That's right, Season One's Teen Mom Catelynn Lowell gave birth on Thursday to her second baby girl with Tyler Baltierra! No, they didn't name their newborn "TyLynn" either. The baby girl was born in the afternoon, weighs 6 pounds, 12 ounces, and her name is Nova Reign. Wait — are they planning a crossover with ABC Family? Just joking, that's a lovely name.

We've only officially known that this couple was expecting since August. I guess this time, they couldn't wait to spread the news! This is a significant and potentially difficult moment for the young couple, as Catelynn and Tyler gave their first baby up for adoption between appearances on the reality series 16 and Pregnant and Teen Mom. They have an open adoption and are a regular part of their daughter Carly's life. They have struggled with the emotional consequences of their decision ever since. Teen Mom isn't telling the same story over and over — I appreciate that MTV focused on situations like this one as well. Now, Carly is a big sister! Catelynn and Tyler will return to Teen Mom in Season 5 next yearr, so we're bound to learn more about how the second pregnancy affected them. I just hope the cameras stuck around long enough to capture some adorable playdates with Carly and Nova.

I'm so incredibly happy for these two. They have been through a lot, grown up on television, and despite some bumps and rumors are easily one of the strongest reality television couples out there. Clearly, therapy has done Catelynn and Tyler well, and a happy ending might be in store after all. Look how sweet these two girls are already:

More like this
Ed Sheeran Announced His Second Baby’s Arrival In The Most Ed Sheeran Way
By Rachel Mantock
Kourtney Kardashian Broke Her Engagement Ring & Cried In Her Closet For Hours
By Jake Viswanath
Scott Disick’s First Time Around Kravis Was “Awkward,” To Say The Least
By Jake Viswanath
Kim Kardashian Joked That Her Wedding To Kris Humphries Was A “Gay Wedding”
By Jake Viswanath
Get Even More From Bustle — Sign Up For The Newsletter