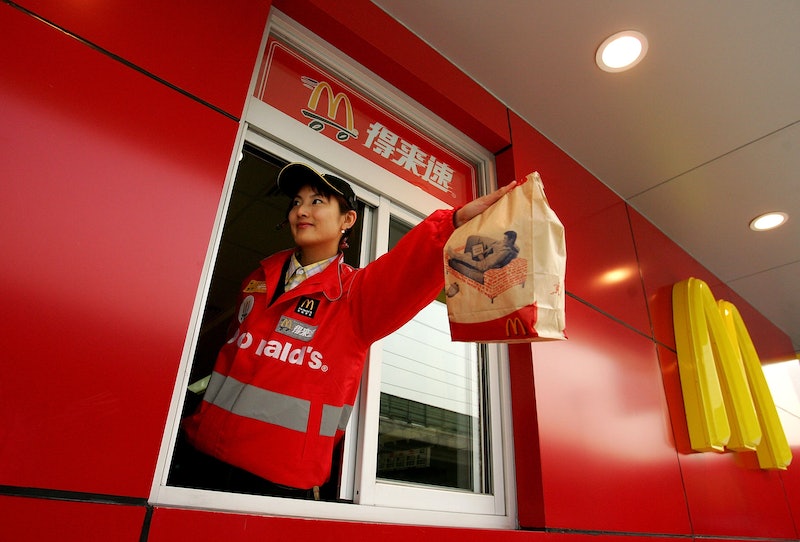 We all know that fast food is bad for you, but lately fast food companies have been trying to convince us that they aren't as bad as they used to be. So is fast food getting healthier? In a word: No. In fact, over the past 17 years, it seems that major fast food chains haven't made any significant gains when it comes to making their products healthier. Oops.

According to a study published in Preventing Chronic Disease that looked at the food from three major fast food chains between 1996 and 2013, fast food isn't getting any better for you, no matter how many "stay active" programs McDonald's tries to start. "A large-sized bundled meal composed of a large cheeseburger, large French fries, and regular cola beverage represented 65% to 80% of a 2,000 calorie diet," the authors of the study write. This same bundled meal would also represent up to 139 percent of a person's daily recommended sodium intake and up to 75 percent of a person's recommended daily trans fat intake.

In other words: Yikes!

There was some good news from the study. The researchers found that portion sizes, although they were increasing up until the early 2000s, have since leveled off, though they remain large. They also found that the trans fat in fries has decreased, probably due to public and legislative pressure against using partially hydrogenated fat. So we can all put that in the victory column.

So while it's great that over the past few years Wendy's has been introducing more salads and McDonald's has made fruit an option for kids' meals, that doesn't really change the fact that the fast food staples — things like burgers, fries, sodas, and chicken sandwiches — haven't changed much at all, at least not at the restaurants this study looked at.

In other words, if you're looking for a reason to stick with your New Year's resolutions about eating healthier and cutting out junk food, don't let yourself fall into the trap of thinking fast food isn't so bad anymore. Fast food is still bad for you. Stay strong. Avoid the cheeseburgers. You can do it.

And they probably wouldn't have been that good anyway.