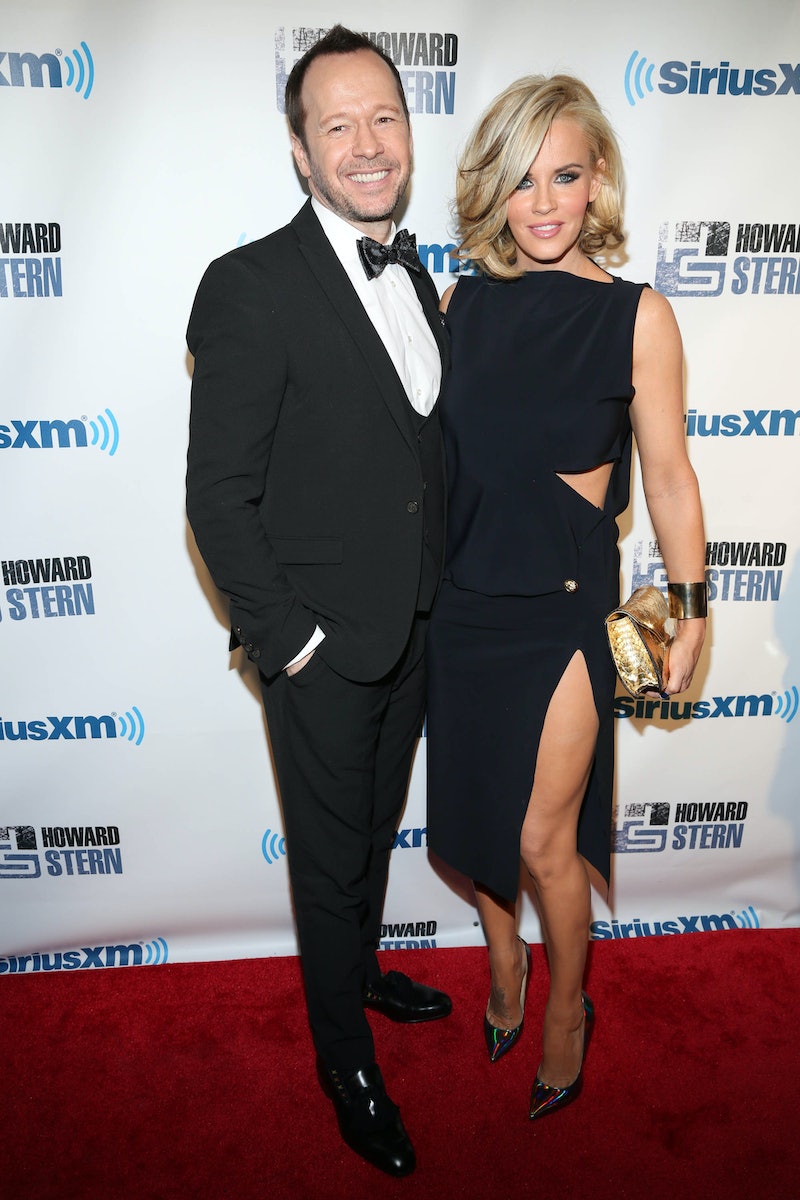 The Wahlbergs are trying to take over our lives one medium at a time — Mark has movies, Paul has food, Donnie has music — but they aren't satisfied until they take over our TVs too. Donnie Loves Jenny premieres on A&E on Jan. 7 at 10:30 p.m. (following Wahlburgers), so how did Jenny McCarthy and Donnie Wahlberg meet? Now that the newly-married couple will be joining the reality game with their own show, they are bound to cover the tale, but we aren't patient over here at Bustle. I need to know now. And their introduction to each other was actually pretty well-documented. So I guess it makes sense that the first few months of their marriage will also be documented for all the world to see on their show.

The love all started on McCarthy's VH1 show The Jenny McCarthy Show in March 2013. Wahlberg was a guest on her talk show and she prompted him to talk dirty to her. She wrote in a blog post on Chicago Splash about the interaction:

Now, I want to talk about what happened between Donnie Wahlberg and me. Let’s just say we visually give "50 Shades of Grey" a run for its money. It gets steamy. I mean like really steamy. Being turned on by a guy is always fun but to have it legitimately happen to you on TV is to be turned back into a 12-year-old. By the time we get into the groundbreaking interview, my face turns fifty shades of RED.

If you were a New Kids On the Block fan back in the day, I totally get it. I think I have officially become a groupie.

But why read about it when you can actually see the interaction go down? Check out the video clip of that part of the episode here:

Now they didn't begin publicly dating until July 2013, but were engaged by April 14, 2014, and married on Aug. 30, 2014. Their courtship may have been quick, but it's obvious that they're crazy in love. (Especially when you consider that McCarthy dated Jim Carrey for five years and never married — take that for what it's worth.) Wahlberg even stated that upon their first meeting they were "instantly smitten with each other" in the below clip from The ET Interview. (McCarthy also called Wahlberg the love of her life.)

Their interaction on The Jenny McCarthy Show kind of set the stage for Donnie Loves Jenny, which promises to be ridiculously silly. Just check out these romance novel covers they recreated! We already knew McCarthy had a sense of humor, but she told Us Weekly that, "I think people are going to be really surprised at how freakin’ hilarious Donnie is ... I mean, when I started dating him, I was like, 'Oh my gosh, he is brilliantly funny!' So I'm glad people will get a chance to see that in him."

And the promo videos for Donnie Loves Jenny show Donnie's hilarity shining through. Just take his bizarre rambling about the two of them becoming trees:

It's easy to be cynical about their relationship — McCarthy is a controversial figure and Wahlberg is embracing a fame comeback. But I'm just going to accept their positive love and hope they keep talking dirty for years to come. (But like, in a not super-creepy way.)