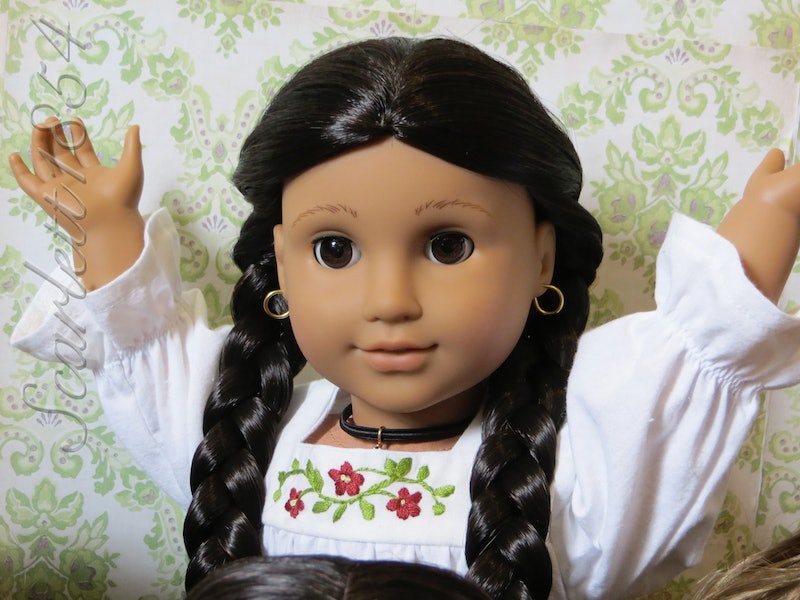 When I was growing up, American Girl Dolls were a big deal. To receive one was a Major Life Moment: I vividly remember receiving my Kirsten doll for Christmas when I was seven. My sisters and I had avidly consumed all of the American Girl Doll books by that point, but the dolls—Samantha, Kirsten, and Molly were available then—seemed like an impossible dream. But there she was that Christmas, nestled in her box: Kirsten in her blue prairie dress, her blond hair—the same color as mine—shiny and gleaming (it would never look that way again; within a week it was a tangled nest).

I had other dolls (mostly Barbies and approximately 200,000 My Little Ponies), but Kirsten was special. My sisters had Samantha and Molly, and the dolls became something of a family enterprise. We took them with us to important events; my mom made matching dresses for our dolls and us; my aunt knitted doll sweaters; my dad made little beds for them. My sisters and I would spend whole afternoons poring over the American Girl Doll catalogue (because the internet DIDN’T EXIST then. I am so old.), drooling over historical doll outfits we couldn’t afford.

Remembering these moments now has me feeling soppy with nostalgia, but I can acknowledge that American Girl Dolls had and still have their flaws, the most significant one being that they are really—for some, prohibitively—expensive. At $115 apiece, the dolls are simply out of many girls’ reach. In 2013, The New York Times profiled a library that had started lending out a Kirsten doll to children. The library was subsequently flooded with offers of doll donations, and a few other libraries have since started to lend out American Girl Dolls to kids as well. The popularity of this practice seems to acknowledge that despite their price tag, American Girl Dolls have something powerful and substantial to offer young girls: characters with personalities, stories, and families in a girl’s toy market that seems saturated with Barbie and PINK EVERYTHING.

I still have Kirsten wrapped up in my parent’s attic, alongside my sisters’ Samantha and Molly dolls. Here are five reasons that they are worth holding onto:

1. “The books were actually good.”

That is a direct quote from my mom. A lot of movies and books for children (including, ahem, those tied to Barbie) are mind-numbingly boring for adults, but kids and their parents can get invested in the American Girl books, which are smart and emotionally resonant. Reading about the challenges faced by people in different historical eras is a great way to generate conversations amongst families. Barbie never had those built-in life lessons.

So much has been written about the potentially harmful effects of Barbie’s unrealistic proportions that I won’t go into it here, but American Girl Dolls are refreshing in that their bodies look like regular girl bodies: flat-chested, flat-footed, with full cheeks and no hourglass figures in sight. There are, of course, good reasons for girls to play with dolls that depict adult women (how else are we supposed to imagine the weird sex things that grown up bodies do?). But it is also important for children to play with dolls that represent themselves. Which leads me to...

3. American Girl Dolls depict how awesome children can be, not adults.

American Girl dolls offer girls role models, not of what they could be in some distant future, but of what they can be right now. Characters like Samantha, Kirsten, Molly, Addy, and Josefina are girls who impact their environments, who actively try to make their worlds better.

In contrast, consider Barbie. I am not a Barbie-hater, but Barbie is essentially aspirational. She presents an idealized fantasy of adulthood, in terms of her exaggerated adult body, but also her many glamorous careers, her “Dream Home,” and her romantic life. While Barbie’s message seems to be “Someday, if you’re lucky, you too might be a pink-clad astronaut with huge breasts and a personality-free boyfriend!”, the American Girl Dolls say, “You, as a little girl, are interesting and valuable. You have the power to create change in your family and your community.”

The books do not try to “protect” children from the less savory aspects of history. In the books, American Girl characters deal with aspects of American history that are uncomfortable for a lot of people, including adults: war, slavery, poverty, racism, animal abuse, and child labor. The books make historical realities feel tangible and personal for children who might otherwise struggle to grasp broad historical movements or abstract groups of people. (This is true for the historical dolls, which now form the “BeForever” line. Regrettably, American Girl’s contemporary dolls seem to be moving away from this model.)

American Girl has faced criticism in the past regarding its portrayal of ethnic minorities and its archiving of some of its dolls of color. Although such criticisms are valid, I think that on the whole—especially when compared to Barbie and other girls’ toys—American Girl dolls offer a lot of diversity. American Girl has released five historical dolls that portray people of color—Addy, Josefina, Kaya, Cécile, and Ivy—and the contemporary line includes myriad combinations of skin, hair, and eye colors (In this line, buyers can also customize their dolls to include hearing aids and wheelchairs, offering children with disabilities representation that is rarely seen amongst other toys).

I think it is especially important that, at least in the case of the historical line, these dolls are distinct, fully fledged characters. Addy is not “African American Barbie”—i.e. simply a black version of a white character. She has her own story, her own clothes and accessories, and her own personality. She is a fully realized, unique character who is valuable in her own right. And I think this is the message of the American Girl Dolls more generally: Girls, regardless of when and where they are born, have agency. They are unique and worthwhile. They matter.