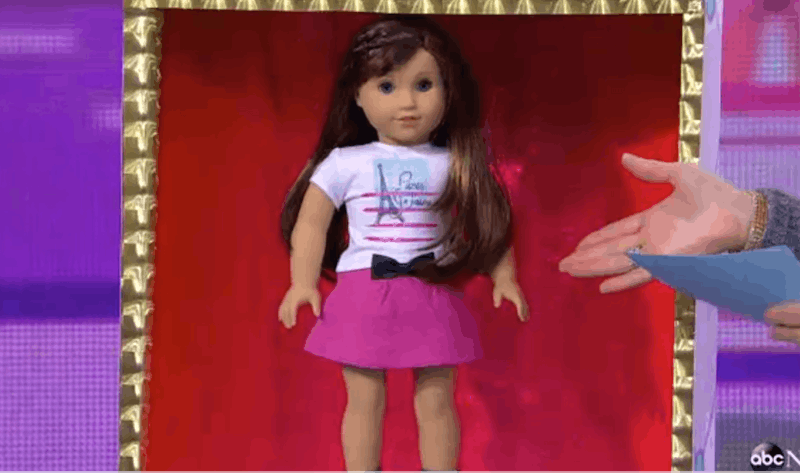 This is it, everyone, the moment you've been waiting for all year (drumroll, please): "Grace Thomas" was announced as the American Girl Doll of 2015 on Good Morning America Wednesday morning, and we'd all better get ready for the frenzy of children and parents wiping out the Internet for her, because she is both a baker and an entrepreneur. Who wouldn't want an incredibly driven best friend who also happens to keep them stocked up on dessert and bread products at all times?

Grace Thomas is described as a 9-year-old girl with brown hair and blue eyes, who was inspired to make her own bakery with her two friends after a trip to Paris, which will be detailed in the book based on her doll. Most of her outfits and accessories are French-inspired to set the tone, and American Girl has even launched a "No Kid Hungry" campaign to kickoff Grace's release in stores on New Year's Day, encouraging young girls to contribute efforts throughout the year to the $50,000 they've already donated to the cause.

Grace replaces 2014's Isabelle, a blonde dancer who has trouble fitting in at her new school. But as empowering as Isabelle's story and other stories from American Girl doll lore have been for young girls, I can't help but question American Girl doll's motives to create these dolls of the year as a "specialty line which produces dolls depicting girls of diverse races and interests as well as physical differences and disabilities". Grace does not seem like a very diverse departure from Isabelle, and neither of them have any notable physical differences or disabilities.

It's no secret that despite the worth of the older dolls, American Girl has been experiencing some major sales drops recently. The company saw marked success back in its heyday with their diverse line of strong girl characters—isn't it about time they focus on representing more experiences in their American Girl Doll of the Year line, too? They have made efforts in the past, but in the last few years, at least, it has seemed like more of the same. The stories themselves have been a little lacking, too. We've seen from other dolls that girls at this age can read and appreciate stories of Addie's enslavement, of Kit making sacrifices in the Great Depression, of Josefina grieving the death of her mother. The stories of the recent American Girl Dolls of the Year seem airy in comparison.

That being said, I am glad that they are emphasizing the strength of this character who is determined to start her own business, because it's still an inspiration that will make an impression on young girls. Here's the sneak preview of the Grace Thomas, hitting shelves tomorrow:

More like this
Starbucks’ Chocolate Cream Cold Brew Tastes Like This Retro Candy
By Emma Garza
When Did Tamagotchi Come Out? In The U.S., 25 Years Ago
By Kaitlyn Wylde
23 Abortion Funds In States With Trigger Bans To Donate To
By Emma Carey
Here’s Your Daily Horoscope For May 17, 2022
By Mecca Woods
Get Even More From Bustle — Sign Up For The Newsletter