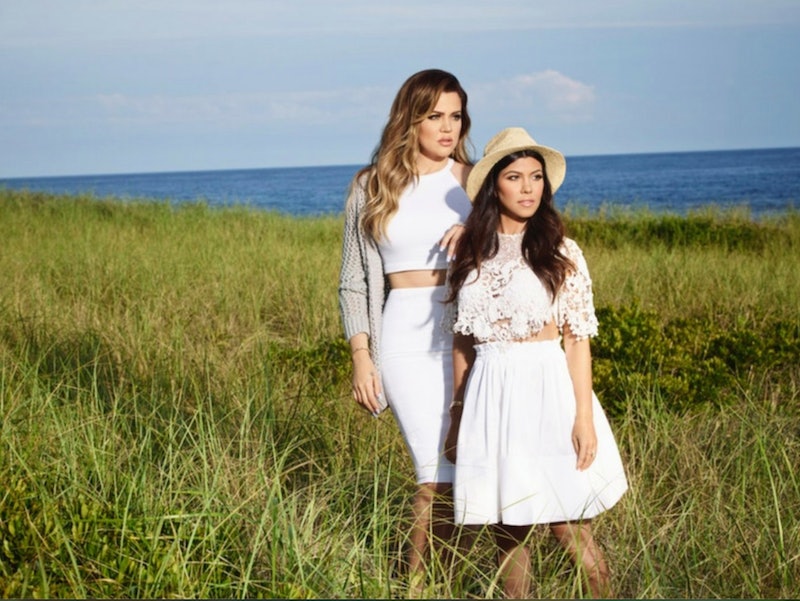 Just like the time of the year the family stayed in the Southampton vacation home, this season of Kourtney and Khloe Take the Hamptons went by in the blink of a false eyelash’d eye. Yes, we've already reached the final episode. But hey! Keeping Up With the Kardashians will return to E! before you can bat that aforementioned false eyelash’d eye. Sunday night’s finale of the KUWTK spinoff ended with a fireside recap of the season, but before we could cozy up with some s'mores, there was a Kardashian Konflict to be solved. It was not the first recorded Kardashian Konflict, and it surely will not be the last (did you see that KUWTK Season 10 promo? THE DRAAAAMAAAAAA).

A day or two before the Konflict (or it could've been a week before. A month before. Hard to say), Kourtney told Kim she'd deliberately cleared out the Hamptons house alcohol stash to support Scott's sobriety. A morning or two later (once again, don't hold me to that timeline), Kourtney wandered down to the kitchen only to find a bunch of bottles of sauce-a-hol strewn about. 'Twas the previous night's liquor-fueled gathering! The culprits: Khloe, Kim, and Not-leak Cheban. Scott was there for the gathering, but he was only an innocent bystander.

Khloe yelled at Kourtney for yelling at Khloe and Kim about the bottles of alcohol. Khloe and Kim laughed. Kourtney was furious that the newly-sober Scott ended up taking care of her blotto sisters. Khloe volleyed back with a "how many times have I had to take care of your sloppy man?" retort. Kourtney called her sisters bad influences. Khloe threatened to leave the Hamptons right then and there (I think this was the day before everyone was supposed to leave anyway, but I can't say for certain. Time is a flat circle). Khloe yelled. Kourtney yelled. Kim sipped her coffee silently. (Don’t worry, don't worry. Everyone made up by episode’s end. Everything's fine. S'mores, remember?)

I gotta admit, when Kourtney first walked through the living room and kitchen and that look of disgust krept across her face, I assumed she was just annoyed at the mess her family left behind. I temporarily forgot about the Hamptons house booze embargo. I was like, “FEEL YOU, KOURT. I also hate a mess. I too would be a-huffin' and a-puffin'. RAKE 'EM OVER THE KOALS."

Alas, it wasn't just the mess. It was what the mess meant. Or what it could've meant. Or something like that.

So, who was the finale MVP? Ehhhhh, it's a tossup between Malika drunkenly picking a quasi-fight with Not-leak Cheban and Mason being Mason

Who am I kidding? The episode belongs to Mason.

I mean, come on. That shark pajama set was A+.

Anyway, thx 4 the memoriez, Kourtney and Khloe Take the Hamptons. It's been a tumultuous season, no doubt, but I'll cherish you in my heart always.