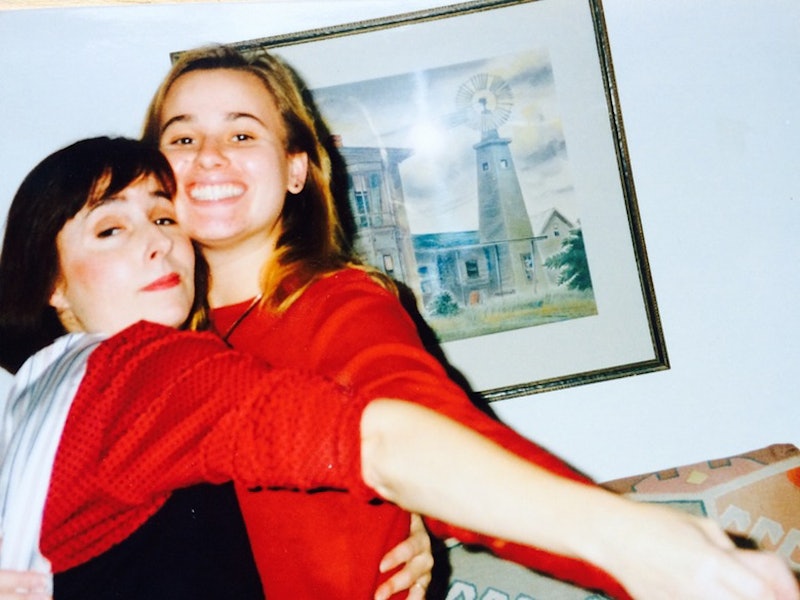 Open any drawer, cupboard, or closet in my mother’s house and out tumble myriad glistening tubes of lipgloss. Circular palettes of eye shadows with their cracked and shimmering innards look like the shock of crystal inside a geode. There were years when my mother's makeup required an entire room of its own, though there was always some evidence of it elsewhere; in glittering cracks of linoleum, dusting the edges of shelves and winking off the hems of dresses, like fissures to a parallel universe in which my parents had no dangerous secrets, no deadly addictions. I mistrusted these paints and potions, for they could not disguise our problems.

My mother’s mascaras and eye pencils soon grew copious enough to warrant their own territory and fill entire drawers. Their cases, shiny and semi-phallic, conjured images of weapons and objects of sexual pleasure all in one.

As a teen, I was drawn with curiosity to this realm of beauty. But my body, decades ahead of my emotions, resisted its lure: eye shadow stiffened my lids, stinging my sensitive eyes, leaving smudges and tears. I could taste the petrochemical composition of lipstick in everything I ate, and a creamy foundation meant to smooth out a blotchy complexion smothered my tender pores under its mass.

Unlike many addicts, however, each morning she rose again, pale and sluggish, until she’d showered and spent an hour before her mirrors, weaving the spell of the wands and pencils, with all their transformative power.

In the end, I resisted my mother’s powders and unguents because there was so little else for me to rebel from. Do drugs? She did them all. Have sex as a young teen? She beat me to that one. All I could do was to define myself by being Not Her. Not glamorous, not pretty, not sensual or sexy.

Makeup did nothing to refresh the inside of me, either; a place of roiling, constant anxiety that led to frequent stomachaches and a nervous crack in my voice. A latch-key kid who bounced between my divorced parents’ homes week to week, I did not believe in making over any surface, not even my own face.

But makeup worked magic on my mother who, always in heels, held court behind the Clinique counter at Macy’s, and later as an executive manager for Benefit Cosmetics. She ended each day with hollow eyes, slumping onto her bed in a theatrical expulsion of air, from where I would be lucky to get her to budge long enough to make me dinner.

Her fatigue was not merely the result of long days at work, but of alcohol and opiates, tossed back in an effort to cope. Unlike many addicts, however, each morning she rose again, pale and sluggish, until she’d showered and spent an hour before her mirrors, weaving the spell of the wands and pencils, with all their transformative power.

At age 26, I found myself working as Spa Director for a swanky Marin County gym where the aestheticians were notoriously flaky and high-maintenance. My frustrated boss made me a deal: he'd pay for me to be trained as a beautician if I'd commit to sticking around for several years. The offer came with a raise, and I couldn't think of a reason not to do it.

In beauty school, I found myself learning to give facials and apply fake eyelashes, a painful gauntlet that made clear the adage, “Beauty comes through suffering.” Laid bare for waxing practice, the other girls clucking at the thickness of the hair that trailed down my thigh, I gritted my teeth and tried to think about all the great tips I’d make after earning my license. Stuck together under fluorescent lights every day in our school whites, girls formed fierce cliques and snapped out insults. I began to feel incarcerated.

She sat up and shrieked at her reflection in the mirror. "Oh my god. I can't f*cking believe this."

My beauty school instructor, a stern Russian woman named Malvina, regularly walked by my subjects, clucking pitifully at my handiwork. Once, she added in a tone both stern and amused, “She looks wonderful … for prostitute.” She knew right away that I was hopeless, often sweeping by to add a touch of taupe or a layer of peach to amend my errors, and clucking her wonder that this was my mother’s realm of talent.

I only made it a couple of years as an aesthetician before I felt worn down by the endless bikini waxes and eyebrow shapings. One day, distracted by thoughts of the novel I was beginning to write, and bored by my client's detailed explanation about the million-dollar house remodel that was causing her so much stress, I realized I'd waxed her eyebrows unevenly. And badly — as though a cat had scratched right through one of them, leaving them too thin. It happened so fast there was no turning back, no quick fix or suggestion that I'd decided to "thin her out".

"Oh no," I said, my palms instantly sweaty.

She sat up and shrieked at her reflection in the mirror. "Oh my god. I can't f*cking believe this."

In that moment, I knew I was done as an aesthetician; not because the word of my bad service would spread, but because I genuinely couldn't work up any emotion other than relief that she was leaving my office.

And yet, 15 years after quitting that job, in this last year where death has made unwanted visits in my own life — the child of friends to a cancerous tumor, my godmother to a lifetime of health problems, a 45 year-old friend taken suddenly by aneurysm — I've found myself more often at the mirror, painting over the frowning edges of my face.

After a lifetime of resisting makeup's glimmer and gloss, why have I now scrabbled through crammed old bags of the stuff my mother has been giving me for years? My sudden decision was partly driven by that vanity I once eschewed in my clients, which I finally understand.

Now, standing beside my beautiful 23-year-old sister, I am keenly aware of sun spots on my formerly fresh skin, of the new wrinkles and dark circles tattooed below my eyes that sleep doesn’t seem to cure. After a difficult few months of grief and stress, I’ve finally come to relate to the lure of makeup as a form of masking one's vulnerability.

It's not that I believe you can gloss over pain with a mascara wand, but I now take a primal comfort in the symmetry of application, the kind my mother has known for decades. After all, sadness has a way of writing itself in plain text in the hollows of my cheeks and the pits of my eyes; which leads to painful questions, well-meaning or not, that I'm not always ready to answer.

Sometimes, just a daub of cover up gives me the freedom to decide exactly how much I'm willing to show.