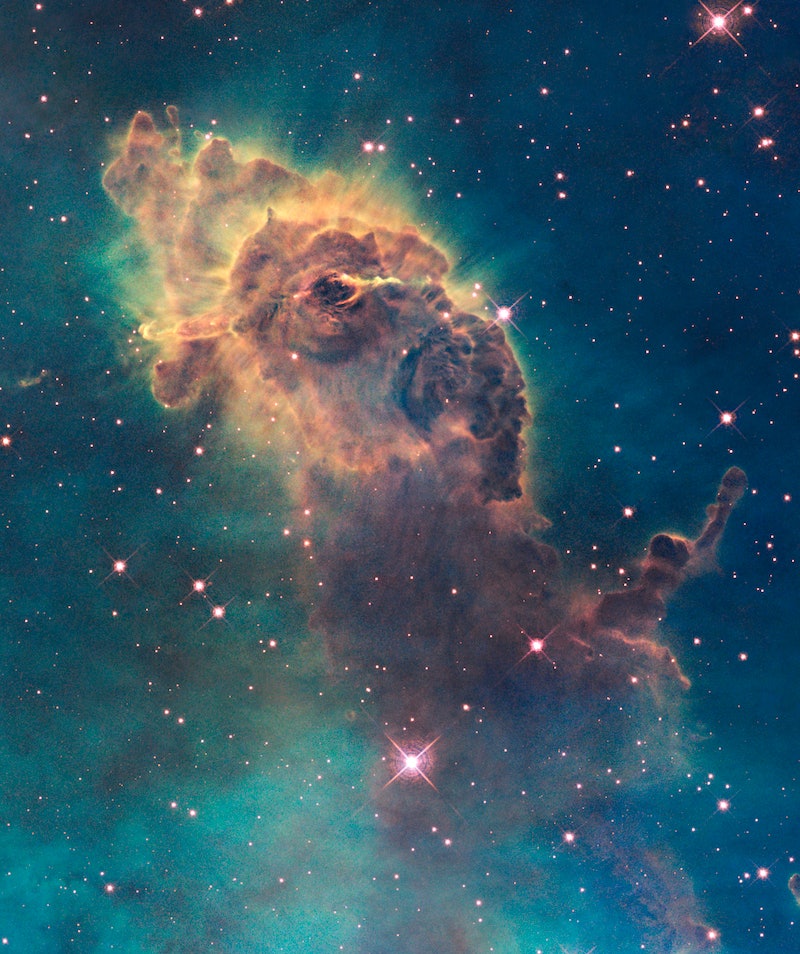 Whether you're a practicing neo-pagan or a die-hard skeptic, astrology can be an intoxicating draw. It's hard to resist a prediction of what's to come — especially if it's about your sex and love life — because hey, even if you disagree, free will still exists, right? That said, two wise women have put together Darkstar Astrology's horoscopes for 2015 and Tarot.com's 2015 predictions, which include some astrally-divined romantic developments for all of us. What you do with this information is up to you, but as a Capricorn, I am really looking forward to the forecasted "no more drama" that is coming my way this year.

2015 also happens to be the Year of the Goat in the Chinese zodiac, which is supposed to bring an end to chaos and disorder in the world at large. That’s not saying Murphy’s Law will suddenly prove false, but with any luck (and it’s all luck, to some) this year will be filled with a little bit less senseless killing, virulent racism and sexism, political corruption, and environmental destruction. If you also happen to meet someone awesome to date, make a serious commitment to someone you love, or have a ton of killer sex, that won’t be so bad either. Now, on to the horoscopes! (And some sweet pictures of outer space to set the celestial mood.)

2015 is said to hold many moments of heightened communication and networking for Aquarius. Take the time to interact with the diverse selection of people who enter your life and you won't regret it. Whether these contacts become friends, lovers, or long-term relationships is up to you.

Great romance and great sex is on the horizon for Aries this year. Jupiter will be in your House of Pleasure until August so make the most of it! If you've been in a sex or love rut consider that over, because change is afoot. Prepare to have your love life shaken up or transformed completely.

This year is all about healing. If you had a bad breakup last year, 2015 will mend your wounds. That said, you should work on how you feel about your ability to find a partner. The more you believe you are worthy of love, the more you will attract it to yourself. While you are taking care of your mind, however, don't neglect your body, either, because your physical and mental health are equally important for your love life.

2015 will bring new beginnings and put a stop to that streak of bad luck that plagued you in years past. In the words of Mary J. Blige: no more drama. Push through your personal roadblocks, whether they be about dating, marriage, sexual exploration, or other facets of your life, and you will be rewarded.

2015 is about facing your fears. Maybe you need to finally let go of that toxic relationship or maybe you need to make that commitment you've been too afraid to go through with. Saturn enters your 7th House in the beginning of the year, which is a perfect time to pair up, especially if you've been single for a while. If there are no prospects you're excited about, turn your focus inward and work on commitments to yourself.

This year will bring you material abundance. Since you'll probably have an increase in disposable income, you can use it to treat yourself and the ones you love. While you're at it, you can get yourself some burlesque-worthy lingerie, take yourself on vacation, try a new hobby, and revel in your successes.

While 2015 might shake the foundations of your relationships, it doesn't necessarily signal the end. The coming months may be tumultuous, but the unknown can be kind of mysterious and sexy, right? Hold your ground and you might find that those lemons have been made into the perfect vodka lemonade.

Jupiter enters your House of Partnership to bring romance your way this year. There are so many possibilities for connection that if one doesn't work out there will be another around the bend. Choose wisely, because relationship potential isn't necessarily relationship material.

2015 is the year you get it together, centaurs. Your personal achievements are through the roof, but it's not all hard work. Expect a little action on the side when an old flame to pops up in the winter months to keep you warm. If you're already coupled up, perhaps that "old flame" is a position that you haven't tried in a while?

Your career will hit new heights this year, so it's an excellent time to work on that love-work life balance thing. Actually, it probably won't be too difficult to combine the two, since you'll be on such a high from your day time successes that you'll be sure to have some night time successes as well. Your dedication is finally paying off, so enjoy it.

2015 is the year you get by with a little help from your friends. Whether that means you'll be set up with someone amazing by your BFF or you just reconnect with your favorite ladies (or dudes), it's going to be a good time for good hangs. Don't forget the old adage, chicks before...well, you know.

It's your year to get a little naughty (like you really need an excuse). Taboo-busting behavior has never been more pleasurable than it will be within the percolating cycles of Uranus and Pluto. Whatever that means to you, go with it. You won't be sorry.