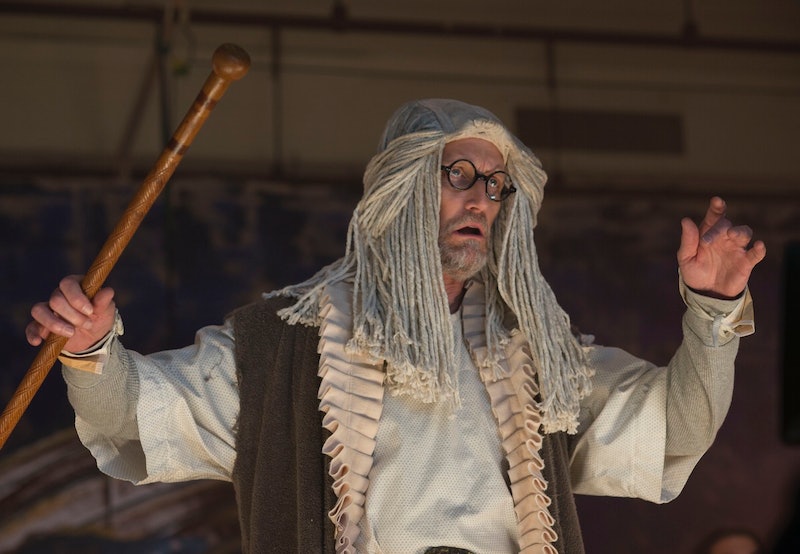 Gotham is back — boy, is it back. After what I considered a pretty lackluster winter finale, Gotham more than made up for it Monday night when it returned for the second half of Season 1. It seems like the show is no longer doing one-episode one-offs as far as their villains are concerned because the main villain of the episode, Jack Gruber, escaped before Jim Gordon and Harvey Bullock could capture him. Even worse, he managed to perfect his technique before he left, so there's a psychopath loose in the city who can use electrical volts to turn people into docile, obedient puppets. Suffice it to say, Jim is going to have his hands full.

So, who is Jack Gruber? As it turns out, the electrical genius isn't as unfamiliar to DC comics fans as we originally thought. According to the promo for the next episode, Gruber has taken on the title of the Eletrocutioner for his reign of terror in Gotham City. The Electrocutioner is a minor villain in the DC comics universe, a title that has been carried by at least three different characters — none of which were named Jack Gruber. However Gruber's power seems to be far more insidious and dangerous than that of Electrocutioners past. All they could do was kill people with electrical volts. Gruber can control them.

Yeah, I'm kind of (incredibly) worried for Jim at this moment. What is the new Electrocutioner planning? It seems that his ultimate goal was to figure out the right voltage of electricity to jolt people with that would make them susceptible to his commands, something he has only succeeded in doing twice: once with Nurse Dorothy Duncan (may she rest in peace) and again at the end of "Rogue's Gallery." With that kind of power, the Eletrocutioner can take control of the entire city — provided he gets enough electrical energy for that many people. I'm no electrical genius, but I don't think just blasting a bunch of people with a large enough bolt is enough to mind control them rather than kill them — but much of Gotham runs on rule of cool.

Alternatively, it could be possible that Gruber is only after revenge. After all, Gotham cast him aside in Arkham Asylum like a discarded napkin, so why wouldn't he want to make all the people responsible for that suffer? Gruber is well-spoken and an actor — which means he's unnecessarily dramatic and has the intelligence required for elaborate revenge plots. The only thing for sure at this point is that Gotham is in some serious trouble, and it looks like Jim might be coming off his banishment to Arkham a lot sooner than we expected as a result. But then, did we really expect him to stick around there for long?