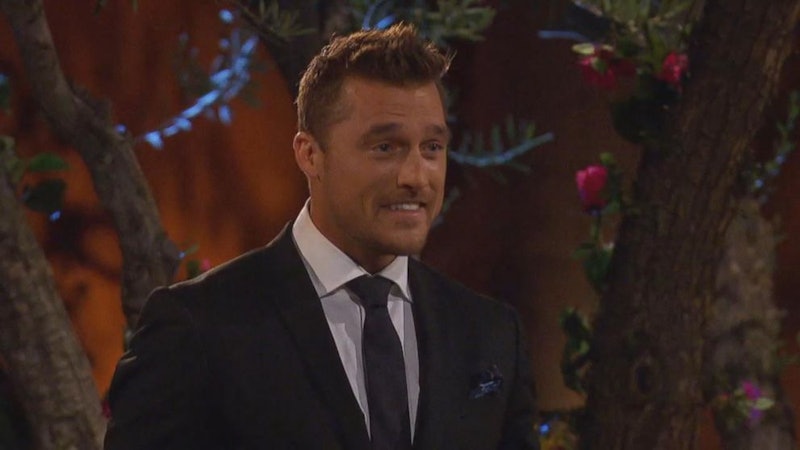 It's a good thing Chris Soules is a farmer because he'd be pretty terrible at any job that required any kind of secrecy (read: CIA agent, reality show production crew, magazine cover photographer, etc.) The Bachelor stopped by Jimmy Kimmel Live! on Monday and accidentally revealed some season spoilers. Usually the show's leading man or lady stays pretty mum on their journey to find their soulmate. (Or in his case, Soulesmate.) After all, if he gives away the answer what's the point in watching?

But while Chris didn't exactly reveal who he goes home with, he did drop some information about this season's women. Jimmy Kimmel held up a stack of cards with the contestants on them and asked Chris to play "Crazy or Not Crazy?" And guess what Chris said when they got to Ashley S.? "Crazy." He dropped the truth bomb instantly so I guess maybe her ramblings about onions wasn't just an act? (Oh, Ashley. We were rooting for you.)

As for some of the other contestants, you might not want to put all your faith in first impression rose winner Britt. When Kimmel asked Chris which Hollywood restaurant she waited tables at, Chris replied, "I don't know, we never got that far." Um, spoiler alert much? Kimmel joked that he'd figure out the whole ending to the show in about three minutes if Chris continued at the rate he was going.

Amongst his other spilled secrets were that his parents "weren't real excited about the drunk one" A.K.A. Tara, so I guess we can assume they don't end up together either. How about Kaitlyn the lady who said "you can plow my field" to Chris? Surprisingly he had nothing bad to say about her or her sense of humor. "She was great," he replied without a trace of sarcasm. Although the past tense "was" probably gives away her fate too.

It's pretty likely that Chris doesn't end up with any of the women Kimmel asked him about. I don't think he was lying about any of the women to throw us off. After all, he's a farmer, not an actor. Remember, this is the man who revealed weeks before his season started that his journey ends with him being in love. He's just a master secret spiller which is bad for ABC, but I'm betting whoever he picks in the end will appreciate his loose lips and honest behavior. So he's got at least one person on his side, and if she's his Soulesmate that's all that matters.