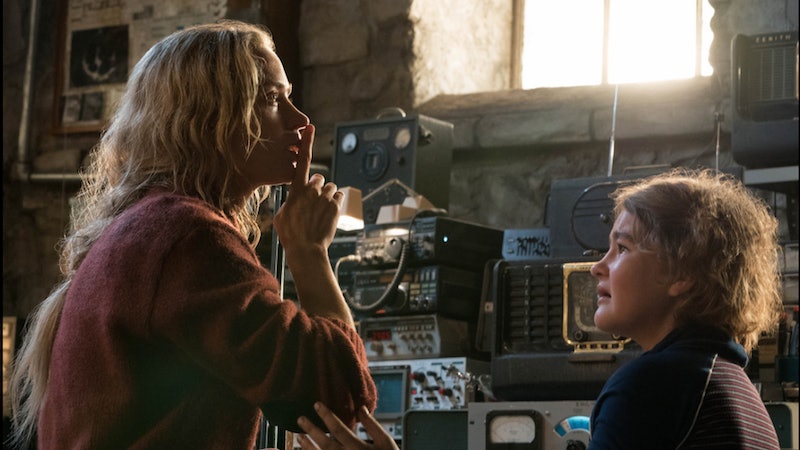 A little over a year since A Quiet Place terrified audiences everywhere as the sleeper hit of 2018, filming has officially wrapped on the sequel — and it promises to be creepier than ever. In fact, John Krasinski's A Quiet Place 2 wrap photo is filled with mysterious clues about what fans can expect from the horror sequel, as well as keeping them on their toes about the next installment of the story.

On Wednesday, Sep. 25, the Office alum shared a photo of himself and wife Emily Blunt — who won a Screen Actors Guild Award for her performance in A Quiet Place back in January — holding hands and walking across a bridge, half-hidden in shadows. "Well... that’s a wrap on #PartII," Krasinski captioned the BTS pic, adding, "See you on March 20th!" Back in February, Krasinski teased on social media that the Quiet Place sequel will be released in May 2020, but it looks like horror fans will get to find out what happened to the Abbott family a little sooner than they anticipated.

In addition to confirming the release date, Krasinski's photo also teases the return of Blunt's character, Evelyn, and maybe even Krasinski's Lee, though the actor and director himself doesn't appear to be in costume. (Krasinski will likely only be involved in the sequel in a creative capacity, after the events of A Quiet Place, but you never really know.) The reemergence of the bridge — which appeared in several climatic scenes in the film — also hints that A Quiet Place 2 will continue to explore the impact of the monsters on the families living in the area, attempting to survive in their dystopian environment.

While no details about the sequel's plot have been released thus far, Krasinski and Blunt have shared their ideas for how to expand the Quiet Place universe. "I think actually it’s now what’s the next chapter and what happens next," Blunt told Entertainment Weekly in a November interview about her ideas for the sequel. "I think people feel very invested in this family. ... I think it’s such an open book right now."

Krasinski, meanwhile, told the outlet that he was planning to introduce a brand new set of characters in the Quiet Place sequel. "This is a world you can play in, this isn’t just a character to remake ... it’s actually a world, which is a whole different, very unique experience," the actor, writer, and director said at the time. "It’s not like Alien or Jaws where the main villain is the thing you’re repeating; it’s an actual entire set of rules and the circumstance that the world has undergone that you can play in very different facets."

A month later, Krasinski told Deadline that A Quiet Place 2 would delve deeper into the world that the first film created, explaining that it's the opposite of a tradition sequel set-up. Rather than revisiting a hero or villain, Krasinski said, "we have the world, and you can drop whoever you want into that world and everyone feels connected to it."

He also admitted that it was the chance to explore that world once again that finally convinced him to make a sequel, as he was opposed to the idea for quite some time. "The reason I decided to go back, in the end, was this world is so rich, and it's so much fun to explore," Krasinski said. "There are so many different things to see now. Everyone else in the world is experiencing this, so I'm curious to see what that looks like from another perspective."

Krasinski might want to keep most of the details about A Quiet Place 2 under wraps, but it's clear based on his latest photo that the upcoming sequel will be just as creepy and terrifying as the original.

More like this
The Biggest Differences Between 'Bullet Train' & The Book It’s Based On
By Arya Roshanian
The 'PLL: Original Sin' Creators Say A’s Identity Will Be “Very Clear” By The Season Finale
By Alyssa Lapid
'The Sandman’s Ending Is A Departure From Neil Gaiman’s Comic Book Series
By Kadin Burnett
Twitter Is At Odds Over Taylor Swift’s Possible ‘All Too Well’ Oscar Run
By Brad Witter
Get Even More From Bustle — Sign Up For The Newsletter