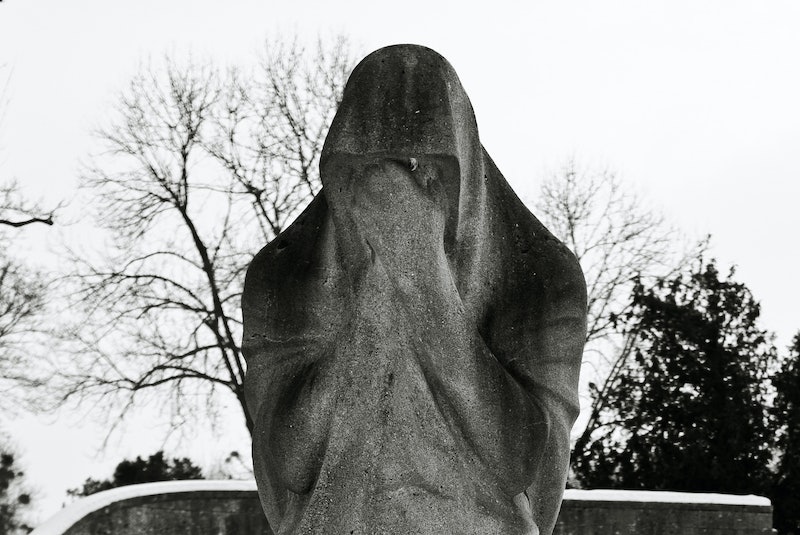 Every culture has its own way of handling death, the same way that every individual person grieves differently for a loved one. We're used to the death rituals that modern American culture practices, whether we've experienced them ourselves or not: After somebody dies, surviving relatives will attend a funeral for them in all black clothing, and typically the deceased will either be buried or cremated; people will give eulogies; the family sits in the front; everyone eats afterward. We put make-up and fancy clothes on our deceased loved ones before we put them in the ground. There are variations to this script, of course, but generally these are the customary ways that we learn to grieve. Unsurprisingly, though, people have different customs for dealing with death all around the world, many of which are a far cry from what we have done ourselves.

Of course, there is no "right" or "wrong" way to grieve for someone, and that is the beauty of all of these different customs. We can understand the broad scope of human nature and its resilience by seeing that we have so many ways of dealing with something that is scary and unknown, no matter where you are from or what culture shaped who you are. Here are a collective of death customs from cultures, past and present, all around the world that differ from what you have probably experienced in the past:

In Tibet, they call this burial practice "wylie," or "bird-scattered," and it isn't really a burial at all. They prepare the corpse and leave it on an elevated part of land, and then burn juniper to attract vultures and other birds to consume it. The practice manifests from the idea in Buddhism that your body is just a shell for your spirit, and follows the Buddhist tenant of being generous to nature. Sky burials are still practiced in areas of Tibet, provinces in China, and a small part of Mongolia.

2. Bathing of the Dead

In Muslim culture, it is traditional for the family members of the same gender to bathe their dead in three customary washings. The first washing uses water infused with plum leaves, the second employs infused with camphor (from the wood of a camphor laurel tree in Asia), and the last is done with just purified water.

A practice that is rarely performed in the modern day, endocannibalism is the ritual eating of dead family members or friends. The Fore tribe in Papa New Guinea is most well-known for the ritual, which did not evolve from starvation, but rather respect for the dead. It is customary for each member of the family to eat specific parts of the person, which all symbolize different attributes.

In Japanese traditional Shinto funerals, the dead are often given new Buddhist names in Kanji, to prevent them from returning if they hear their own name called on Earth. The renaming typically occurs at the funeral that follows their wake. The length of the name depends on the person's lifespan, or the amount of money their relatives donate to the temple, making it a somewhat controversial practice.

A province in Sichuan is famous for its 400-year-old hanging coffins, which are all perched along a mountain cliff. They were left by the Bo people, who died out after a massacre from the Ming Dynasty, and experts in the field believe that they hung the coffins on cliffs to bring their loved ones closer to the gods.

In the 1800s, the earliest form of photography—the daguerreotype—was invented. It was time-consuming and expensive to take a photograph, but for families with a deceased member, it was their last chance of getting a permanent image of their loved one. As a result, a lot of families took post-mortem pictures, even using special devices to prop up the dead so that they looked alive. The deceased's eyes were either propped open, or pupils were drawn in after the fact.

7. Kissing Of The Body

A modern funeral practice in parts of Africa came to the forefront of media attention with the spread of the Ebola virus last year. It is traditional in some areas (including places where the virus was prevalent) for family members to kiss and touch the deceased, and to have one last meal in their presence, both of which are to ensure their entry into "the other world".

8. Turning Of The Bones

In Malagasy, Madagascar, every seven years they will perform the ritualistic famidaha or "turning of the bones," in which they dig up deceased relatives, celebrate them by dancing around their bodies, and then clothe them and rebury them. The living frequently ask for the guidance of their dead relatives, and the ceremony is meant as an appreciation for all of their help. The festivities usually take about two days, and will occur in the spring or summer months.

In South Korea, due to lack of grave space, the government issued a law that family members could only be buried for sixty years before they had to be dug up, so cremation has become a lot more popular. An entrepreneur capitalized on the cultural shift, and is now creating beautiful "death beads," where the ashes of the cremated are transformed into beads of pink, green, and blue. Rather than worn, they are displayed in decorative containers.

The recent environmentally-friendly funeral practice of converting ashes into a biodegradable urn that will grow into a tree has started making a stir in the past year. This skips traditionally environmentally-harmful steps like embalming and coffin burial, and has the potential to create small forests where there were once graveyards.

A recent trend in Ghana is the rise of "fantasy coffins," elaborately designed and beautifully made coffins that represent something that defined the deceased in life, like their career or great passion. You may have seen the this article depicting some of the most captivating ones from Ghana Coffin.

More like this
The 8 Best Chew Bones For Puppies, According To A Vet
By Andrea Hannah
25 Things I've Reduced My Life To, In Addition To WFH In My PJs
By Ginny Hogan
Your Daily Horoscope For August 12, 2022
By Mecca Woods
The Spiritual Meaning Of The August 2022 New Moon
By Nina Kahn
Get Even More From Bustle — Sign Up For The Newsletter