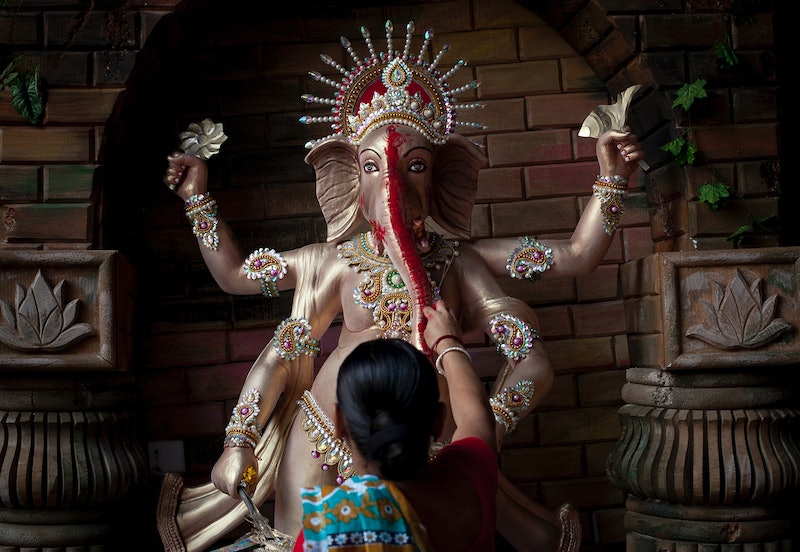 They say that “the only certainty in life is death and taxes” — and it’s true. You live your whole life, try to make the best of it, pay your taxes, and then you die. Whomp whomp. But luckily for those of us who aren't quite at peace with the fact that death is inevitable, each religion out there has a different idea of what exactly happens to us after we die. And it’s in these theories and beliefs that those of us who fear death can hope to find some solace. Sure, we might not know exactly what death really is, and we’ll never really know for sure until we’re there, but that doesn't mean we can't imagine a few possible scenarios ... right?

While Heaven and Hell are fairly common beliefs, especially for Christian-based religions, there are many other theories out there as to what to expect when the lights go out in our lives. From Christianity to Scientology to Hinduism, here are seven religions and what exactly they believe happens after you die.

Who knows, maybe one of them will make you feel better. After all, though religion is all too often a source of arguments, hate, and even wars, each one is pretty beautiful in its own way.

Hinduism is a religion that believes in reincarnation based on karma. In Hinduism, there are three types of karma: that of past lives, that of the present life, and that of the lives not yet lived. This karma will determine in what entity they will be born in their next life, with the goal of eventually being released from the rebirth cycle to reach moksha.

Moksha is a state of enlightenment that can only be achieved through a series of good deeds from one life to the next. Once Moksha is reached, there is no more suffering and ultimate self-realization comes into focus during that life. From there, with the rebirth cycle broken, the final step is Ioka (heaven).

The Buddhist religion also doesn’t see death as an ending, but rather a beginning to a new life through reincarnation. What one will be in their next life is the result of how they lived in their past lives.

A person can be reincarnated in one of the six “realms,” as they call them: heaven, hell, human, animal, hungry ghost (the constant state of dissatisfaction), or Asura (the realm of constant fighting). This being Buddhism, none of the realms are permanent. To Buddhists, there is no death, just a series of lives based on accumulated karma, from one life to the next.

It is a core belief for Christians that how you live your life will affect the quality your death. Basically, those who were good people and lived by God’s rules will ascend to Heaven, presumably where everything will be perfect. Those who were bad, on the other hand, will be tossed into the fiery pits of Hell, where they will be forced to suffer for all eternity — which, if you’ve ever read John Milton’s Paradise Lost, sounds like the worst possible situation.

Catholics, however, have a loophole: they also believe in purgatory, in addition to Heaven and Hell. Purgatory is a place of temporary punishment for those who have yet to confess their sins. According to the Catechism of the Catholic Church:

All who die in God's grace and friendship, but still imperfectly purified, are indeed assured of their eternal salvation; but after death they undergo purification, so as to achieve the holiness necessary to enter the joy of heaven.

Similarly to Christians, Mormons believe in Heaven and Hell. Where they differ is that Mormons also believe that before the dead can get to Heaven, they need to go through some preparation that involves instructions in the spirit world. After awhile, if all is good, they’ll get the OK, and their bodies and soul will be together again in Heaven for all eternity.

When it comes to Hell, again, the Mormons differ a bit — especially from Catholics. Whereas Catholics believe that once you’re in Hell, you’re there for good, Mormons allow for repentance so that you can escape all that eternal hellfire.

Tom Cruise’s beloved religion, created by science fiction writer, L. Ron Hubbard, is every bit sci-fi, as you’d think it is. Scientologists call the soul a “thetan.” To them, each thetan is reincarnated over and over again, bouncing from one life to the next, and is billions of years old. When a Scientologist dies, there are no hoops to jump through like there is with Christian-based religions, nor is there a judgment period — you just die and wait to pop up in another life. Luckily for Scientologists, they don’t believe in Heaven or Hell, so what they do in this life isn’t going to condemn them in the afterlife.

Judaism differs from many other monotheistic other religions in that there is no set concept of the afterlife. In fact, the Torah doesn’t even mention the afterlife at all, leaving much of what happens to personal interpretation. For the Jewish people, the greatest emphasis is on life itself, and respecting that life.

While some Jews believe in a Heaven of sorts, most don’t believe in Hell, at least not in the Christian sense of it. However, resurrection of the dead upon the arrival of the Messiah is a pretty common belief, as long as you have been good during your life. Those who were less-than-stellar prior to their death will not be resurrected to enjoy the World to Come, which is supposed to be pretty damn perfect.

Similarly to Judaism, Islam believes that on the Last Day (also known as Day of Judgment), Allah will resurrect everyone who has died. At that point, they will be judged and sent to either Paradise or Hell. Those who died believing that "There is no true god but God, and Muhammad is the Messenger (Prophet) of God," will be held in very high graces, and will be guaranteed a beautiful eternity.

But whereas the Jews will have a relatively uneventful waiting period before their possible resurrection, Muslims don’t have it so easy, especially if they’ve been bad during life. It is believed that these people will literally suffer every single second of every single day until judgment day, while those who behaved appropriately while alive will be in ultimate peace until it’s time for them to head to Paradise.

Unlike the Christian’s idea of Heaven, Islam’s Paradise is fairly decadent. It consists of lofty mansions, delicious food and drink, and "pure partners for intimacy," called "houris," because if you’re not banging your way through eternity, what’s the point? Muslims also believe that there are seven heavens in Paradise, and seven doors in Hell to different levels of punishment, depending on just how evil you were during life.

More like this
David Tennant’s Transformation In ITV’s 'Litvinenko' Is Astonishing
By Sophie McEvoy
6 Steps For A Successful Healing Manifestation Ritual
By Kristine Fellizar
10 Organizations To Support On Latinx Women's Equal Pay Day
By Caroline Burke and Mia Mercado
Dyson Is Dropping Futuristic, Air-Purifying Headphones
By Rachel Lapidos
Get Even More From Bustle — Sign Up For The Newsletter