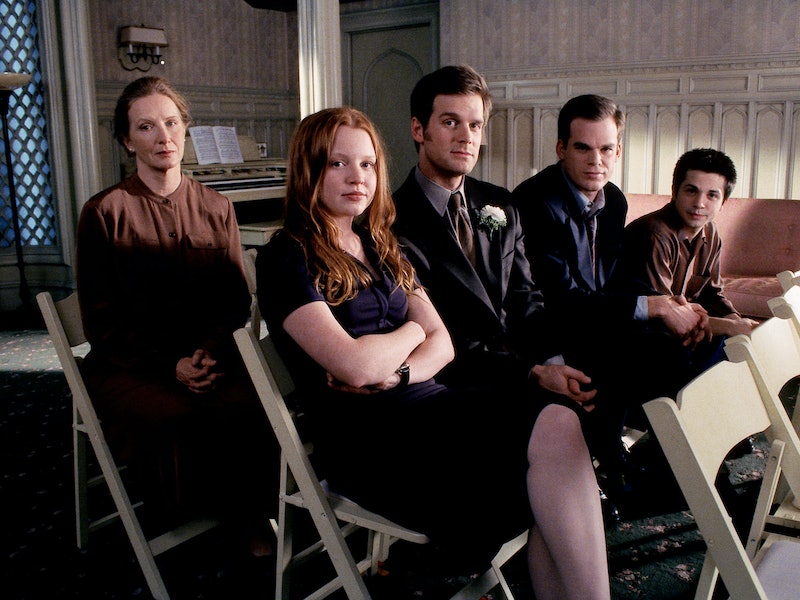 When we think of morticians, we tend to think of something like a bizarre, older man with strange habits and possibly some dark secrets — someone who is perhaps better with the dead than the living. The HBO series Six Feet Under may have introduced us to Nate and David Fisher, who sort threw a wrench in our preconceived notions about morticians, but by and large, it's a misunderstood profession. Because the topic of death is so very complicated and sort of terrifying, Bustle talked to Los Angeles-based mortician, Gina Krotee, to find out what it's actually like to be a mortician.

Here’s what Krotee had to share with us about her day-to-day work, what’s it’s like to deal with grieving families, and our fear of death itself.

BUSTLE: Can you pinpoint the exact moment when you realized you wanted to be a mortician?

Gina Krotee: I knew I wanted to work with people, but was unsure if I wanted to pursue therapy, event planning, social work, or any other ideas that were shooting around in my head. Around the same time, my boyfriend encouraged me watch HBO’s Six Feet Under. It wasn’t like I didn’t know the profession existed — I grew up watching My Girl — but the show is where my interest really sparked. At the time, I was interning for a wedding planner.

For my senior project in event planning, I decided to ditch the wedding planning profile and find myself a funeral director to interview. I didn’t know anyone working in the funeral industry, so I got on the phone with a bunch of funeral establishments in the Orange County/Los Angeles area, trying to get an interview with ANYBODY. Out of around fifteen phone calls, one person called back. That call is probably responsible for my entire career. I drove to meet the woman at a mortuary in Los Angeles, the mortuary I now work at, and interviewed her. I walked out of there with a pretty good idea of what I was doing when I graduated.

What sort of education is required to become a mortician?

I should begin by saying each state and their requirements for licensure are different. [For me], it was three semesters, full-time. Graduation is contingent upon passing the National Board. To be a licensed funeral director in California you only need to pay for and pass an exam. I did that while I was still in school. To be a licensed embalmer is much more difficult. You need to successfully graduate mortuary school, pass the board, then work two full years as an apprentice embalmer.

Do you find that, as a woman, you’re in the minority in your profession?

In California, absolutely not. Most of my graduating class was female, as is most of the mortuary staff at the company I work for.

The amount of women working in funeral service has been rising steadily in California over the past twenty years or so. I believe so many women are finding their calling here because females tend to naturally be warmer, gentler, and more natural caretakers. Sure, it’d be nice to have an extra foot and fifty more pounds on me when trying to get a 300 pound man onto a gurney, but when meeting with families, I’ve never had a negative reaction for being a young woman. I know the type of person I’d want to take care of me if I died, or if someone close to me died. I try to be that person at work every day.

My job is different every day. On any given day I might do a load of paperwork, meet with a family, work a funeral service, embalm, get a decedent ready for their service, clean ... the list goes on. If you work in a mortuary, you clean a lot. Most people think being a mortician is doing the dead’s hair and make-up. I definitely do a lot of that, but that isn’t the only thing.

there are days when I get home, plop onto the couch, crawl all over him, and he gives me that side-eye look that implies, "Go take a shower first — I know what you did today."

What’s the usual reaction you get when you tell people what you do for a living?

When people find out what I do for a living, their reaction is typically either disgust or complete intrigue, but I rarely experience something in between. Most people are taken aback at first, but then want to ask a lot of questions. The subject of death is pretty taboo … I witness that on people’s faces frequently.

If someone wants to look at me with disdain because I’m in the funeral industry, that’s fine, but it is ignorant. I work as much with the living as I do the dead. And being dead isn’t a reason to freak out — I still see them as people. They aren’t alive, clearly, but they still have people who love them and a life they’ve left behind, and you are the last person who will care for them. I know I do good, important work, and the work I do makes me a better, more thoughtful person everyday.

How does your family feel about it?

A major struggle I’ve faced is the acceptance of members of my family. Formaldehyde is a carcinogen; disease and blood borne pathogens exist. These things are scary, and I know my susceptibility bothers my loved ones. I don’t do potentially dangerous procedures every day, but when I do, I wear full protective equipment and am extremely careful.

I’ve been with my boyfriend since before I was in the industry, so I haven’t had to deal with the conversation on a date. He's always been incredibly supportive of my career and me. However, there are days when I get home, plop onto the couch, crawl all over him, and he gives me that side-eye look that implies, "Go take a shower first — I know what you did today."

Do you ever get spooked?

I remember the first time I went into the embalming lab during mortuary school. There was something so chilling about knowing I was going to walk into a room with someone’s body lying on a table, and that I was going to embalm them. Most people in my class were excited because they were in school to become embalmers — but I wasn’t. I wanted to work with families or possibly do grief therapy, but embalming was a requirement for graduation, and I had to do it.

I was afraid and felt like crying. But I put my big girl pants on, I went in there, and learned to embalm. I learned that dead bodies are actual people and should be treated with respect, not repulsion or fear. I actually ended up graduating with the professor issued Embalmer’s Award and went on to pursue my apprenticeship in embalming.

Sometimes it is hard. People can die in some really scary ways and I have seen some things that you’d think would haunt me when I close my eyes, but they never do ... I focus on the body as a memory of their life. They aren’t in there any more and there is nothing to be scared of.

there are some instances where you can’t help yourself from getting emotional; dealing with parents who have lost children is extremely difficult. I just take a deep breath before walking into the room and remember that any discomfort I feel is nothing compared to what they are going though.

Do you have a specific way in which you prepare to talk to a grieving family?

The first thing to learn is that you can’t take their pain away. Once you get over the idea that you can fix them, you're really fine. Initially, talking to grievers is tough because they are usually crying … but when it happens every day you get comfortable around the discomfort and get better at your job. You can’t make them feel better and you shouldn’t try to make them stop crying or offer advice because “you know how they feel.” Honestly, the best advice I can give someone new is to listen and be empathetic.

I volunteer at a grief support center where I lead support groups, and that has really helped me get even more comfortable around grievers. There are some instances where you can’t help yourself from getting emotional; dealing with parents who have lost children is extremely difficult. I just take a deep breath before walking into the room and remember that any discomfort I feel is nothing compared to what they are going though.

I think it is completely natural to be afraid of death. It is the ultimate unknown and there is nothing settling about that. I am certainly afraid of dying, but what puts me at ease is knowing that I’d be taken care of and that my family would be taken care of.

Western civilization is pretty death-phobic. People mostly die in hospitals, away from their homes and out of sight from friends and family. The rate of direct cremation with no services is also rising. The more death is detached from our lives, the scarier it will become.