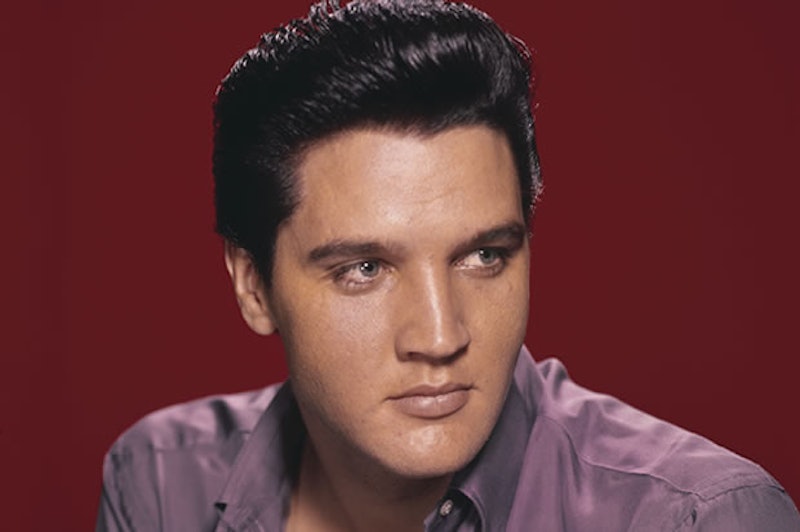 It's weird to think that Elvis Presley, the OG rock star crush, would have turned 80 this week. Aside from maybe Frank Sinatra, Elvis held power an intense fandom of swoony teenage bobby-soxers like no one before. But let's be real: how much do millennials think about him on a day-to-day basis? OK, let's rebrand: what if Elvis was born 50 years later and now, at 30, was slowly and subtly tap-dancing towards the tail end of his career?

You may think the concept of an Elvis with an iPhone sounds cheap, sacrilegious even. But with all due respect, he died on the toilet decades ago. That aside his image is used by dozens of impersonators to officiate over drunken couples in Vegas. So just saying, he's done worse. Maybe he'd fit right into this generation, where we blog desperately about the rise-and-fall of our pop stars.

But it's a very different world than it was in the '50s (and '60s. And the end of the '70s). Certainly the Elvis persona would need some adjusting for the new generation. So here's what I think a 30-year-old, Elvis would be like today at a crucial turning point of his career.

Now, nobody can doubt that Elvis was the King of Rock and Roll. But the less cool part about that? He basically got the crown by co-opting the stylings of black artists and riding that sound by being a lighter face. That's right, Elvis was also the original King of Appropriation. Music history is depressing.

With this in mind, I imagine Elvis would be more in the legions of a wildly successful white rapper. On the scale of Eminem to Macklemore, I'm picturing more of an Eminem in terms of success, but a Macklemore in terms of general appearance. Elvis's big coats are retained, his pompadour is shaved at the side, and he did dabble with grills during a dark moment in 2010. Next Spring he's releasing his men's collection of leather separates with Christian Siriano at the helm. It'll be blogged about on The Cut for weeks.

Why would Elvis deny the Internet continued access of his beautiful visage? Elvis has a finely curated Instagram, one that would make Taylor Swift (who he dated back in 2011) seethe with jealousy. Elvis's Memphis Mafia, 2015 version, is an interesting pack of entertainers, from Justin Timberlake to Justin Bieber. Go figure. Kanye West and him have gotten into some Twitter scuffles in the past, particularly when Elvis beat him at the VMAs with his song "Blue Suede Kicks." They have since moved past it. Truth be told, his Twitter game is a little less impressive, but he still has 40 million followers, and gets hundreds of thousands of likes of tweets that read "Have any of you seen the last episode of The Wire yet? #omg #mercy"

Where to begin? Well, being a white rapper in 2015 comes with a lot of critique—you can ask Iggy Azalea about that one—and while he evaded backlash in the early years in his career, every time he releases a single today there's a ton of articles talking about his problematic place in the music industry. There was also the time he pulled a James Franco and was caught making out with Bella Thorne who is, to remind everyone, 17-years-old. But this is just the top of his slow downward spiral, and slowly his addictions start to catch up with him.

Two years from now Elvis, struggling for a comeback tour, trying to talk Ariana Grande into it, will be seen doing blow off a recently divorced Miley Cyrus's stomach. This will be the top trending headline for a week until the third royal baby is born, and then everyone will forget about it.

In real life, Elvis was stacked with rare and special beauties. From his stunning ex-wife Priscilla and her magical bouffant, to the sherbert-haired sex kitten Ann-Margret (who he had an affair with on the set of Viva Las Vegas).

Elvis's love interests in 2015 would be a little more smattered. Yeah, he dated Kate Upton for a magical month or so, and his brief marriage to decadent depression queen Lana Del Rey was the stuff of legends (although who KNOWS what Lana would be like musically in such a world). The glory days are wearing thin, however, and years from now he'll be reaching into Hollywood's discount bin for whatever's left.

By 2018 Lindsay Lohan, which he'll meet on the set of Lifetime's Boy Meets World biopic, will have a grimy, torrid affair with him, and it'll bleeding into the tabloids in a baaaad way. Luckily at such a point he won't have much of a career to save.

Would Elvis be an icon in 2015? It's hard to say. Given the way fame eventually wore at him until he was a walking health risk in a bedazzled jumpsuit, I think 2015 Elvis would either fade or burn out soon enough. Dead in 2020 from a Molly overdose, if those are things that happen. Are people still into Oxy? Maybe that? I can't keep up with the drugs kids are using these days...

Despite his follies, though, be it womanizing, drugging-it-up, or stealing music from an entire culture, Elvis still deserves props for the influence he holds over us in 2015. We probably wouldn't HAVE this world obsessed with pop icons without him. It wouldn't have Bruno Mars, or our dear Lana, or the entire career of John Stamos, or even The Beatles (although the last one probably holds little weight over kids today). Elvis deserve props today, because without him, who knows if our society would be the youth-centric celebrity-obsessed, entertainment-driven sphere that we've all grown accustomed to?

And more importantly, who would marry all those drunken vacationers?