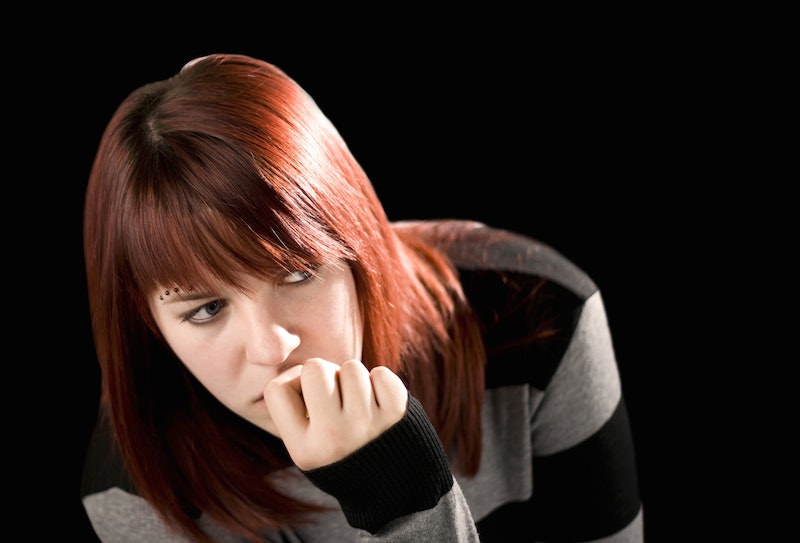 Earth worms' faces. That’s how I began to describe my fingernails to friends — partly cracking a joke, partly wishing for some sympathy. My sister first used the phrase when she unwittingly attempted to paint my fingernails a dark red color, which only emphasized the crusty blood I had forgotten to wash off after I last pulled a cuticle from the tip of the nonexistent nail to the already agitated nail bed. If that made you cringe, welcome to the life of a serious nail biter. It only gets worse.

I can’t remember the first time I started biting my nails, only because it was that long ago. I have been biting for as long as I can remember; since I got bored riding the bus to second grade, since the anxiety I felt before taking standardized exams in high school, and even since the last set of finals during my third year in college. At first, it was more of a nervous tick. Whenever something bothered me or left me pensive (even if it was little me being upset over losing my favorite pencil), I would reach for my fingers, gnawing until I finally found the answer I was looking for (alas, the pencil was in my backpack the whole time!).

As I grew older, though, it became habitual. No matter how many times my mother told me to take my fingers out of my mouth, I’d persist on ripping, pulling, and chewing. Up until a few months ago, I decided my nail-biting would become a unique feature that I could market — because trying to stop my bad habit was just a hopeless pursuit, after all. Just imagine, people would be so impressed: “She’s so intelligent and witty, AND she’s a nail biter! How does she do it?!”

A few weeks ago, though, I revisited my nail biting and realized that no one is going to praise me (let alone hire me in a professional work place) if blood from my gnarled nails stains paperwork. Plus, who will shake my hand if the tips of my fingers look like, well, earth worms' faces? Surely not Eva Chen, Diane Von Furstenburg or Carine Roitfeld... or really anyone I admire and look up to in the fashion industry.

It was after these thoughts that I slowly raised my hands in front of me and examined my nails, as if I had done something terrible with my own two hands. While I didn’t strangle anyone — like in those overly dramatic horror movies — it was as though I was looking at my own murdered future. I wasn’t going to let a bad habit crush my dreams. I came to the conclusion that something had to be done.

THE INCENTIVE TO STOP

Like any rational human being, I asked Google for help. The search results for “how to stop biting your nails” were surprisingly unhelpful. I had tried all the remedies listed to get rid of my obsession already, and they all failed. Any manic nail biter like myself can get used to a stinky, bad-tasting polish, and gloves are too easy to take off. Looking at nail polish blogs were only momentarily inspirational until I realized how expensive and time-consuming pretty nails can be. The last real suggestion was to dip my fingers into a spice I didn’t like, or even hot sauce, to associate my nails with a bad taste. I wasn’t particularly fond of this suggestion, mostly because, well, who wants to smell like cumin all day?

The internet failed me this time, but what really got me to stop biting my nails was a constant reminder of what made me want to stop in the first place. As I inspected my gnarled nails, and lifted them towards my mouth, I remembered that one day I’d like to shake hands with really important people, be able to turn in paper work sans blood, and get a perfect manicure to post a photo on Instagram without being shy about my bad habit. I told myself that I was stronger than resorting to pulling cuticles and gnawing on nails. That I could better spend my time doing something productive instead of sitting in a daze, chewing my nails to oblivion. And even though I'm not Kylie Jenner, I can at least try my hand at stopping my bad habit.

I know something small like nail biting isn't going to define my ultimate destiny. It would be silly to think that a nail biting habit (or even pen clicking or skin picking or any other habit like that) would stop me from achieving my dreams. That being said, I knew trying my hardest to stop gnarling my nails into nothingness would be just that: An attempt at stopping a bad habit I've had for years. Even if I came out of it defeated, and had to live with disgusting nails forever, I would have more incentive to try new things and decrease negativity in my lie.

Slowly but surely, my nails have grown. While they’re still short and somewhat stubby, they look natural, manicured and (I know it’s hard to believe, but) even pretty with some neutral nail polish. I may never have nails comparable to Rihanna's or a hand model on QVC, and I probably won’t be trying out any cool nail trends anytime soon, but I’m OK with that. I’m proud of the fact that I could overcome a bad habit I’ve had for years, and that my "Extreme Makeover" nail edition has and probably will continue to motivate me to work hard at achieving my personal and professional goals.

So if you have a bad habit, I hope I inspired you even in the slightest. Bad habits come in all shapes and sizes, whether manifested in leaving dirty dishes to the mold monsters or failing to make your bed. If my experience has taught me anything, it's to try a little harder to rid yourself of a bad habit.

After all, there is always hope!