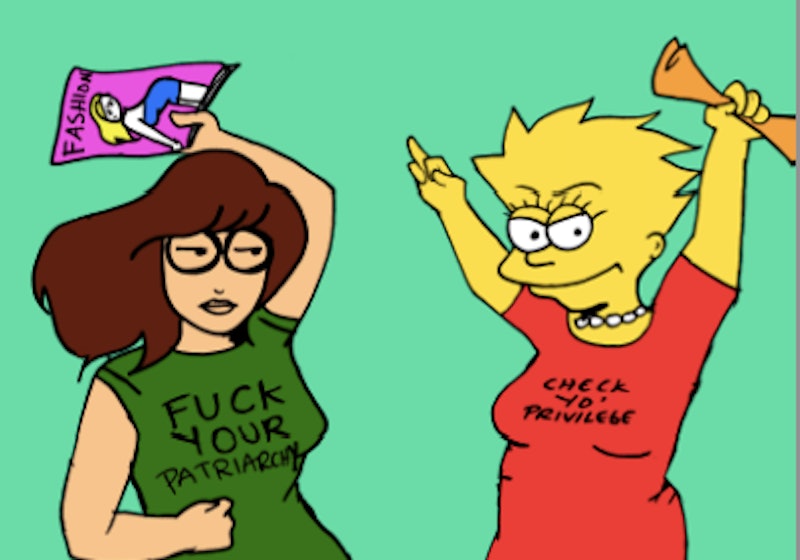 During this year's New York Fashion Week, a series of illustrations depicting '90s cartoon characters in 2013 fashions began making the rounds. There was Lisa Simpson, grown up and long-legged in short-shorts. There was Daria Morgendorffer, rail thin and sporting stilettos. There was Rugrats' Angelica in a hip-hugging dress.

Ugh, thought writer and activist Mia McKenzie. "Lisa Simpson, proud feminist with so much to say about gender roles, body shaming and capitalism, drawn in this hyper-thin, rich girl way? Why, baby Jesus? Why?"

So McKenzie enlisted artist Julio Salgado and a few other friends to re-interpret their favorite childhood cartoon characters in a much more body-positive and true-to-type way. The results are both hilarious and cutting. In McKenzie and Co.'s imaginations, Lisa Simpson and Daria met by way of a Smith College alumni group, made out after drinking too much at a Feminism and Media conference (but it didn't get weird) and now collaborate on a zine called Cat Fancy.

Dora had body issues for the bulk of her childhood, but in high school something snapped and she said Fuck. This. Shit. It was around this time that Dora began exploring other women’s bodies. [...] Using only her blog and camera, Dora fights fat phobia by showcasing the beauty of her cis and trans sisters – curves, dimples, stretch marks, and all.

Rugrats' Susie Carmichael "had a falling out with Angelica Pickles over her inability to recognize her white privilege," but eventually, Angelica got her shit together. Susie now runs an urban farm with her lesbian lover. And Go, Diego, Go's Diego? He works in the migrant rights movement, of course.

Check out all of the illustrations and awesomely radicalized cartoon fan fiction at McKenzie's blog, Black Girl Dangerous.