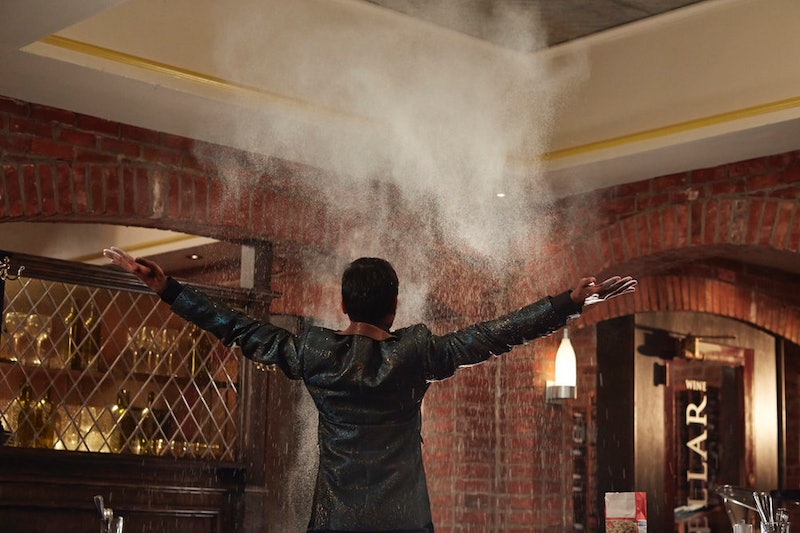 Parks and Recreation returns for its seventh and final season on NBC on Tuesday night, and a lot has changed since the last time we were in Pawnee. Grab your DeLorean, because we're going to the future. Exactly how much time has passed on Parks and Rec since we last saw Leslie Knope and the City Hall crew? The flash-forward in the sixth season finale took place three years later. The seventh season premiere episode is titled "2017," so I could concur that approximately two or three years have passed.

Here are a few of the futuristic elements we can expect from this season of Parks and Rec based on one awesomesauce trailer. So far, I'm counting delivery drones, Tom Haverford and Andy Dwyer as local celebrities, plus April holding a really cool see-through tablet that look like something out of Stark Enterprises. Also, there was something about Terry? It must not have been important.

While we're on the subject, may I pull a Ben Wyatt and point out something super nerdy about the way this aspect of the season is being marketed? While the font is reminiscent of Back to the Future (and the vintage Parks and Rec logo that we saw in an earlier season), they are also clearly trying to pay homage Star Wars with the crawling text through outer space. This is not OK! Star Wars takes place in the past, not the future. It's literally the first thing you see when you watch a Star Wars movie. "A long time ago, in a galaxy far, far away." I'm not even that big of a geek. Right? Anyway, watch the trailer for yourself below.

Look, I wouldn't be a true fan of Parks and Recreation if I didn't point out details like that.

Another important question as we near the final 13 episodes is whether or not there will be flashbacks. Are we supposed to pick up in 2017 like the characters took a three-year vacation from being filmed? Besides the "2017" preview, there are also weddings and a possible campaign for Governor to look forward to this season. How are we to believe that all of this happens three years after Leslie took her new job and Tom opened his bistro? Surely all these major life events are a little more spread out than that.

In the preview above from the season's second episode, "Ron and Jammy," we learn more about Councilman Jamm's relationship with Ron's ex-wife Tammy 2. This seems like a flashback if I ever saw one, though of course they are flashing back to the present. Are we really supposed to believe that they've been together that long? It doesn't seem likely that Tammy 2 would commit to something like that.

I think this is our definitive proof that we haven't abandoned the Pawnee of 2014 and 2015 just yet. Plus, Parks and Recreation is bringing back Jon Hamm as "Ed," an incompetent character who was fired at the end of the flash-forward in a surprise cameo. How he figured into the National Parks office that Leslie is running out of Pawnee should be fun to explore! A whole lot can happen in three years.