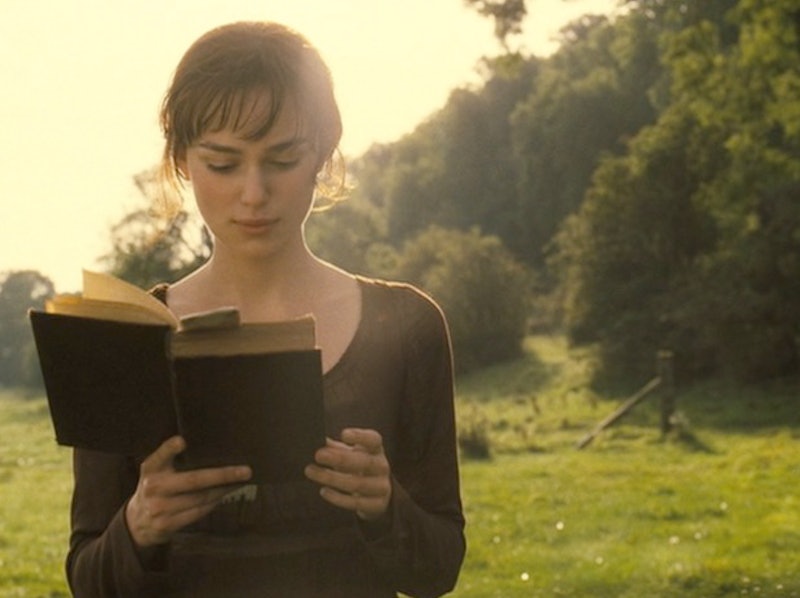 I joined the cult of Austen at age 14 when my mother passed along a weathered copy of Emma with a heartfelt recommendation. At first I was skeptical (cut me some slack, I was a teenager and this was a recommendation from my mother), but after the very first chapter I was hooked. Later that same year, I purchased a parasol and took to wandering through the backyard in long skirts, reading and gazing longingly off into the distance.

Some of that highly suspect behavior could have stemmed from one of the two or three (hundred) times I watched Jane Austen's peerless protagonists fight for love and freedom on the big screen. From Colin Firth to Kiera Knightly, over years the best of the best have flocked to fill out the cast in on-screen adaptations of Austen's work, and it's not hard to understand why.

The world of a Jane Austen story is perfectly formed and fierce in its honesty, integrity, and dreamy late 18th century elegance. The characters are so daring, the drama so layered, and the setting so sublime that once you go Austen you can never go back, and the world is forever altered by your encounter.

So if you, like me, pine for the opportunity to walk arm in arm with another woman wearing a bonnet, if you've learned the value of a rational mind and a romantic view of marriage, if you've lived for years in the world of the Jane Austen novel and loved every minute of it — congratulations, you're in a class of your own. As a Jane Austen-lover you'll forever see the world just a little bit differently, so why not celebrate those singularities?

The world out there looks just a little bit different to to the true Jane Austen-devotee. You understand:

1. The Value of a Letter

These days communication might be all about email and snapchat, but if I've learned anything from Jane Austen I've learned not to discount the value of a letter. There's something genuinely special about breaking the seal on an actual physical envelope and seeing the handwritten scrawl of a loved one awaiting you on the page. After years spent taking heart in Eliza Bennet's encouraging correspondence with Charlotte Lucas, or waiting with Marianne Dashwood and bated breath for a communication from Willoughby, any true Austen fan knows the value of a letter.

2. The Meaning of Sisterhood

Without a biological mini-me of my very own, I've struggled over the years to come to grips with the depth of the sisterly bond. Only after following stories of the Bennets and the Dashwoods for years on end did the truth universally acknowledged every Jane Austen fan become clear to me — sisterhood is about so much more than simple biology. To the true lover of Austen, sisterhood is about coping with each other's character flaws and emotional insecurities, sisterhood means wanting the best for each other even you have nothing in common, sisterhood demands that we stand by each through the follies of romantic misadventure and some seriously questionable decision-making.

The harsh light of truth can be glaring for those who have never looked selfishness right in the eye. Of course, any Jane Austen fan will already be intimate with blind ambition, whether in the form of Emma Woodhouse's self-interested attempt at matchmaking or Willoughby's vain seductions, so there's no surprising a Janeite with the darker side of desire.

There's nothing I love more than a good walk, and Jane Austen certainly knows how to make the most of a little outdoor time. From Eliza's intimate wanderings with the inimitable Mr. Darcy to Emma's picnic with the overly solicitous Frank Churchill, a true Austen fan knows that any time spent in the great outdoors is also a unique and precious opportunity for righteous endings and new beginnings. A true Austen fan would never let a walk go to waste.

5. The Power of Humility

Jane Austen's willful host of self-assured protagonists make a strong case for reserving judgment and honoring the possibility of genuine misunderstandings. After all, anyone who has cringed all the way through that first Bennet/Darcy ballroom scene or suffered through Emma's early dismissals of the aging Mr. Knightley will surely see the value of reserving judgment and proceed with a good strong dose of caution.

6. The Dangers of Matchmaking

Other than Army Ranger or Deep Sea Diver, it's hard to imagine a profession more dangerous and unpredictable than matchmaking. Over the years I've seen countless friendships ruined by a bold attempt at matchmaking gone awry, but me? I've stayed out of the game, and it's all thanks to a little time spent in the world of Austen. After all, any true Austen fan can tell you that matchmaking is riddled with uncertainty, hopped up on hubris, and a recipe for epic and oncoming disaster.

7. The Possibilities of an Epic Party

Until you can lose your social standing, your future, your friends, and your family all in one evening, you cannot fathom the monumental impact a party can have. Of course, if you're truly a lover of Jane Austen then you've struggled through countless balls in which lives, loves, and fortunes hung in the balance, so you already know that a party is never just a party.

8. The Joys of Inheritance

Sometimes it can be easy to take one's legal standing entirely for granted, to forget that there was a time when women couldn't vote, sign contracts, or inherit property. Of course, if you've read enough Jane Austen than you're already all too familiar with vagaries of English estate law. As a true Austen fan, than even before Downtown Abbey highlighted the utter unfairness of the old English system of inheritance, you were already shaking your head at the sorry situation faced by the Dashwood sisters and the Bennet clan.

Ahhhh first impressions — we've all made them, we've all fallen victim to them, and we've all gotten past them, but only a lover of all things Austen will realize the grave importance of these early moments. Your mother can tell you to fix your hair, your teachers can tell you to prepare for those interview questions, but only a brush with Lydia and Wickham as they lock eyes for the first time or a day in the life of Emma Woodhouse will truly leave you determined to be your best self from the very beginning, and to strive to see the best in others.

A Jane Austen novel would be nothing without the rakish dandy who swoops in to woo the hapless female when he believes her wealthy or stupid enough to put out without a proposal on the table first. These days, despite Beyoncé's tireless efforts, we still seem to have trouble recognizing a scrub when we see one, but a Jane Austen fan will always look a little closer when it comes to choosing a lover and that extra attention will make all the difference when it comes to spotting toxic love before it's too late.

Whether or not your sister's run off with a scurrilous soldier, we all understand the need to keep up appearances. Of course, the true Jane Austen aficionado understands that when we're faking it for the cameras, it's not just our own personal appearances that require constant management, but those of our friends, family, and close circle of friends as well. After all, if a Jane Austen novel proves anything, it demonstrates how quickly and thoroughly we are judged by the sins of our family and friends.

These days, if Facebook has taught me anything, marriages are still happening in spades. But the true Austen-lover knows that while some proposals are certainly on the up-and-up, you always have to be on the lookout for those rough characters only in it for themselves. From the lifeless and loveless Mr. Collins to the desperate and earnest Edward Ferrars, a real Austen fan will understand the nature of the indecent proposal better than anyone else out there.

I think we can all identify with money trouble, whether you're simply short on funds for this week's taco night or desperately saving up for the new iPhone, but only Jane Austen lovers will see money troubles through the lens of total and complete social annihilation. After all, in the world of Jane Austen, losing your inheritance means losing not only your livelihood but also the friends and neighbors you've grown up with and your dreams for the future, which really puts money trouble into perspective, wouldn't you say?

Back when I lived in Vancouver, there was a guy renting the apartment across from mine who spent countless hours in the dark, standing at his living room window (which just happened to face mine) and staring out onto the street with binoculars in hand. I lived through one year of peeping Tom without ever really understanding just how nosy neighbors could be, but back then I didn't have Jane Austen on my side. After years of reading and hours of screen time, I've learned, as all Janeites do, that although you might never really know your neighbors, that won't stop them from learning everything they can about you.

These days you can't even drop a call without an immediate follow-up to make sure that "we're all on the same page," but as any true Jane Austen fan will tell you, miscommunications are an unfortunate and very real fact of life. After wading through the on-again off-again affections of a certain John Willoughby, or the poorly timed comments of Mr. Fitzwilliam Darcy, an Austen fan will have learned that miscommunications are a part of life, and the only way to truth (and true love) is straight through the B.S. and onwards to honesty.

Recently, I made a trip to the English countryside for a wedding, and I have to say that with the charming hedge rows, the billowing white clouds, the stoic stone fireplaces — I was thoroughly won over. But my partner? Not so much. What on earth, he wondered out loud, makes this place so much better than any other patch of forest. I gave the matter some thought, and the only answer I could come up with was Austen. I've spent enough time with Jane Austen that to my mind the English countryside is blessed, rendered both magical and magnificent, and I am not alone. For any real lover of Austen, the English Countryside takes on meaning of epic proportions far beyond its pure aesthetic value.

Whether it comes from mothers, fathers, sisters, cousins, wealthy old aunts or cadgy young bachelors, the advice flies fast and loose in a Jane Austen novel, and it takes a true fan to recognize that bad advice for what it really is. Of course, when you've read enough Austen novels, you quickly learn that just because your mentor and mother-figure tells you to break off your engagement, you shouldn't necessarily follow that advice (I'm looking at you, Anne Elliot). Separating the good from the bad and ignoring the bad advice altogether is just one more of the amazing affects of spending altogether too much time in the world of Jane Austen.