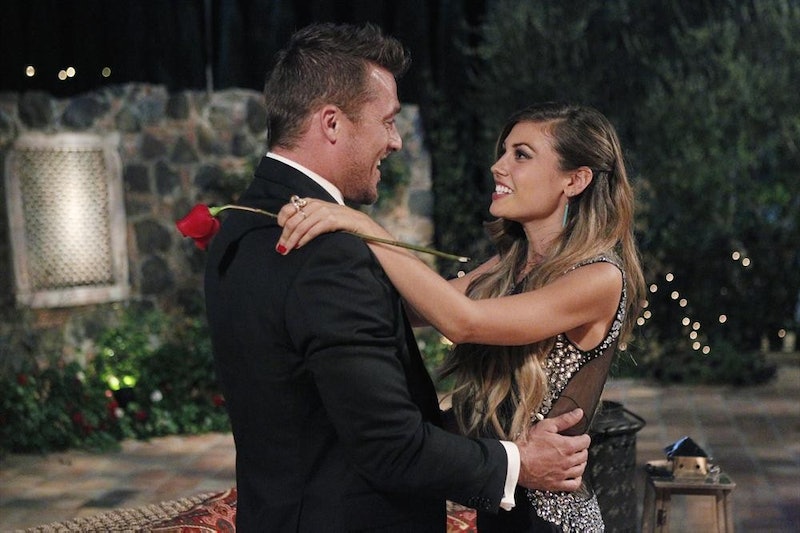 If newly minted Bachelor Chris Soules expected to have an easy season, by the end of the first cocktail party he was probably eating his words. Instead of the traditional 25 contestants, Soules was faced with 30 women to choose from, and on the very first night, he had to send home eight. Fortunately, that means 22 got to stay, and one of them was awarded with the coveted first impression rose: California waitress Britt Nilsson, who Chris definitely seems to have hit it off with right off the bat. Since they instantly had chemistry, this probably says a lot for her compatibility with Chris, right? Not necessarily. Because according to the bachelor himself, it seems that Chris doesn't pick Britt in the end.

How do I know this? Chris's recent appearance on Live With Jimmy Kimmel, which reminded me what a breath of fresh air our new bachelor is compared to He Who Shall Be Named from last season. (OK, I'll name him: Juan Pablo.) Chris is way better than Juan Pablo, and this interview basically proves it. Not only did Chris play a fun word association game that dropped a few spoilers on who may be eliminated sooner rather than later, but he also gave us a hint that Britt may not be long for The Bachelor competition:

It all started when Kimmel pointed out that Britt looks nothing like any waitress he's seen in Hollywood (you know, because she is ridiculously gorgeous), and he asked Chris if he knows what restaurant she works at. Chris's reply? "I don't know; we never got that far." Yikes!

That definitely sounds to me like Britt isn't hanging around for a long time — although if you want to be spoiled, Reality Steve certainly has his own opinions on the matter. Of course, this offhand comment could mean a lot of things. Chris might be joking, he might just be insinuating that she doesn't win the final rose, or he might be trying to throw us off. Either way, she has a nice head start in the competition being that she and Chris clicked so well after meeting for the first time.

Also, let's remember that the first impression rose doesn't necessarily guarantee success. It hasn't meant much in seasons past, and we're still very early in the season. Anything can happen, and according to that mess of an extended preview ABC hit us with at the end of the premiere, it seems that anything will.