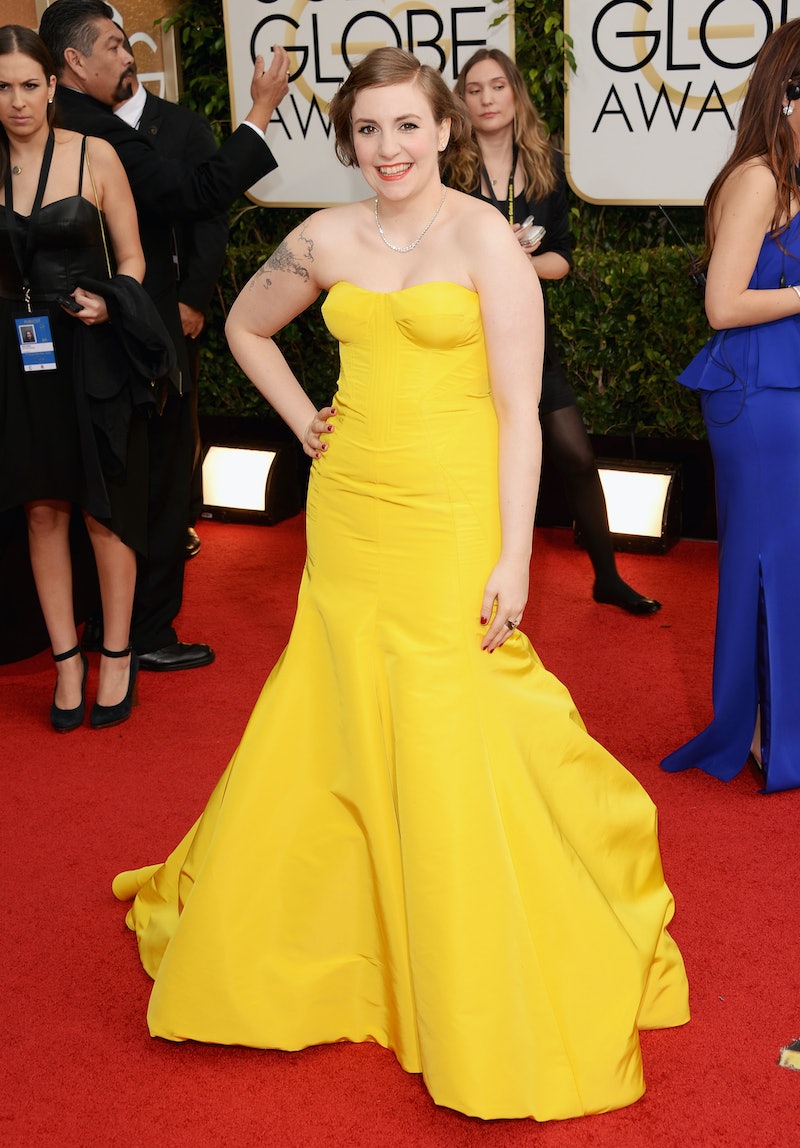 UPDATE: Lena Dunham tweeted on Monday morning to reveal that she has indeed deleted Twitter from her phone, and that the tweets she sent out during the show were sent to a friend to post on her behalf. She adds, "Sorry I confused you aka who cares."

Hold the phone, everyone. I am in a state of shock and confusion. The 2015 Golden Globes are under way and celebrities are already walking the red carpet and giving their first interviews ahead of the ceremony. When Ryan Seacrest caught up with the ever-controversial Lena Dunham, the Girls star dropped a confusing bombshell. When discussing the fact that the next season of Girls would be premiering on Sunday while the Golden Globes were airing, Seacrest asked if Dunham would be checking her phone to see how people were liking the season premiere. Then, Dunham revealed that she had deleted Twitter. Except... she actually hasn't?

"I deleted Twitter because I'm trying to create a safer space for myself emotionally," said Dunham. When asked to explain, she went on to say, "People threaten my life and tell me what a cow I am, so I... I check it occasionally, but it's not the same co-dependence that Twitter and I once shared... There's a lot of people I love on Twitter, but unfortunately you can't read those without reading deranged neo-c***s telling you you should be buried under a pile of rocks."

That sounds fair enough. After all, Twitter is a double-edged sword of giving fans the opportunity to tweet lots of love your way and enabling haters to spew some pretty awful vitriol toward celebrities they've never even met. However, Dunham's Twitter isn't gone. In fact, she posted a tweet a few hours prior to her red carpet interview to promote Girls.

So what on earth was she talking about? It's likely that Dunham did delete Twitter — as in, removed the Twitter app from her phone. After all, she did say that she checked the site occasionally, which would be a little hard to do if her Twitter had been deleted. Of course, that theory went right out the window when Dunham began tweeting while she was present at the Golden Globes ceremony — something that's a little difficult to do if you've deleted your Twitter app. I mean, the camera would probably have picked up on Dunham sitting there with a laptop on the table for these tweets.

If she hasn't actually deleted her Twitter — and if she hasn't deleted the app from her phone — then what was Dunham talking about on the red carpet? The only answer left is that she has deleted Twitter from her life. Instead of being addicted to the site to the point of co-dependence, or constantly wondering what's going on in the Twitterverse, Dunham apparently reserves her tweeting for big events and special occasions. It's basically like she broke up with Twitter, but forgot to send Twitter it's stuff back.

It's lucky for fans of Dunham and fans of Girls that Dunham's Twitter itself remains just as live and, perhaps, slightly less active as ever. At the end of the day, Dunham has to do what makes her feel safe and comfortable on the Internet — and, unfortunately, Twitter is not always a place where she can feel safe or comfortable just being herself. I find it refreshing that Dunham is able to take a step back from Twitter and, well, do her.

After all, she has seen no shortage of controversy, either recently or over the course of her career. It's nice for her to take a break, and she certainly seemed all the happier for it on the red carpet on Sunday. Sure, it means less Dunham-isms for people to enjoy pulling from her Twitter page, but that's all right. Girls has returned to HBO, so it's not like Dunham will be going anywhere anytime soon.