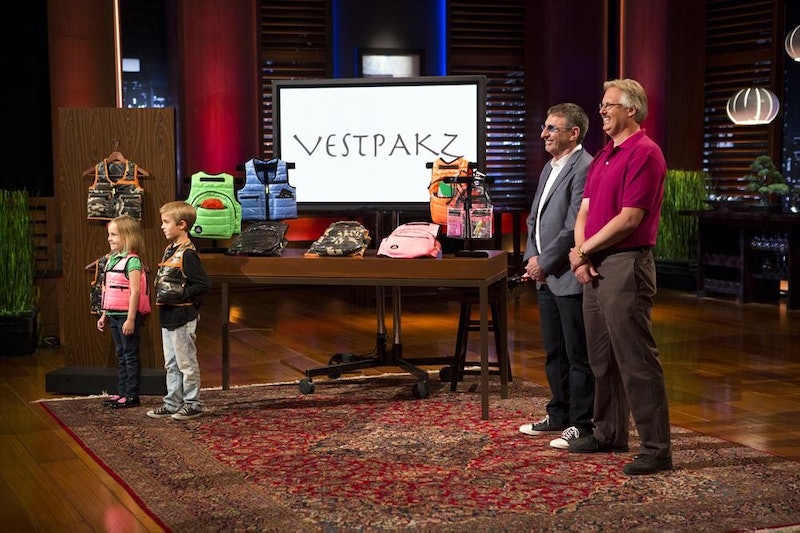 ABC's Shark Tank not only showcases interesting new products, but it also highlights how these products came to be. In the case of Vestpakz, which will be featured on Shark Tank 's special Tuesday night episode, the story of how it came to be is almost better than the actual product. Vestpakz were invented by a sixth grader (which puts my life into a harsh perspective) for a science project back in 1999. Since Christen Wooley Bell (who is now an adult and married) came up with the idea over 15 years ago, Vestpakz have been able to be purchased for a while, but could still use the backing of the Sharks.

The Vestpakz are a pretty ingenious idea. They are a vest that also acts as a backpack to help save the backs of school-aged children. Vestpakz are partners with Eastsport, so you can buy the vests through them for $19.99 each (they are currently all out of stock). The vests are offered in black, pink, and camouflage on Eastsport's website, even though other colors do exist.

Although the Vestpakz have been around for quite some time, the product really isn't a notable brand name. The company's social media is nonexistent (no Facebook page or Twitter), which is rare in 2015. The Eastsport partnership has definitely helped, but I can see why Bell's father Michael Wooley will be pitching the product to the Sharks.

But let's look at how Vestpakz have come from grade school science project to end up on Shark Tank.

They Were on Oprah

The young Bell got to go on The Oprah Winfrey Show after she came up with the idea of Vestpakz. That's pretty much the pinnacle of success right there. Bell said, "I was asked by my teacher to come up with a problem that we face in our everyday lives and solve it by inventing something." Although many of us may have encountered similar homework assignments, it's rare that the idea is so good that you end up on Oprah.

They Are Sold at Walmart

Vestpakz got a utility patent in 2002, but the Florida-based company did not end up partnering with Eastsport until 2013. With that partnership came a deal with Walmart (Eastsport is Walmart's biggest supplier of backpacks). Even with a big deal like this, the Wooley family (Christen, her father Michael, mother Cheryl, and brother Casey) still runs Vestpakz.

They Were Featured at the Smithsonian Innovation Festival

At the first-ever Smithsonian Innovation Festival in 2014, Vestpakz were one of the featured inventions. The event was held at the National Air and Space Museum in Washington D.C. and Christen's mom Cheryl was there to discuss her daughter's invention. "It’s important to encourage creativity and an innovative spirit in kids," Cheryl said.

Although the Vestpakz can't fit a lot of books (Eastsport advertises them as being ideal for ages 4 through 6), it's still pretty amazing that an 11-year-old girl's product has come so far. The Sharks may be skeptical about a deal since the product already has lucrative partners, but the Wooleys could definitely benefit from their expertise. So, we'll see if a deal goes down for Vestpakz at 8 p.m. on Jan. 13.