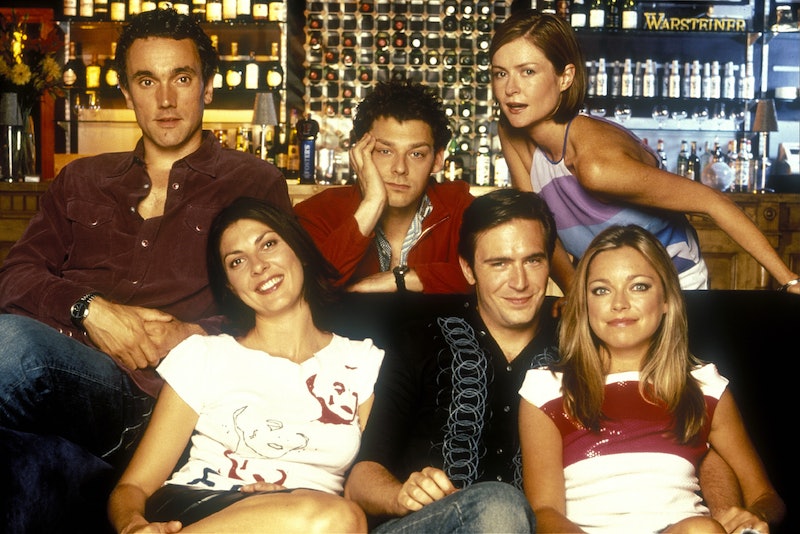 OK, so you've just binge-watched all ten seasons of Friends in the last two weeks. When you started, you thought, "Ooo! I'll just watch a couple of episodes! What's the worst that could happen?" Fourteen days and 236 episodes later, you're wearing the same clothes you were two weeks ago, your social relationships are strained, and you've used up all of your vacation time at work. Was it worth it? "Yes!" you cry, your body still thrumming with the euphoria of a decade's worth of comedy crammed into a mere fortnight, "I reached a higher plane of existence. I could hear the studio audience in my own mind. I have seen the face of God, and it looked like Gunther."

But now it's all over, and you are in a very delicate situation. As with most addictions, you can't just quit cold-turkey; if you do, the too-quick shift from non-stop ensemble comedy gold to the empty nothingness of real life will cause your brain to short circuit, plunging you into a permanent semi-comatose state, from which you will only be able to communicate via hummed snippets of "Smelly Cat". Don't panic, friend! I have just the thing to ease you back to reality: Coupling, a popular BBC ensemble comedy that ran in the U.K. from 2000 to 2004.

Coupling resembles Friends in some key ways: like Friends, its main cast includes six characters (three men and three women) in their twenties and early thirties, and its story lines focus on the trials and tribulations of dating and sex in a major city. Like Friends, the show depicts couples at different stages of dating. Susan and Steve start dating early-on, and we follow them as they navigate their relationship; Sally and Patrick are the "Will they or won't they?" duo of the group; and Jeff and Jane explore what it means to be single when you are very, very weird. Despite these similarities, Coupling is very much its own show, and worth watching in its own right. Here are a just few reasons why it should be next in your queue:

1. It was created by Steven Moffat

Before Steven Moffat became famous for his association with cult hits Doctor Who and Sherlock, he created and wrote Coupling. You won't find any science fiction or mysteries in this sitcom, but the show includes Moffat's trademark quick and quippy dialogue, as well as some fun experimentation with time and perspective.

2. It's raunchier than Friends

While Friends certainly plays with innuendo, Coupling is overtly—and often hilariously—about sex. Because British TV has fewer restrictions than American TV, Coupling's characters are free to discuss sexuality and the natural ridiculousness of sexual relationships in explicit terms. Just watch in the clip above, as Steve, Jeff, and Patrick discuss the pitfalls of the, ahem, Melty Man.

3. It plays with time and point of view

Throughout the series, Steve becomes known for his amazing, epic rants about a variety of topics. Here he is being surprisingly angry about cushions.

5. Jeff has too many legs

The Season 2 episode, "The Man With Two Legs," ends with Jeff needing to lose a leg in order to get the girl. I won't explain how this happens. Just go watch the show. Trust me, it's funny.

Coupling is available on HuluPlus and Netflix, so go get started before you collapse from Friends withdrawal. You'll want to parcel it out slowly because, unlike Friends, Coupling only has 28 episodes. Stick to a couple episodes a day, and you'll be ready to go back to normal human life in no time. Or, binge-watch Coupling over the weekend, and then start Friends over from the beginning. It's your life.