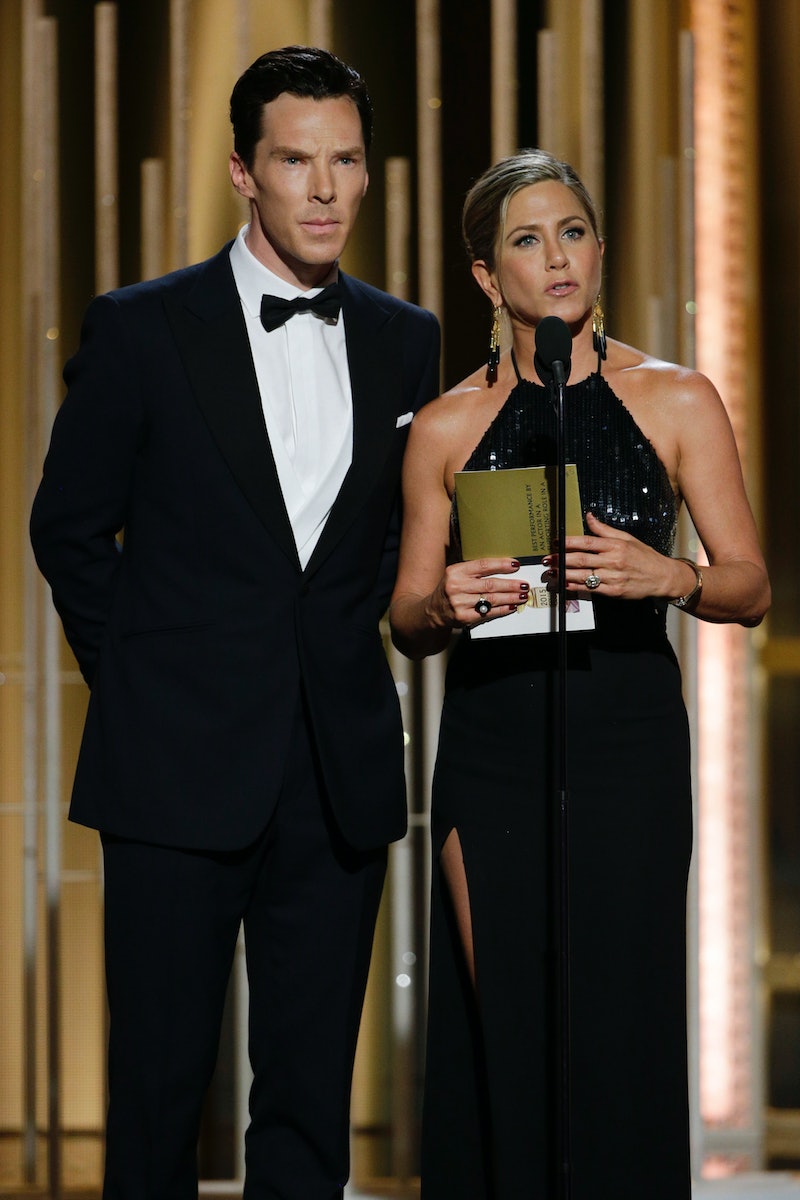 If you, like me, assumed that Tina Fey and Amy Poehler's opening monologue at the Golden Globes was going to be the highlight of your night, then chances are you were completely unprepared for the glorious event that transpired immediately afterward. You all know the moment I'm talking about: when Benedict Cumberbatch and Jennifer Aniston presented together at the Golden Globes. That's right, folks. Sherlock Holmes and Rachel Green were actually onstage together, and life as we know it will never be the same. But one of the great things about it was that this interaction was completely unplanned. Fey and Poehler simply stated that whoever volunteered first would get to present with the Friends star — and it was an offer our beloved Cumberbatch just couldn't refuse.

"Wow," the British star remarked upon meeting Aniston onstage. "I feel like I've won a competition." (Seriously, could he BE any cuter?) And while their time together was over far too quickly, those precious few moments were more than enough time for my mind to start reeling with Sherlock and Rachel Green spin-off ideas. I mean, look, I know these two already have a lot on their plate as is. (And I certainly don't want to be responsible for delaying Sherlock Season 4.) But how great would it be like if these two iconic characters could combine to form one phenomenal TV series? What would that even look like? I have a few ideas…

There'd Be Tons of Sarcasm

Just imagine the constant banter these two could produce. Though you know they'd both eventually wear each other down and fall madly in love. (*swoon*)

Because obviously. I mean, just look at them. In fact, our televisions will probably explode from all the sexual tension these two could generate.

Even the Occasional Heart-to-Heart

Don't worry, Rach. Det. Holmes can make all of your guy troubles go away.

And Spot On Deductions

I guess what I'm trying to say here is that these two would be pretty fantastic together. So any chance of seeing both of them up on screen together is an opportunity worth taking.