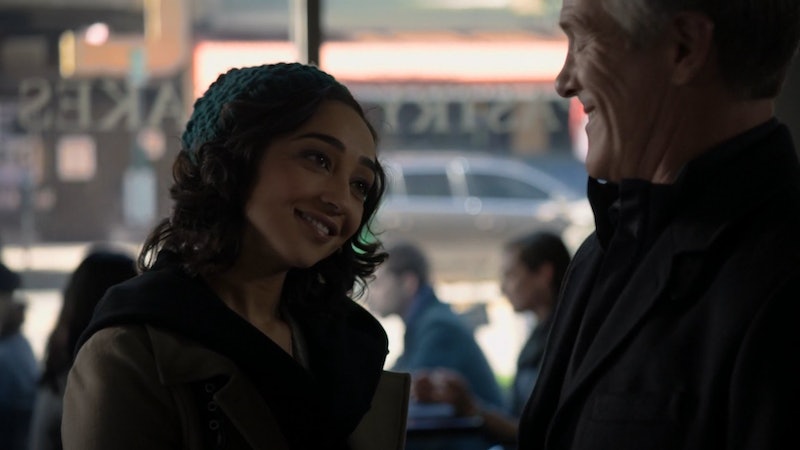 When Inhumans were just a whisper of a possibility on Agents of S.H.I.E.L.D., the prospect of Skye being alien royalty was very exciting. Now that we know Skye is actually the Marvel character Daisy "Quake" Johnson, what if Raina is Luna Maximoff, the Inhuman princess, instead? Perhaps without the "Maximoff" part. In the Marvel comics, Luna is the daughter of the Inhuman Crystal and Mutant Quicksilver. Quicksilver, also known as Pietro Maximoff, is played by Aaron Taylor-Johnson in Avengers: Age of Ultron, and is presumably too young to have fathered Raina. Then again, he was being held by Hydra agents and nobody from the Captain America universe seems to adhere to the laws of aging if they can help it.

It is widely speculated that, since 20th Century Fox has the right to most X-Men characters, Quicksilver and Scarlet Witch will be Inhumans instead of Mutants in the Marvel Cinematic Universe. In the bonus scene at the end of Captain America: The Winter Solider, we saw a minor Age of Ultron villain refer to them as "miracles." Having Luna on Agents of S.H.I.E.L.D. would help tie the Maximoffs into the Marvel Cinematic Universe and add the backstory we need.

Also, I would love for Ruth Negga, whose character likely isn't going to take to her new appearance all that well, to have a royal happy ending. Here's why I think she could be Luna after all.

All three names — Skye, Raina, and Luna — share similar elements, no pun intended. If Skye isn't Luna, you could apply the same name logic to Raina. Or, Luna will join the show later and the three will start a girl group or something like Josie and the Pussycats. I'd be down with that as well.

Let The Sunshine In

In the comics, Luna has gold eyes, just like Raina's post-transformation. Other characters in the Marvel Comics Universe that have yellow or gold eyes include Mystique, the villainous mutant called Feral, and the Hulk's former girlfriend Betty Ross. I have a fringe theory that Raina is an original character drawing from both Mutants Mystique and Storm, but I'm keeping that one to myself for now.

Luna's eyes only turn gold when she is using her powers. She is an empath who can see and control the feelings of others. For some reason, I still associate this power with Jasper from Twilight. This fits well with what we know about Raina. She's charming, flirtatious, and cares a lot about how her appearance makes others feel. Remember when Agent Coulson asked her why she always wore flowers, and Raina replied "who doesn't like flowers?" It's not about Raina. She has already locked into her Inhuman ability to control the emotions of others.

Another interesting tidbit about Luna is that upon receiving her powers, she was unable to control them and wore glasses at all times. She also went up against her grandfather, Magneto, which we could unfortunately never see in the Marvel Cinematic Universe.

The one problem with this theory is Raina's current appearance. I've examined this gif from every angle, and all I can see are spines coming out of her face (or whiskers, or horns, or a second pair of lashes) and a slightly feline nose. This doesn't describe Luna at all.

Nor is there any link between Luna and Raina's backstory about living on the streets of Thailand, running with a Dickensian crew that called themselves "freaks," and hearing stories of the Kree from her Grandmother. However, backstories are changed all the time, and I wouldn't be surprised if Luna's is altered to let Raina become her.