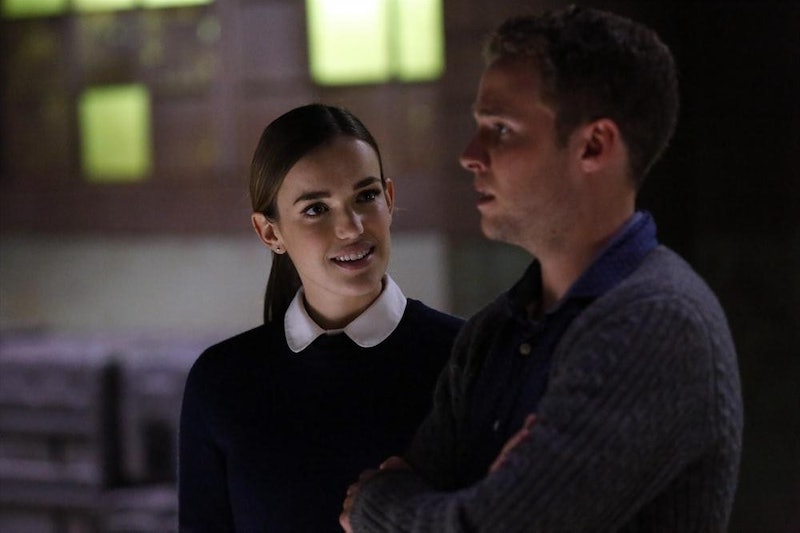 I don't know about you, but Agents of S.H.I.E.L.D.'s FitzSimmons is probably my favorite 'ship on TV right now — and they're certainly my favorite ship of ABC's Marvel series. (SkyeWard who? I don't care how creepily devoted he is, that 'ship has sailed). They're two lovely, awkward scientists, and they deserve love. I'm a firm believer that a romantic relationship is in the cards in the very-near future — this season, in fact. That said, how are we ever going to get there? What needs to happen to give Fitz and Simmons the push they need?

They are kind of stuck in limbo, after all — though, with the combined trauma of his all-in confession of love (seriously, that was an Austen-level declaration) and subsequent brain injury, it's no wonder that they're in something of a holding pattern. Even the real-life Simmons (actress Elizabeth Henstridge) believes things are going to be tough, as she said in an interview with Entertainment Weekly, "I don’t think they’ll ever get back to the way they were before." It's certainly an uphill battle, and — to borrow from scientific terms (that's what they'd want) — we're going to need a really strong catalyst to get the ball rolling. Now, what catalyst will end up precipitating into a relationship? Let's discuss.

Last season, it was almost as fun to watch Fitz steam over Trip and Simmons' flirting as it was to watch... well, Trip and Simmons flirting. Maybe if we turned the tables, and Fitz found a new crush (his millisecond-long crush on Skye from the first few episodes doesn't count), it would turn the heat up on Simmons, and she'd have to make a move.

Even though it was a near-death experience that got their relationship all boggled up in the first place, consider this: It is what got Fitz to confess his feelings — and last time Simmons almost died (remember when she caught that Chitauri disease back in "F.Z.Z.T.?"), it forced him to realize how he felt about her. Following that logic, maybe we need just one more near-death experience to push them over the threshold.

Hey — shared grief is what got the Avengers back together, after all. I'm not advocating for character death or anything (especially not on a Whedon show), but Trip did just die to serve Skye's angst-ridden superhero origin arc — might as well kill two birds with one stone, and have him be the catalyst for FitzSimmons, right?

No matter how it happens, I'm hoping it happens soon — like, yesterday.

More like this
20 Photos From The 'Stranger Things' Season 4 Premiere To Make You Feel Old
By Alyssa Lapid
Oops! The 'Stranger Things' Monopoly Game Has Spoilers For Season 4
By Alyssa Lapid
'Obi-Wan Kenobi' Takes Place After This Key Star Wars Movie
By Arya Roshanian
'Gentleman Jack’s Cast & Crew Are Keen On Season 3, Too
By Frances Stewart
Get Even More From Bustle — Sign Up For The Newsletter