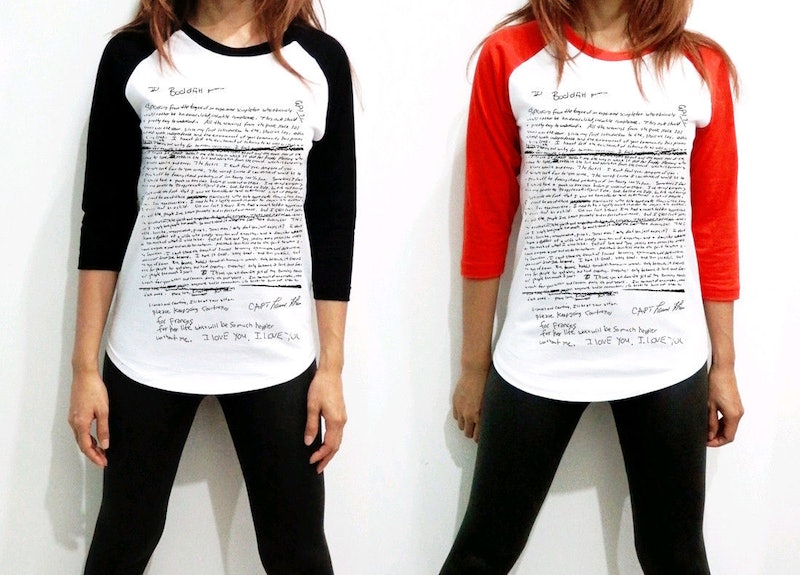 There is some sh*t you just do not do. Sell t-shirts printed with suicide notes — especially the real suicide notes of real, once alive human beings who killed themselves — for example. "Duh, Erin, why are you telling me this? No one needs to be told not to profit off of suicide." Except apparently people do need to be told. The people who are selling t-shirts with Kurt Cobain's suicide note on them, for instance (h/t to Styleite for showing me how horrible human beings can actually be).

Apparently, some A-hole thought it would be a good idea to get the Nirvana frontman's suicide note blown up and printed on totally stylin' baseball tees and tanks and attempt to sell them via Etsy and eBay. A Redditor discovered the offensive shirts, leading to the removal of the Etsy listing, so thank god for small mercies. However, you can still find them for $25.19 on eBay, should you be clothes shopping for the troubled teen with the "Smells Like Teen Spirit" stick and poke tattoo in your life.

Look, I know it's fashionable to romanticize the deaths of famous people, but that doesn't mean its the right thing to do. In my opinion, this is right up there with the bloody-looking Kent State sweatshirt that Urban Outfitters tried to offer in September. Not. Cool.

Don't, under any circumstances, purchase this shirt. But, if you must see what it looks like, here ya go:

There you have it, folks — the first, but probably not the last, horribly offensive retail mishap of 2015.