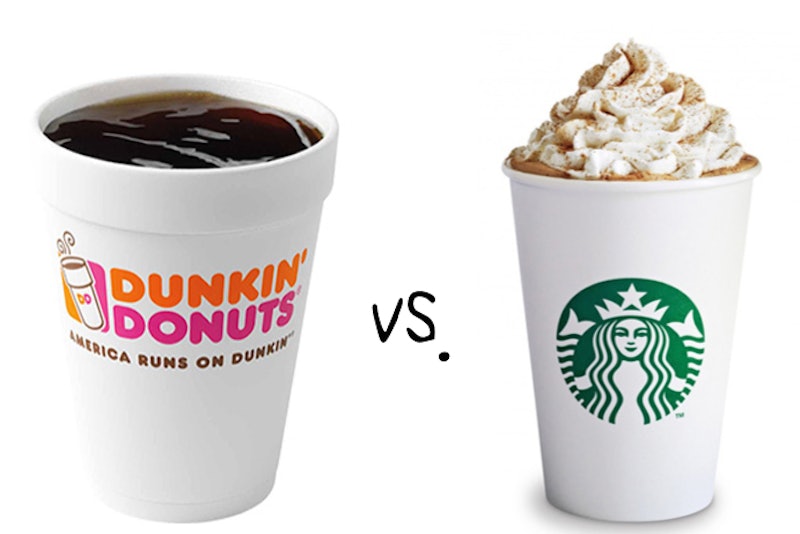 I’ve never really felt a particularly strong loyalty to any single coffee chain; as long as it can caffeinate me, anything else it has is just a bonus. But some people are fiercely dedicated to their chain of choice, and in case you needed proof, just take a look at this map: It shows where Starbucks and Dunkin’ Donuts are more popular throughout the contiguous 48 states — and as it turns out, there’s an extremely pronounced geographical divide. This is perhaps not surprising; it kind of hits you all over again when you see it laid out like this, though, so let’s take a look, shall we?

Created by Redditor cingraham, the map seen here took its inspiration from Flowing Data’s “Coffee Place Geography” post from March of 2014; the difference is that while Flowing Data’s maps showed data from eight different coffee chains in the U.S., cingraham’s focused on the two (arguably) biggest ones. Using data pulled from POI Factory, cingraham tallied up how many Starbucks and Dunkin’ Donuts locations there are in every region of the country, determining which areas had more of which store and placing them all on a handy-dandy map. The number of stores in each place are represented by hexes colored either purple or green — purple for DD, green for Starbucks — with the bigger hexes representing higher numbers of stores. While Starbucks has a few spots that are hotter than others (sections of California and the Pacific Northwest, for example), it seems to be spread out across the country in a way that Dunkin’ Donuts hasn’t — but Dunkin' definitely reigns supreme in the Northeast, as well in other areas along the eastern seaboard like Florida. Check it out:

Although it’s clear that there’s a regional coffee chain divide, the reasoning behind said divide is a little less distinct. It likely has something to do with where each chain began life; Starbucks originated in Seattle, while, as Redditor ilessthan3 pointed out, Dunkin’ Donuts was born in Massachusetts (in Quincy, to be exact):

I’ve had a long-standing theory that in New York, you can probably traverse the city jumping from Starbucks to Starbucks, with the next ‘Bux always in sight from the last one. I imagine the same is true of most places in and around Boston — or at least, the ones bigger than the town in which I grew up, which had exactly one Dunkin’ and exactly one Starbucks. The Dunkin' didn’t even move in until I was in high school, but that might have more to do with the town’s inherent dislike of anything remotely chain-like. It ruins the historical small town charm, you see. But that aside, it’s still interesting that, despite the West Coast/East Coast origin stories for both chains, Starbucks has apparently managed to expand its reach quite a bit further. Dunkin' Donuts finally arrived in Southern California towards the end of 2014, though, so maybe it’s just a matter of time before it catches up.

Want to see something really hilarious, though? Check out how tiny some of the other coffee chains out there look in comparison to both ‘Bux and DD at Flowing Data. Sorry, Tim Horton’s. Looks like you’re just not cutting it for most of the country.