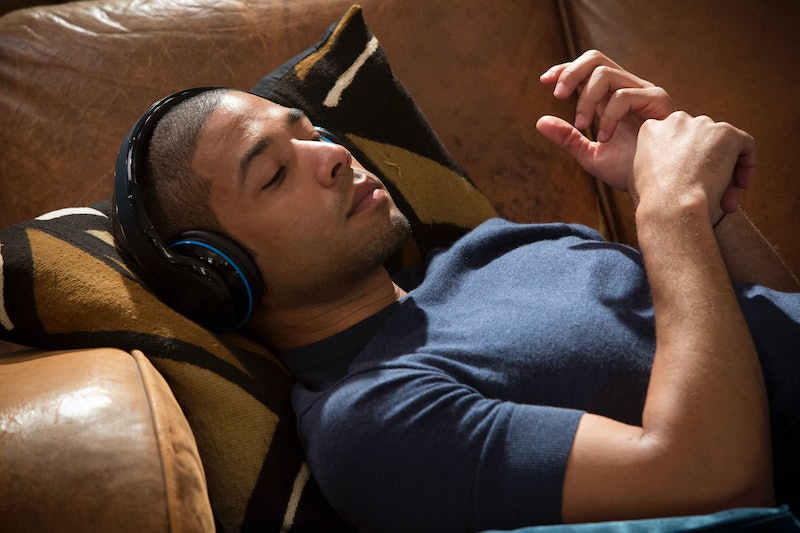 Did you know that way before Empire, star Jussie Smollett had a music career? He's Jurnee Smollett-Bell's older brother, and '90s kids might recognize him from a little movie called Mighty Ducks . However, the 31-year-old actor was making music far before he played Jamal Lyon. That's what he's been up to since his Disney days, and it is paying off big time. This role on Empire must be a dream come true for a triple threat like Smollett.

According to his official Facebook page, Smollet was an artist with Wired Music Media, and also worked with Artists for a New South Africa. In 2011 and 2012, Smollett recorded an EP album called Poisoned Hearts Club, which appears to have been taken off of both iTunes and Spotify. Never fear! You can still support his music online and by watching the the Fox series.

On Empire, the former child actor plays the middle child of the Lyon dynasty. He's an anti-corporate, gay singer-songwriter, and to say that he's under-appreciated in his family would be an understatement. This series is, in part, based on Shakespeare's King Lear, so Jamal is the Cordelia of this story. He's also already a fan-favorite to win this Game of Thrones-like battle for hip hop family domination.

In a promotional interview about the EP, Jussie Smollet talks about his musical past and future.

I've been singing all my life. As soon as I could write, I would write songs. I would write little things and I put it songs and I did that all the time. Yeah, so singing and songwriting have always been a part of my life. It's who I am. It's just what I do!

He also revealed in the interview that he and his siblings were in one of Lenny Kravitz's first videos, which was directed by Lisa Bonet. So cool! He also talks about being in the middle of six siblings — so he must be able to relate to that part of Jamal's struggle. If you're into Smollett's sound (which you totally should be), here's a sampling of his work.

This is a video from Poisoned Hearts Club that was released in 2011, and Smollett's look is very different from his current one on Empire.

Smollett is also featured on this catchy 2012 track from DJ Gina Star.

Here is a performance from the Empire pilot to compare. It's a slightly different style than Smollett's personal music.

"Live In The Moment"

Not everything is doom and gloom on Empire. Maybe this doesn't need to be a rivalry? Let's all get along.

Oh yeah, there was no way I wasn't going to share this video. Don't doubt that Smollett has vocal talent without the autotune.

I'm definitely looking forward to more music from him and the rest of the talented cast of Empire. Maybe they should do karaoke in an upcoming episode...