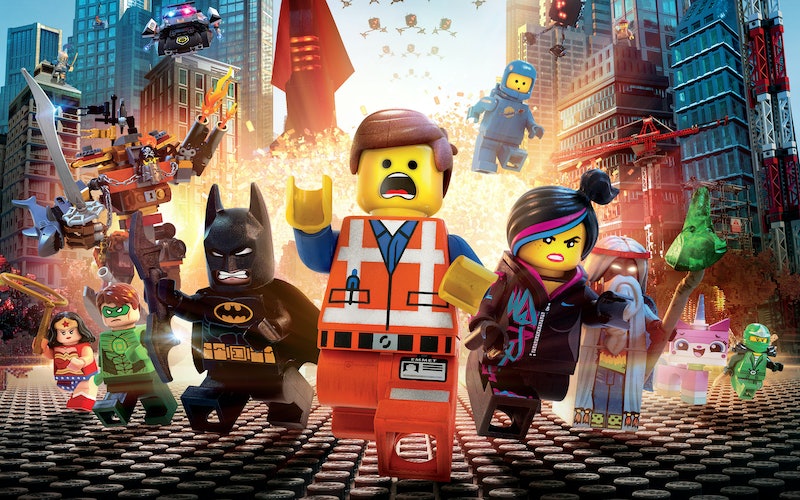 There are two kinds of people in this world: those who have seen The Lego Movie and those who are seriously missing out. And those of us in the first group were faced with a serious injustice Thursday morning: The Lego Movie was not nominated for an Oscar in the Best Animated Feature category. Seriously, WTF? Of all of the animated movies that actually did snag noms, none of them come anywhere close to how good Lego was. Listen, I haven't seen Big Hero 6 yet, but I'm sure it was good. However, I doubt it can touch the cast and the writing that proved animated movies can be just as good as live action ones — and that they aren't just for kids, either.

I should be way less surprised at this than I am. After all, Jennifer Aniston didn't get nominated for Cake , either, and I thought it was one of the best movies of the year. So if you're a little confused as to why people seem to be so outraged that The Lego Movie didn't receive the nomination it totally should have, or if you're outraged yourself and want to stew in your anger, you've come the right place. This is one of the biggest snubs the Oscars is going to hand us in 2015, and here's why.

It Had an All-Star Cast

Seriously, everyone voiced a character in this movie. Chris Pratt, Elizabeth Banks, Will Ferrell, Will Arnett, Alison Brie, Morgan Freeman, Channing Tatum, Jonah Hill, Liam Neeson... I could go on all day.

The Writing Was Phenomenal

And personally, I don't know if I've ever been as invested in what will happen to a Lego as I was the first time I watched The Lego Movie. It was funny, it was smart, and in case you haven't noticed, it received rave reviews. Also, Batman. Everything Batman said was hilarious, and the ongoing joke that Superman (voiced by Tatum) was so done being friends with the ultra clingy Green Lantern (voiced by Hill) was perfect.

It Had to Take Forever to Make This Movie

Everything in the movie is meticulously detailed. Not once did the animators skimp out or cut corners. Every single thing is a Lego. Every movement is how a Lego would move. I hope the people responsible for this were paid really, really well.

It Has Something for Everyone

The familiar toy, the action sequences, and the simplistic plot are for the kids, and the jokes that fly directly over their heads are for the parents that took them to see this movie. I haven't seen a film do this so masterfully since Toy Story, and that's a big deal.