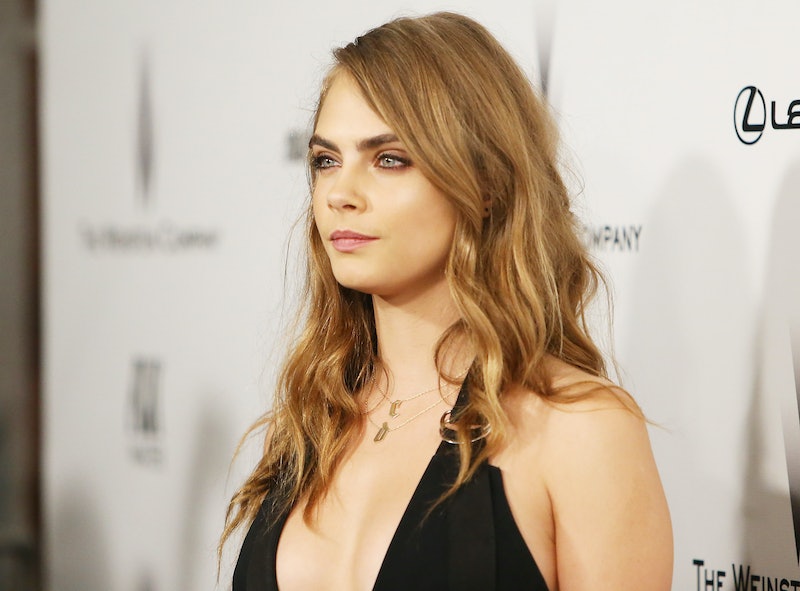 Over the past week alone (give or take a few days), Cara Delevingne has been making headlines like crazy — first, there were the DKNY sleepwear advertisements (that totally blew Justin Bieber's over-photoshopped Calvin Klein ads out of the water); then there was her Instagram fan-casting of the Spice World sequel (in case you're wondering, she's Scary Spice); and now? Well, she just played the epic card with the new SS15 campaign for DKNY — by starring in the menswear and womenswear ads.

This is not Cara's first maverick move with the brand — last year, she made waves by using social media to cast the advertisements for her capsule collection: Cara Delevingne x DKNY (there's just no beating this babe for hip factor, is there?). Anyway, she's kind of heartbreakingly cool in both sets of the new advertisements. In the women's ads, she's rocking a fashion-y, Pippi Longstocking-esque look in bright colors and bold stripes, and in the men's ads she's wearing that suit like there's no tomorrow.

The male ads are especially cool, however, because she hits the perfect note of androgyny — the images strike just the right balance between masculine and feminine. We're used to seeing women in suits with power lipstick and their hair swept back, but Cara's minimal makeup, unkempt hair, and cooler-than-cool platform sneakers makes this look something entirely new. So let's take a look at the two ads: